YA Wednesday: Julie Buxbaum on "Hope and Other Punch Lines"

One of our editors’ picks for the best young adult books of May is Julie Buxbaum’s Hope and Other Punch Lines.  While I have loved Buxbaum's previous books, Tell Me Three Things and What to Say Next,  I think her latest might be my favorite…

Buxbaum's novel is about 9/11, first love, friendship, loss, and change.  I fell for her characters right away--Abbi, who became a symbol of 9/11 at the age of one, and Noah, who's father was lost when the Towers collapsed.  The relationship that develops between them, and discovering what each is searching for and what they fear, is beautifully told.  Hope and Other Punch Lines is wise, funny, and heartbreaking.  I loved it. We asked Julie Buxbaum to share some of her inspiration for the novel:

If you had told me five years ago that I’d write a novel that had anything to do with 9/11, even tangentially, I wouldn’t have believed you. For a variety of reasons—personal, political, practical, emotional—that day had always seemed completely off-limits. It was too big and too scary and too upsetting to touch. A Pandora’s box I didn’t dare open. Until one day, suddenly the opposite felt true, which is, I guess, how all stories we find ourselves needing to tell are born.

The masochistic part of all of this wasn’t unusual for me. Writing is my way of making sense of the world, so I often use my work to tackle what I don’t want to face. My favorite playground as a writer is that weird space between light and dark where I can laugh to make sense of my pain. Unlike with my other novels, though, Hope and Other Punchlines didn’t start with some personal existential crisis or burning question; it started, weirdly enough, with a tweet from a teenager. Though I can’t remember exactly what she said, the gist was a complaint about how annoying it was to have to learn about 9/11 in school every year on the anniversary.

I’m not going to lie: when I read that tweet, I burst into tears.

I carried that moment in my subconscious for a while, which is also something we writers do. We marinate without noticing. And it occurred to me that what feels like yesterday to me—that defining moment that split our entire world into a before and an after—feels like ancient history to the vast majority of teenage readers, many of whom were babies or hadn’t even been born on 9/11. So here’s where that urgent demand to write this story came from—the thought that there is this whole new generation who need to understand not only what happened on September 11, 2001, but also that the legacies of that day are far from over. People are regularly still dying from 9/11-related illnesses.

I wanted to share this information in a way that would be digestible and accessible for young people, through a book that they could not only metabolize but also enjoy. Because underneath all the pain, I also wanted to write a novel that was deeply funny—to play in that wonderful liminal dark/light.

This is a novel about a girl and a boy and what happens when the stories we’ve told ourselves turn out not to be true. What do we replace them with?

This is a novel about the legacies of loss, about first love, about friendship, about using comedy not only to mask pain but to burrow our way through it, and also, of course, about befores and afters. I hope readers will laugh as often as they cry, and sometimes laugh through their tears.

Writing this book often felt impossible. Yet, like the writer-masochist I am, I did it anyway. And now that we are here—now that Hope and Other Punchlines is an actual book that answered the call of a random tweet—I couldn’t be more proud of it.  —Julie Buxbaum 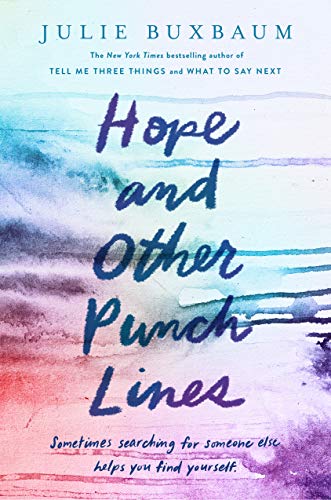