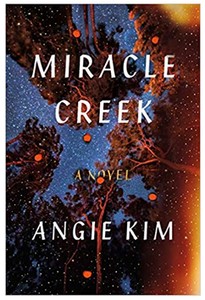 The Yoo family are Korean immigrants plying an unusual trade, running a pressurized oxygen chamber participants use in the hopes of improving conditions ranging from autism to infertility. When a horrific explosion at the facility leaves two dead, the case against the alleged culprit is not as open and shut as it first appears...Angie Kim’s intricately-plotted courtroom thriller, Miracle Creek, isn’t a conventional whodunit where the bad guy is eventually unmasked and the reader closes the book with righteous satisfaction. Kim has weaved a more complicated web than that, one that ensnares characters many readers will empathize with--well-meaning but flawed, doing foolish things for noble reasons--and that only adds to the suspense. Here, Kim talks about how a drawing included in the Asian American exhibition at the Smithsonian National Portrait Gallery inspired the writing of this impressive debut.

In April 2012, I attended the first-ever Asian American exhibition at the Smithsonian National Portrait Gallery and was mesmerized by My Life Strands, a charcoal drawing on a paper scroll—a long braid of coarse black hair, coming together tighter and tighter until the three strands became one and flowed onto the ground like a winding river. I started working on my novel, Miracle Creek, that summer, and this image stayed with me as I wrote, until ultimately, my novel became the literary equivalent of that drawing: a story woven from three of my life strands that are elemental to who I am today.

The first strand is my childhood as a Korean immigrant. When I was eleven, my parents and I moved from Seoul, South Korea, to Baltimore, where I lived with my aunt and uncle while my parents ran and lived in a grocery store in a dangerous part of downtown Baltimore. I went from feeling like a smart girl with close friends in Korea to being a foreigner in an American middle school, not speaking or understanding the language, not wearing the right clothes, not knowing anyone. I lost my voice. There’s a lot of that formative experience in the story I tell about Mary Yoo and her family’s struggle to adjust to America and the way they lost their closeness with each other along the way. 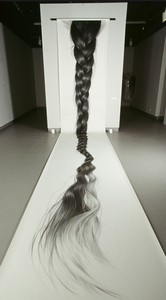 The second strand comes from the last 15 years of my life, as the mother of three children with wide-ranging medical issues that required, among other things, hyperbaric oxygen therapy (HBOT). My son was four years old when he was diagnosed with celiac disease and ulcerative colitis. The standard treatments weren’t working—he was crying that his stomach hurt and throwing up and losing weight, the outlines of his ribs protruding through his skin—so we decided to try an experimental treatment I’d heard about, involving breathing pure oxygen inside a pressurized chamber. The first time we saw the HBOT chamber, with its thick steel walls, portholes, and hatch opening, my son said, “It’s a submarine!” (We’d watched the Beatles’ Yellow Submarine for family movie night earlier that summer.)

We went into the submarine twice a day for hour-long “dives” that summer, sealed inside the group chamber with three other families. Because of the presence of pure oxygen and the risk of fire that entailed, we couldn’t bring anything in—no phones, toys, electronics, magazines—leaving us with nothing to do but talk. We shared life stories and traded information about the various illnesses our kids were contending with. It was a wholly immersive and intense experience, and later, when I started thinking about writing a novel, I thought immediately of the submarine, the intimacy and confessional honesty that developed in that dark, sealed environment.

The third and final strand that brought all the threads and characters into a coherent whole was my experience as a trial lawyer, which gave me the tools to structure Miracle Creek around four days of a murder trial. As a foundational matter, once I decided to explore the aftermath of a horrific tragedy, it seemed natural to have a criminal trial anchor the story, given my familiarity with courtroom procedures and what I’ve seen of the heightened interpersonal conflicts that setting can produce. The courtroom’s demand for “the truth, the whole truth, and nothing but the truth” can rattle even the most confident witness and have them questioning their own memories and the blurry line between insignificant omissions and outright lies. And although I considered advancing the mystery element of the plot through other vehicles (such as private-eye or police investigations), the inherent drama of the courtroom—the witness on a raised platform telling their stories to an audience—and the couldn’t-be-higher stakes of the death penalty ultimately convinced me that the courtroom would be the best setting to maximize the suspense and tension.

By braiding these three life strands into one narrative, I hope that I’ve been able to create not only an exciting who-/how-/why-dunit with all the theatrics and surprising twists inherent to courtroom dramas, but something more: a deep dive into the lives of immigrant families and of parents of children with special needs and illnesses, both groups isolated and exhausted by the sacrifices they’ve had to make, desperate for connection. These are two groups that are growing and especially pressured in today’s climate, and I hope that my novel can help to make readers aware of those challenges and to build empathy for them, even a little bit.

Sonia Purnell on "A...
Read