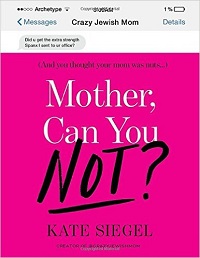 Mother's Day is quickly approaching. (That would be May 8th this year so make sure you add it to the calendar… now. And also, you're welcome!) In the spirit of the season we asked Kate Siegel, author of the new book Mother Can You Not?, and her mom, Kim Friedman, to get things rolling with a @CrazyJewishMom inspired piece. Siegel and Friedman are the mother/daughter duo behind the (hilarious) Instagram sensation @CrazyJewishMom where Siegel posts screenshots from she and Friedman's text conversations, inspiring Siegel’s new book and a knowing nod and laugh from the many daughters that can relate all too well.

What do I want for Mother’s Day? Easy! To spend it with my brilliant, talented daughter! That might sound obvious, but last year my spawn decided to spend Father’s Day with her BOYFRIEND’S family*, so it’s clearly not a foregone conclusion. A boyfriend, I might add, who has been dating my daughter for two years and refuses to commit to her, but we’ll get to that later…

*Note from her “spawn” (Kate): For the record, the reason I chose to spend Father’s Day with my boyfriend’s family last year was because my mother decided to schedule a colonoscopy for my dad on the morning AFTER Father’s Day. We agreed to celebrate at a time when my father wouldn’t be on the can the whole time.

So, I’m going to write my dream Mother’s Day wish list, and Kate will respond. 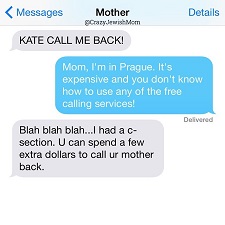 1. Would it kill you to visit?

Kim: I’ll say this again: Her presence would be the best Mother’s Day gift I could ever ask for. I know she’s a big bestselling author now, but I was sliced, no, ripped open from my boobs down to my baby cannon to bring her into this world, all but bathed in her puke for years, and acted as her own personal chauffeur for the first sixteen years of her life. After all that, you would think she would want to spend time with me, but she’s busy. I get it.

Kate: Have to love the preemptive guilt trip! I will be visiting home for Mother’s Day. Hoping for minimal “baby cannon” talk, but realistically that’s going to be a big part of the day. 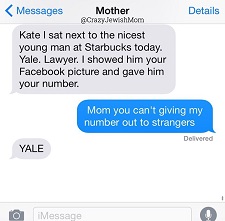 2. No ring on the finger, you must not linger!

Kim: It’s enough already. She’s been dating her boyfriend (Superjew) for two years, and there’s no ring in sight. Nothing would make me happier on Mother’s Day than for her to tell me she’s dumped him and is focusing on her career and meeting new hunky Sperminators. She wants a baby someday, and she’s not getting any younger. No more wasting time in a dead end relationship. Oh! Better yet, she could tell me that she’s ready for me to set her up with the long list of manmeat I have waiting to date her.

Kate: False. Here are a few things I could tell her that would make her happier. 1. “I invented an app that is being acquired by Google.” 2. “I went to a sperm bank for Ivy League educated sperm donors, and now I’m pregnant!” 3. “I’m engaged.”

Sadly, I will not be telling her any of these things on Mother’s Day. 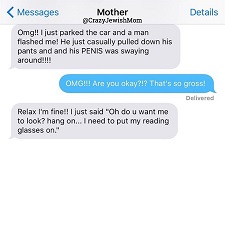 3. Move. Or at least promise to carry her rape whistle at all times.

Kim: My daughter lives in an apartment (hovel) in Brooklyn, so disgusting the roaches don’t even bother hiking up the four flights of stairs to her door. Did I mention that she has a family of mice living under her stove? And her horrible, mason jar-riddled DEATHTRAP of an apartment aside, I worry about her walking home from the subway at night in that neighborhood. I’ve bought her lipstick shivs, pepper spray, tasers galore, and she refuses to carry them with her. If she would promise to carry a weapon in her bag, I would never ask her to visit again. Best Mother’s Day gift I could ask for!

Kate: First of all, she would definitely still ask me to visit, and I hate to disappoint again, but I will not be agreeing to this one either. I have proven a danger to both myself and those around me when carrying these weapons. I’m extraordinarily clumsy. 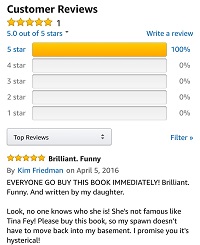 Kim: So, my daughter wrote a book. She is a New York Times Bestselling Author. Fabulous. Couldn’t be more proud. She also has no health insurance. A 401 K? Dream on! My daughter left her stable corporate job to be a writer without dental benefits or a savings account, a.k.a. my worst nightmare. The last thing I need is for her to move back into my basement and become another unemployed millennial statistic. Would love for her to get a job at Facebook. Become the president of Google. Or help me with my MariJEWWana startup business idea. That would be a wonderful Mother’s Day present. Every woman needs to think about her career above everything. And I’ll say it again…Kate is unemployed.

Kate: First, I do have health insurance (don’t fine me, Obama!). And while we agree that career is important, my mother has an AOL email address and shares articles she finds interesting on Facebook by screen shotting and posting a picture of them. So, if she doesn’t understand links, she’s not going to understand what I do for a living. I’m confident in my current career trajectory, so this will be another Mother’s Day disappointment. 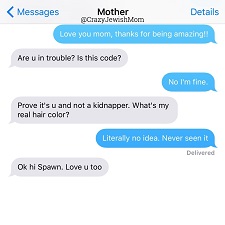 Kim: I would not.
Kate: Neither would I, so that’s the plan. 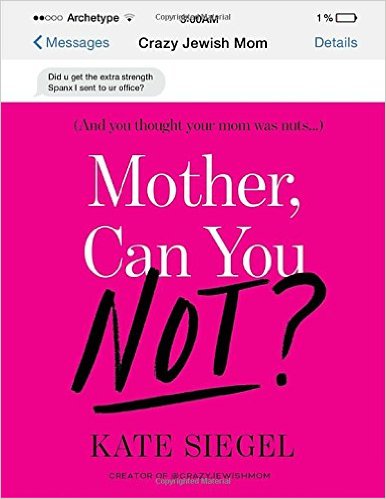 Mother Can You Not?
Kate Siegel
Print Book Kindle Book