The Best Books of the Year: "The Great Alone" 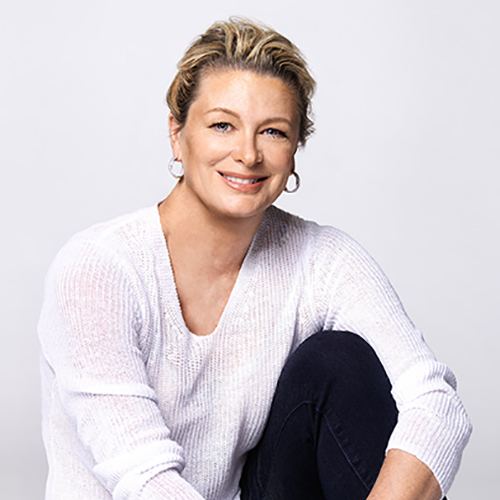 Kristin Hannah's The Great Alone thrilled (and chilled) us with its tale of both fractured family and psyche, making it one of our favorite novels of 2018. Here's our interview with Hannah, originally published on February 5, 2018. 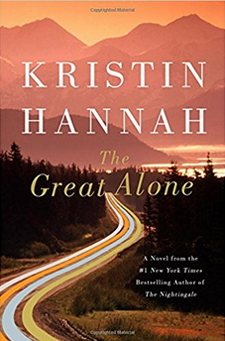 Not sure if it was on her bucket list, but Kristin Hannah can now boast that she was featured on the trivia show Jeopardy! I was watching Friday eve (don't judge) when the answer appeared on the screen, mentioning The Nightingale and two more of her most popular titles. Having already had the opportunity to read her latest, The Great Alone, our Spotlight Pick for February, I couldn't help but think that that clue was written prematurely. In it, a damaged vet named Ernt Allbright returns from Vietnam and moves his family to the wilds of Alaska. Initially it's a welcome change, but as winter approaches, and Ernt's mental state deteriorates, his wife and daughter find themselves in an increasingly precarious position. We recently sat down with Ms. Hannah, who is awesome, to chat about Alaska, the "Me Decade," mile marker books, and much more. This is a transcribed version of our conversation.

E.K.: Your family has ties to Alaska thanks to your dad who is quite the intrepid explorer. He moved there in the early 80s and befriended some homesteaders...

K.H.: My dad has been an adventurer my whole life. When I was 8 years old, he put all of us kids and our dog into a Volkswagen bus, we drove through sixteen states looking for the prettiest place we could find, and he told us to raise our hands when we thought we were home. That was a six week trip and we ended up in the Pacific Northwest and British Columbia. At some point, things started getting too crowded for him, so he went to Alaska and met this lovely woman who was from a homesteader family. They joined forces and built a fishing lodge on the banks of the Kenai river. They’ve been doing that now for 30 years; three generations of my family have worked at the lodge, and I’ve been going up there as much as I can to see this state that is like no other.

E.K.: But for the Vietnam and bell bottom references, you start to forget that The Great Alone takes place in the 1970s; there are an alarming number of parallels between that time and today that make the story feel very current.

K.H.: I’m the same age as Leni in the book. But it was really interesting when I started the research on the social and political unrest of the 70s--the hijackings, the terrorism…As a teenager, I was less aware of these things, so when I came back to them as an adult and started really looking into the turbulence of the times, it really struck me, it really hit home, that this was relevant; that’s what made me decide to set this book in this time.

E.K.: Ernt Allbright is a complicated character. If you absolutely have to identify a villain in The Great Alone, he's it. And yet, he's a Vietnam vet, he was a POW--the war warped him. If this story took place today, we would say, Ernt has PTSD, we can treat that...

K.H.: Coming of age during the Vietnam war, I wore a missing in action bracelet for a soldier who never came home--he was the father of my best friend. I’ve always been really, really aware of the way we treated the vets who came home and it has stuck with me as something that needs reminding, and needs addressing. I find it interesting that you call Ernt a villain, and I’ve heard that from other people. It never once occurred to me in the writing that he was a villain. I know that he does terrible things, but I always felt that he was just so broken, there was undiagnosed PTSD—none of which, of course, excuses anything that he does. But, to me, he was just more damaged, at least up to a certain point. I really think that one of the great things about this particular moment in time is, we’re talking about women’s issues, and women’s history, on a national and international scale; I really think that domestic violence and domestic abuse and coming of age in those sorts of households is something that needs to be part of the national conversation as well, because we need to understand how these situations happen, why women stay, and how to get women the help that they need to get out.

E.K.: One of the ways the young heroine in the story, Leni Allbright, copes with the chaos around her is with books. She loves to read, books are her safe place, and she talks about how they are the mile markers of her life. Is this true for you as well? You wrote about Tolkien with such affection that I felt like I was reading your journal, not hers.

K.H.: Well, basically everything Leni read in this book were my mile markers; You can start with Charlie and the Chocolate Factory, the Oz books, working up to S.E. Hinton and The Outsiders, moving towards Tolkien (which took me out for, like, eight years). And then Stephen King…Stephen King was the bridge author. I came to Stephen King as a kid and I left Stephen King as an adult and moved onto reading other things. But, as a child, because my dad was such an adventurer, we moved around a lot, and I was always the new girl in school; I brought a lot of that emotion to the character of Leni, and it really was books that helped me navigate the wonderful world of junior high when you’re changing schools a lot.

E.K.: There are some badass women in this book, including a wonderful character named Large Marge. Please tell me she is based on a real person, because I want to believe there are people like that out in the world...

K.H.: They are out there in the world and they’re specifically living in Alaska. You can walk through Homer Alaska and you can meet a woman walking down the street whose wearing overalls that don’t fit and has a parrot on her shoulder and she is a former district attorney from Washington D.C. The thing about Alaska is, you get to be who you want to be up there. I think it’s the last American frontier, and the thing about being a pioneer and going to the ends of the earth is, you really get to redefine who you are and what you want and everything is acceptable. It is totally ok in Alaska, even today, to have a PhD from Columbia and still take your showers at the laundromat; that is a normal thing up there. I think it’s really important to show that the kind of people who want to live off the grid, who can handle this terrible, beautiful, remote landscape are a very special group of people. It was important for me--especially in light of Ernt, because I was writing about a dangerous man who was adversely affected by this environment--to show the beauty of Alaska as well, and a big part of the beauty of Alaska is the people who choose to live there.

E.K.: The Great Alone is a pressure cooker of a page-turner, but it's also a big-hearted novel that shows that even the most self-sufficient need help sometimes. Is this one of the main messages you want to drive home?

K.H.: That's the pioneer spirit: yes you can go out there, you can stand on your own. But these characters discover as they’re out there that they do need help and they do need other people. I think that kind of isolation also puts relationships under a crucible. Perhaps not all relationships survive, but I think the ones that do are as strong as steel and durable. I also think of the book as a mother-daughter love story as well; these two women have an extremely difficult life. The mother makes some really poor choices and they end up having to live with the price of those choices. But these two women love each other profoundly, and look out for each other, and I think I haven’t done a lot of stories like that. It’s partially because I lost my mother really early and so that particular kind of relationship is fraught for me and emotional, so it was really nice to be able to write a mother-daughter love story.

E.K.: I changed my mind about this, every other page, but do you think The Great Alone helps or hurts Alaskan tourism?

K.H.: (Laughs) That is a fascinating question! I was actually concerned about that. I love the state, and, because my family is so anchored there, I really wanted to write something that was pro Alaska. So, everybody who read the early ARCs [advanced reading copies], I’m like, does it make you want to go to Alaska? Do you like Alaska? What do you think? Interestingly enough, I would say overwhelmingly the book seems to make people want to go to Alaska, and want to see it. So, I think that’s a positive. I’m not sure that it convinces people that they want to live there.