How I Wrote It: Colum McCann, on "TransAtlantic" 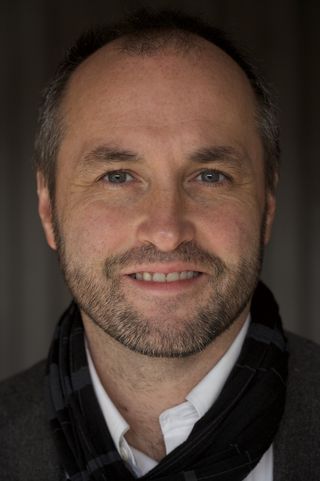 I am half Irish and a naturalized citizen of Ireland, and I’ve often read the work of Irish writers, hoping they'll help explain to me my grandmother (now deceased) and my ongoing curiosity about the wounded land of her childhood. Like the core character in National Book Award winner Colum McCann’s brilliant new novel, TransAtlantic, my grandmother fled to America to start anew. A true "Bridget," as Irish maids were called, she tended to Upper East Side households as a young woman in the 1920s. She never returned to Ireland. When I traveled there after college, hitchhiking around for a month and visiting her hometown, my Bud-in-a-can-drinking grandmother was baffled that I’d want to spend time in “that s**t-hole.”

What I love about TransAtlantic (one of our Best Books of the Month), is that it’s McCann’s most Irish novel to date, but also a story whose characters are primarily strong Irish and Irish-American women. Yet, like most of his stories, it’s more about his adopted home than his homeland. McCann is an Irish writer who writes more authentically about America than most American writers.

I spoke with McCann at last week’s Book Expo America in New York. Fittingly (for a book called TransAtlantic), he had just flown back from Ireland the previous night. Unable to find a proper drink at the Javits Center, we sat drinking fruit smoothies, discussing the trans-American bike trip he took at age 21, an epic adventure that formed his sense of storytelling. “That’s where I learned the true value, the true meaning of what it meant to share and exchange a story,” he said of his months on the road. “And even though I never wrote about it directly, I’m still writing about it…”

Below is a Q&A I conducted with McCann via email, prior to our interview. Scroll down to watch the full video interview. (And here’s the first interview I did with Colum, in 2009). 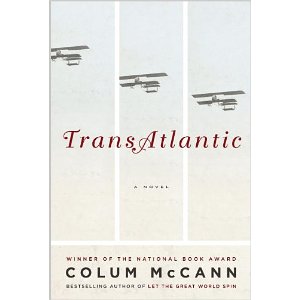 I write in the closet. Literally. I redesigned my office so that it has a wraparound desk, so I pushed the desk backwards into a cupboard. And then I decided that I liked sitting on the desk, with my legs outstretched, in the … well …yes I admit it ... the closet. With a laptop on my knees. And there are loads of photographs about. Knick-knacks on the shelves. A portrait of James Joyce. A photo of myself with Peter Carey and Nathan Englander together. Old family portraits. When friends come to my office they write on my wall. Intelligent grafitti. I like the space because it’s so tight. It focuses my vision. No windows. When I edit, or if I am working on a journalistic project, I come out of the closet and work at the desk like a normal human being.

I wish I could say that I write with pens or pencils on old foolscap paper, with inkpots and blotting paper and all that fantastic paraphernalia, but I write directly on a computer. In fact I find it difficult to write by hand. I am very disappointed by this. Perhaps one day I will try to write by hand like I used to do when I was a child, but I’ve been a journalist since I was 17 years old and therefore have been writing directly on a keyboard for over thirty years. I have an old battered laptop full of crumbs and bits of fallen (truth told, lots of fallen hair). I don’t have any fancy computer programs or writing rituals except of course tucking myself away in the closet.

I recently worked with this fabulous musician from London, Moss Freed, who made an album called “What Do You See When You Close Your Eyes.” He wrote music and linked it to literature. He uses a series of short stories matched to his music which is a really finely-blended jazz with folk themes and rough-edged classical arrangements. His point is that both are inextricably linked, they are enhanced by one another. He says it’s like listening in 3D.

And I listen to music as I write. Van Morrison and Lisa Hannigan and Joe Henry and Brian Kennedy were all fundamental to stretches of my most recent book, TransAtlantic. I put the music on my Ipod dock and let it move through the room. But I’m an old fogie, really. I wish I could still listen to 33 rpm records. And I have hundreds of old cassettes that lie around, unused.

Music and rhythm, they’re fundamental to what I do. I walk around my apartment reading things aloud. My kids think I’m nuts.

Early morning it’s just a cup of coffee and a slice of toast. The crumbs get in the keyboard. There’s my life in a nutshell really. I just discovered my epitaph. “The crumbs got in his keyboard.”

I don’t like to drink and write. It tends to force me into the ditch. Late at night, if I have a jar or two under my belt, I will do a bit of editing, but it’s dangerous to be altered by alcohol. Of course young writers seem to think that’s it’s the necessary fuel, but it’s not.

But writing is writing. It has nothing to do with food and drink for me, though of course they work as perfect metaphors for the written word. In the end you have to stay healthy. I'm becoming more and more interested in what fuels my body also by necessity fuels my imagination. I haven’t taken any direct steps towards really healthy eating. I'm not a vegetarian or anything, but my daughter Isabella is, and I think she's influencing me to think about what sort of fuel goes into the engine.

I like to read poetry to prime the pump. Anyone at all really, but a lot of Jim Harrison, Wendell Berry, Seamus Heaney, Dylan Thomas, Hopkins, that sort of deeply layered language poetry. I find them very useful especially when I am lost. I try not to worry about influence, but the thing is that we get our voice from the voices of others. So inevitably there will be echoes there.

As for escape, I only escape into the best. Ondaatje. Doctorow. Carey. DeLillo. Morrison. Erdrich. Rushdie. O’Connor, Hemon, Doyle, Bloom. But I hate this, talking about favourite books and authors because I always leave somebody out. I read promiscuously but only because there is so much beauty out there.

I run every day or every second day around Central Park. It clears my mind. I go with a good friend of mine, Jim Marion. He’s a doctor. We run and chat about theology or the latest hangover, it doesn’t really matter. And I bounce ideas off him. He’s a great listener. I also cycle with my son around the park. No naps! No! A nap would kill me. I like to be tired at the end of the day. Then a proper sleep comes.

I am the world’s worst when it comes to the e-mail and the Internet. Especially when the writing is going badly, which (in the middle of a novel in particular) is most of the time. I tend to check Soccernet.com for my favourite team, Stoke City. What a waste of time that is. I watch the most obscure football matches. It’s a disease. The other vices are the ordinary ones ... but I live out most of my demons in fiction. I like to become "other" in fiction. Then I can be fairly normal in "real" life.