Nothing Is True and Everything Is Possible: Moving and Shaking in 21st Century Russia 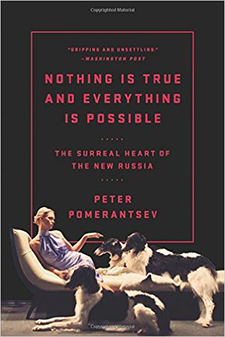 Note: Since this article originally ran, Peter Pomerantsev was awarded The Royal Literature Society's Ondaatje Prize given for "a distinguished work of fiction, non-fiction or poetry, evoking the spirit of a place." Nothing Is True and Everything Is Possible was also a selection for Amazon's Best Books of the Month for November 2014.

When the Soviet Union collapsed in the early 90s, the West rejoiced with the relief that came with the end of the Cold War and the possibility of an era of peace and cooperation. At the same time, its corporations and conglomerates trained a beady eye toward its newly opened markets, and a seemingly virgin economic landscape soon became home to icons such as Coke and McDonalds and Levi’s. But the door was open wide, and tagging along with big business were some seedier characters: organized crime, a youth-and-glamour-obsessed oligarchy, and an entertainment complex hungry for the new concepts of its Western counterparts. That’s where Peter Pomerantsev comes in. Born in Kiev but raised in Great Britain, Pomerantsev returned to Russia as a consultant to its burgeoning film and television—especially “reality” television—industries. What he found was a capitalist’s paradise: an unfettered cash and service economy with no apparent limits on either--one where Nothing Is True and Everything Is Possible, if you can pay for it. At the top of it all sits Vlad Putin, infusing the old TASS tactics with Hollywood flair to create a vision of a bare-chested (bear-chested?) virility and power, of both self and state. Pomerantsev finds himself gazing deeper into this looking-glass world—willingly and otherwise—and he finds it impossible to look away, as will his readers. This is not your father’s Russia, and yet it kind of is.

All that sounds hyberbolic, right? But it's all there. And to demonstrate, Pomerantsev has provided short biographies of some of the book's most interesting players. 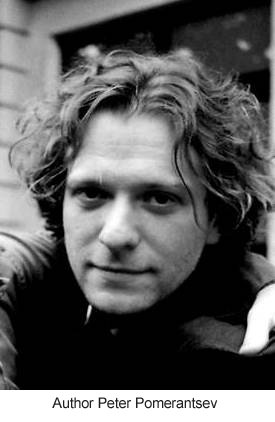 Nothing is True and Everything is Possible: A Cast of Characters

Vladislav Surkov: The Kremlin "Vizier"
"Egor could see to the heights of creation...."

The hidden author of the Putin system, Surkov trained as a theater director, made his name as a PR guru before going on to become one of Putin's right hand men, running Russian politics like a mix of Don Draper and Rasputin. In his spare time he pens satirical, self-referential novels about cynical political operators who have sold their souls, writes rock lyrics and essays on modern art. When asked for his reaction to being sanctioned by US and EU for playing a key role in the annexation of Crimea Surkov answered: "I see the decision by the administration in Washington as an acknowledgment of my service to Russia. It’s a big honor for me. I don't have accounts abroad. The only things that interest me in the US are Tupac Shakur, Allen Ginsberg and Jackson Pollock. I don’t need a visa to access their work. I lose nothing."

Oliona: A Moscow Holly Golightly
"It's all true, you can really have the life; it's not just in the movies!"

Oliona has come to Moscow from a bankrupt mafia-run mining town to make it as a gold-digger in the city's decadent clubs. She's quite open, even proud of her bag of tricks, and attends a gold-digger school where she's taught how to seduce and keep an oligarch: never wear jewelry on a first date, she learns, dress down- so that he wants to buy you presents. But she's hitting her mid-twenties and that might spell the end of her career. She worries her sugar daddy is going off her, while her generation dream of Putin as the ultimate sugar daddy of them all.

Vitaly: Gangster Turned Film Director
"Usually you’d be one of my victims. But in this case we'll be partners."

Vitaly used to be a gangster in Siberia. Then he took all his all-gotten gains and ploughed them into the movie business. But they're no ordinary movies. He makes films about his own life, with himself in the main role, and his gangster buddies playing themselves. He spent years behind bars watching gangster movies and thought they were all fake: only a real gangster can make a real gangster movie.

Nothing Is True and Everything Is Possible: The Surreal Heart of the New Russia

Jambik Hatohov is 7 years old and weighs over a hundred kilograms (220 pounds), making him the biggest boy in the world. He lives in the North Caucascus, in a part of the country where the choice growing up is between being a wrestler or a Jihadi. His single mum thinks she can use Jambik's weight as a way out of the squalor, and hopes he can become a TV star. Meanwhile more and more "black widows," the name given to suicide bombers form the North Caucascus, make their way to Moscow to blow themselves up in the name of Allah.

Yana Yakovelva: Imprisoned Business Woman
"You think prison is something bad that happens to other people. And then you wake up and my God you’re a convict."

Yana was a poster girl for the new, capitalist Russia, running her own petro-chemicals business and living what seemed like a perfectly successful, Western-style life. But in Putin's Russia, normality is only ever an illusion. When some high-level bureaucrats want a piece of her company they throw her in prison on trumped up charges--and Yana is plunged into another Russia of convicts and corrupt courts. As she fights to get out, she finds her own case leads right to the top of the Kremlin.

Alexander Mozhaev: The Guardian Spirit of Old Moscow
"The drama of human lives is written in the buildings. We will be gone; only places remain."

The city is destroyed to make way for neo-Stalinist skyscrapers, and Mozhaev tries to save the last vestiges of the old town. This is more than about just buildings, in a system which is misusing history in the name of tyranny the fight for the city becomes a fight for a different sort of Russia. Mozhaev is the last romantic in a city of corruption.

Ruslana Korshunova: Supermodel
"I'm so lost, will I ever find myself?"

A Russian supermodel, star of a Nina Ricci ad, who killed herself by jumping from a NY skyscraper. She seemed perfectly happy, wasn't into drugs, was preparing to go to university. What lead to her death? Was it a tragic love story? Could it have been murder? And is her death connected to that of another top model who also died by jumping from a high-rise, this time in Kiev?

The Night Wolves
"We only have a few years to rescue the soul of holy Russia."

As Moscow plunges into a messianic fervor sects bubble to the surface. None is more striking than the Night Wolves, a Russian Hells Angels biker gang who have found God and see themselves on a mission to save the Russian soul from the decadent, Satanic West. Their faith combines Orthodox Christianity with a worship of Stalin and heavy metal. Surkov, as ever, is in the background, making the Night Wolves national stars as the Kremlin toys with a dangerous, and surreal, religious nationalist ideology.

Boris Berezovsky and Roman Abramovich
"This is a very Russian story, with lots of killers, where the president himself is almost a killer."

Two Russian oligarchs--now based in London--who are fighting the largest private litigation in history. Berezovsky, the older mentor known as the "Godfather of the Kremlin," accuses his protégé, Abramovich, known as the "Stealth Oligarch," of "acting like a gangster" and extorting a five-billion-dollar company from him. The trial opens up the insides of the Putin system, showing how it is increasingly growing to influence the West as the Russian super-rich descend onto London, Monaco and New York.

Vladik Mamyshev Monroe
"I want to try on every persona the world has ever known."

A performance artist, the inevitable guest at parties attended by the inevitable tycoons and supermodels, arriving dressed as Gorbachev, a fakir, Tutankhamen, the Russian President. In a world where gangsters become artists, gold diggers quote Pushkin and Hells Angels hallucinate themselves as saints and where "performance" is the buzz-word Vladik is a mascot and prankster philosopher. But as the new Russia tumbles from decadence to madness, from glamour to dictatorship, he finds himself appalled at the very cult of performance he celebrates: "Putin will eat up our country," he writes. "One day we will reach into the cupboard and reach for our clothes and they will turn to dust in our hands because they have been eaten by maggots."

Nothing Is True and Everything Is Possible: The Surreal Heart of the New Russia
Peter Pomerantsev
Print Book Kindle Book