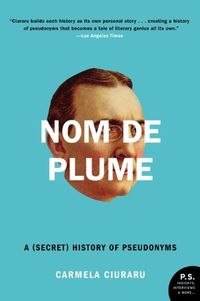 In the age of celebrity autobiography and memoirs penned by twentysomethings, ghostwriting has become de rigueur in a dishy way (though I'd guess most practitioners don't look like Ewan McGregor). But what about the other side of the coin: Why would any lucky soul capable of writing a book with her own two hands hide behind a fake name?

Well, for lots of reasons, reports Carmela Ciuraru in Nom de Plume: A (Secret) History of Pseudonyms. Out in paperback next week, Ciuraru's light but intriguing history takes a fascinating look behind the scenes at some of fiction's most celebrated fake names, from O. Henry to Isak Dinesen to Victoria Lucas. (Victoria who? That's Sylvia Plath to you. The brilliant, depressed young woman originally published The Bell Jar under a pseudonym to mask her dark novel's autobiographical elements.)

Sexism was a popular motivation for 19th-century greats to take on new identities, including the Brontë sisters, Aurore Dupin (George Sand), and Marian Evans (George Eliot). Unable to break into Europe's male-dominated literary circles in their petticoats, these talented ladies assumed men's names to capture the attention of publishers. Once their extraordinary gifts were revealed, their identities became public knowledge—but to a woman, they continued to use male pseudonyms throughout their careers. Ciuraru notes that this allowed a level of freedom they may not have enjoyed otherwise: Sand, "magnanimous and brave," also cross-dressed, rolled her own cigars, and had lovers of both genders; Eliot, "a politically progressive atheist" and "formidable intellectual," lived openly with a married man for years.

The Brontës, for their part, were painfully shy, and privacy also played a key role in the nom de pluming of another mainstay of the modern canon. Charles Dodgson, a clergyman with a penchant for young girls, refused all letters addressed to Lewis Carroll after Alice's Adventures in Wonderland made him famous. Then, of course, we have the class divide: George Orwell's blueblood lineage disdained its native son's preferred subjects—hookers, beggars, and "common" working men—so the sickly Eric Blair took to the streets and lived among them. His metamorphosis into Orwell accompanied the publication of Down and Out in Paris and London, a semiautobiographical chronicle of the experience.

As for Samuel Clemens, owner of the most famous pen name in American letters, he claimed nautical origins for his nom de plume. But he also got a big kick out of tricking his legions of fans, among them Darwin, Faulkner, and Edison, the latter of whom proclaimed: "An American loves his family. If he has any love left for some other person, he generally selects Mark Twain."

I really can't write a better closing line than that. Maybe my ghostwriter has a few ideas.