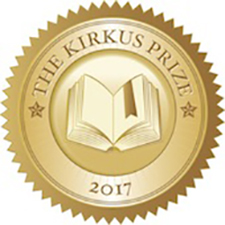 Yesterday Kirkus Reviews announced the finalists for the Kirkus Prizes in the categories of Fiction, Nonfiction, and Young Readers’ Literature. Initially given in 2014, the awards "celebrate the 81 years of discerning, thoughtful criticism Kirkus Reviews has contributed to both the publishing industry and readers at large." Winners in the three categories will each get $50,000 and will be announced at a ceremony in Austin, Texas on November 2, 2017. Books receiving the Kirkus Star and published between Sept. 1, 2016 and Aug. 31, 2017 were eligible.

What It Means When a Man Falls from the Sky: Stories by Lesley Nneka Arimah (Riverhead)

The Ninth Hour by Alice McDermott (Farrar, Straus and Giroux)

Her Body and Other Parties: Stories by Carmen Maria Machado (Graywolf)

The Gulf: The Making of an American Sea by Jack E. Davis (Liveright/Norton)

The Seeds of Life: From Aristotle to da Vinci, from Sharks' Teeth to Frogs' Pants, the Long and Strange Quest to Discover Where Babies Come from by Edward Dolnick (Basic)

Tell Me How It Ends: An Essay in 40 Questions by Valeria Luiselli (Coffee House)

The Cooking Gene: A Journey Through African-American Culinary History in the Old South by Michael Twitty (Amistad/HarperCollins)

Walk With Me by Jairo Buitrago, illustrated by Rafael Yockteng and translated by Elisa Amado (Groundwood)

Me Tall, You Small by Lilli L’Arronge and translated by Madeleine Stratford (Owlkids)

Bronze and Sunflower by Cao Wenxuan, translated by Helen Wang, and illustrated by Meilo So (Candlewick)

It All Comes Down to This by Karen English (Clarion)

The Hate U Give by Angie Thomas (Balzer + Bray)