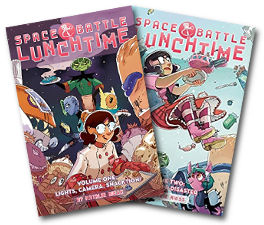 Someone has written an intergalactic cooking competition graphic novel for kids? Sign me up for that!

Author and artist Natalie Riess releases her second volume of Space Battle Lunchtime on July 4, serving up a brightly colored palette and highly kinetic story that will mesmerize kids looking for something a little different.

Amazon Book Review: What is Space Battle Lunchtime about, and what age group is it aimed at?

Natalie Riess: Space Battle Lunchtime is about an Earth baker who gets abducted to compete in an intergalactic space cooking competition. I basically tell people that it’s Chopped in space. It’s very cute. The first arc [in volume one] is mostly cooking-based, and the second arc [in volume two] goes and does some goofy action-adventure stuff, which also involves cooking in a slightly different way.

[It’s aimed at] middle grade, but it’s all ages. Anyone can find something nice in it.

What came together to form this idea? I’m sure you have a million ideas, so why did you go forward with this one?

When I was in college, my best friend and roommate was really into cooking manga for a little bit, but she also really liked super-gross alien stuff. So I said, “OK, I’m going to make a super-cute cooking space alien [for you].” She said, “Ha ha, that’s funny.” And then I forgot about it. But then I went back to it and thought, “This is funny and cute,” and I started drawing some character designs for it. I also needed a new story to pitch, and the notes were right there, so I started it.

Did writing Space Battle Lunchtime inspire you to bake or cook more?

I did try some new stuff, with varying degrees of success. There are some things that I wanted to make so that I had a better idea of how stuff looks [so I could] make it look good when I draw it. Everyone loves food comics when the food looks good, because everyone likes to eat.

Yes, that’s a completely different story. It’s brightly colored and about a girl, but other than that, Snarlbear is a dark fantasy adventure about catching monsters. It’s still cute and I love it, but Space Battle Lunchtime is a lot more centered around being a fun, enjoyable story.

What have you found the difference to be between creating a web comic and creating a printed comic?

Well, printed comics get you paid, which is the mean, mercenary answer. [Laughs.] But print is interesting for pacing reasons. The way Oni approached me to do the book was that it would be an eight-issue miniseries that could then get turned into a graphic novel. So I have to write this story within a limited number of 22-page chunks. I think that actually helped me make concise story decisions a lot better. And also, seeing your work in print is so cool. I get to see the book and hold it and think, “Yeah, I made that.” I’ve been to a store and seen it on a shelf, and I think, “I made that! I made that book.” Maybe the novelty will wear off eventually, but it still hasn’t.

How have kids reacted to Space Battle Lunchtime?

I did a talk and a signing at the local public library, and a kid gave me a drawing of a cookie person. I’ve also heard from a lot of people who work in comic stores that a lot of time it is parents who will pick it up and be like, “Hey, I want to read a cooking show comic. I’m buying this for my kid but also maybe I’m interested.”

Kids comics have been growing quite a bit in the last couple years. Boy superhero stuff used to be all you had. It’s now a lot more nuanced.

There’s more variety. I think that’s really good for the reading audience, especially one that might not have traditionally been served by comics.

What was your path to being a comics creator?

I went to school for illustration, and I was going to try to be a storyboard artist for animation. But comics have just kept working out for me.

Natalie, if your days were twice as long, but you didn’t need any more sleep, what else would you do?

Project-wise? I would probably try to animate. Also, I would spend more time outside, especially in the woods. It doesn’t come up in Space Battle Lunchtime, but I’m very passionate about nature. That sounds really dumb when I say it out loud…. But I want to do more volunteering and more projects involved with conservation and ecology. I have a comic that I’m working on right now that’s fantasy-biology themed. 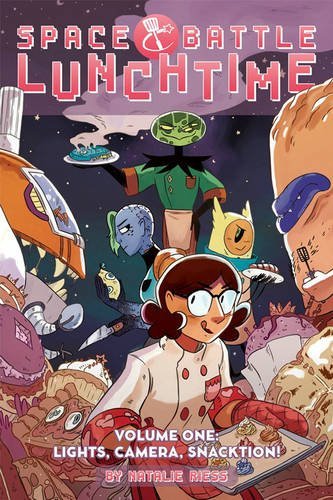 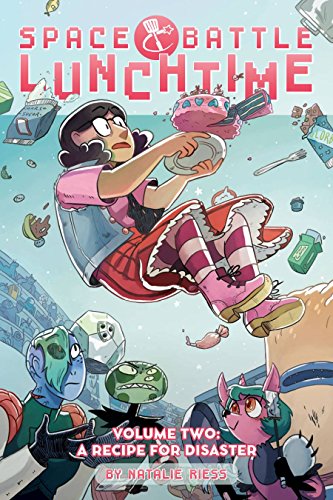