A look inside "Chefs' Fridges" 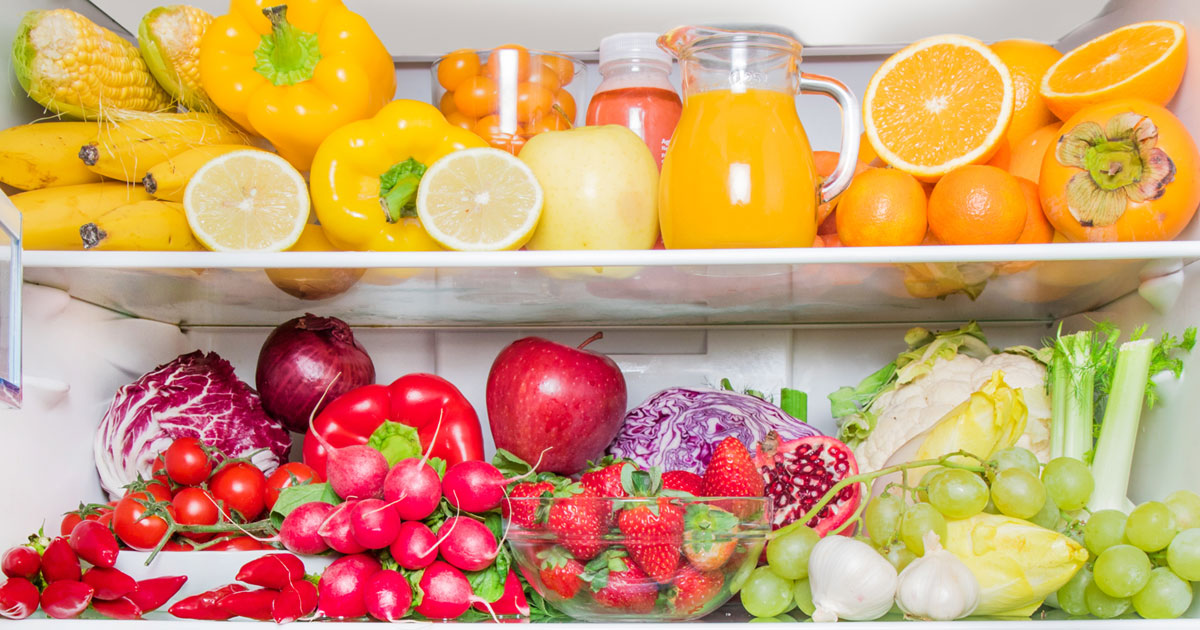 What's in your fridge right now? I don't know about you, but I always find it fascinating to peek into someone else's refrigerator and see what's there. Nothing but expired condiments? Enough food to feed an army? Too much Tupperware? It's really personal and no one preps their fridge before company comes over, so what you see is the real deal.

Next week the James Beard award winners will be announced, so until then how about we take a peek inside one famous chef's fridge via the new book Chefs' Fridges: More Than 35 World-Renowned Cooks Reveal What They Eat at Home?  One of our best cookbooks of the month, this is a really fun book to read and also includes great recipes.

Each of the 35 chefs is profiled not just by the contents of their fridge—complete with an item diagram—but with a few details about them, some Q&As, and a recipe from each. You kind of need to see it to understand how it works, so below is a sample (formatting adjusted for this post) from Chefs' Fridges on famed, Nobel Peace Prize nominated chef, José Andrés. 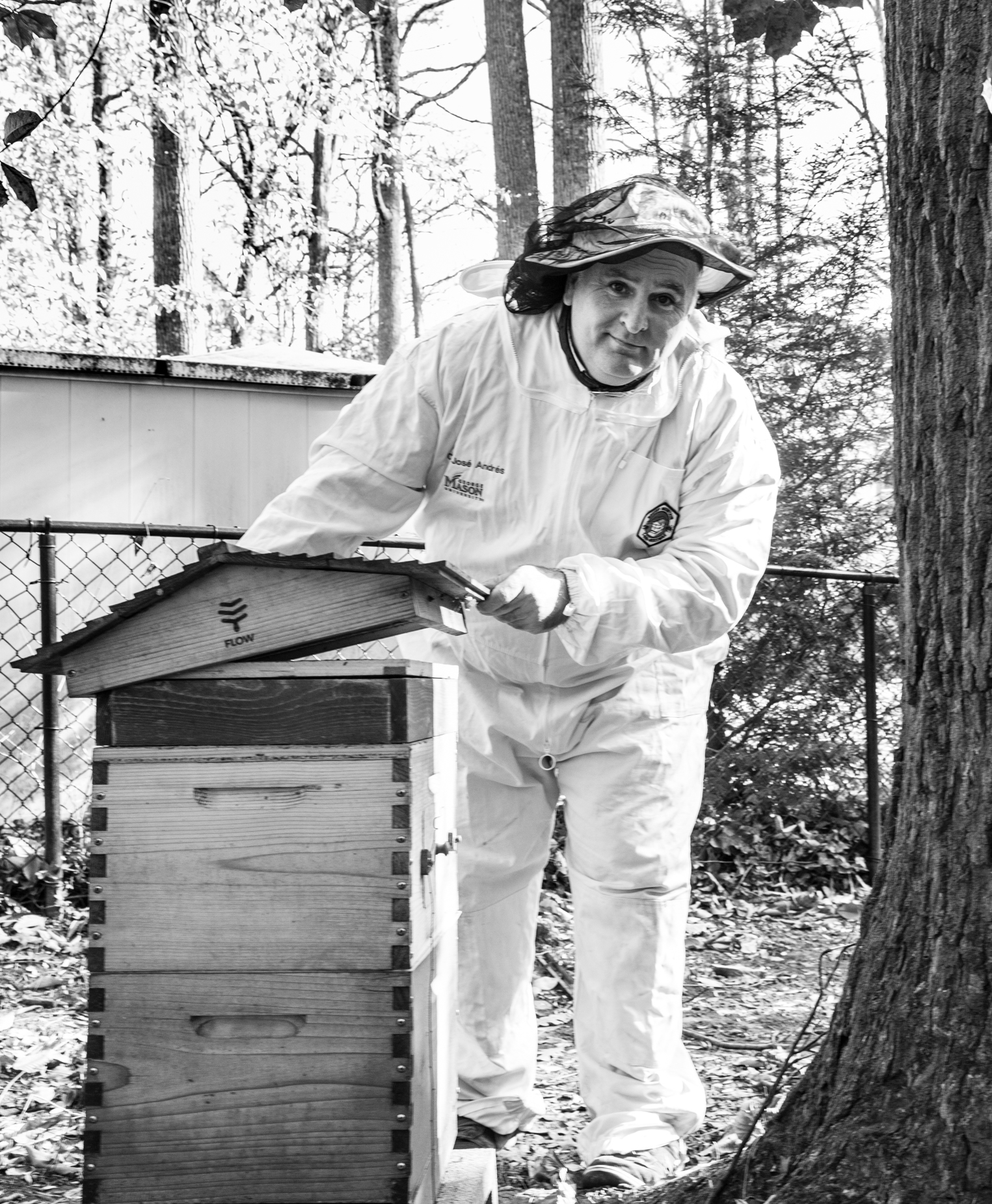 One of José Andrés’s favorite impromptu lunches on busy days is jarred chickpeas, which he eats while standing, plate in hand and back against the fridge. Chickpeas and other simple dishes remind him of his childhood in Asturias, on the coast of northern Spain. Money was often tight for his parents, who were both nurses. At the end of the month, in between paychecks, his mother would make the most of what was left in the pantry: “If we had a little ham and cheese left over, she would bind them with béchamel and make croquetas,” says Andrés.

“When my brothers and I were young, we would sneak into the fridge in the middle of the night and eat the croqueta mix with our fingers, and then try to smooth out the top to cover up the evidence. When my mother would see the mix with little finger marks—craggy like the surface of the moon—she would know we had been sneaking tastes!” he recalls.

That taste for croquetas may be why he’s been interested in food since he was little. “I would watch my parents cooking, and was inspired to begin myself at the very young age of seven years old,” he says. At fifteen, he went to culinary school in Barcelona. One of his first jobs was at a convention center there, where he met Josep Puig, whom Andrés calls “one of the best chefs in Spain. The food was not fancy but it was very good, and I had a lot of responsibility—I had to learn how to execute each of the dishes, classics such as Spanish tortillas, perfectly every time.”

From there Andrés went to work for Ferran Adrià, who’d just opened El Bulli right outside Barcelona. Adrià became a mentor and, later, a great friend, but he also fired the twenty-one-year-old budding chef. A week later, Andrés landed in New York City with fifty dollars in his pocket. After a couple of gigs in New York, he went to Washington, D.C., and shortly thereafter turned Washingtonians on to tapas when he became the chef at Jaleo. From there, things moved quickly—Andrés opened restaurants throughout the country, wrote a cookbook, began teaching classes at Georgetown and Harvard, and, because of his humanitarian work serving more than 3.6 million meals in Puerto Rico after Hurricane Maria, became a Nobel Peace Prize nominee, among his many other awards and accolades. Not bad for someone who didn’t graduate from high school or even culinary school.

Like his personality, Andrés’s kitchen is expansive—it encompasses his indoor greenhouse, located downstairs from the kitchen, and a solar cooker next to the barbecue outside. His Sub-Zero is stacked with containers of leftovers, spreadable cheese, and homemade smoothies for his wife and three kids as well as experiments for his group of restaurants, ThinkFoodGroup. It’s also replete with chef indulgences—specialty Spanish olives, small tins of caviar and bottarga (cured fish roe from Italy), as well as vegetables from his garden.

RESTAURANT THAT MADE HIS NAME: Jaleo, Washington, D.C.

BEST KNOWN FOR: Minibar by José Andrés and nineteen other restaurants; World Central Kitchen, the NGO he started after the 2010 earthquake in Haiti; numerous James Beard Awards, including 2018 Humanitarian of the Year 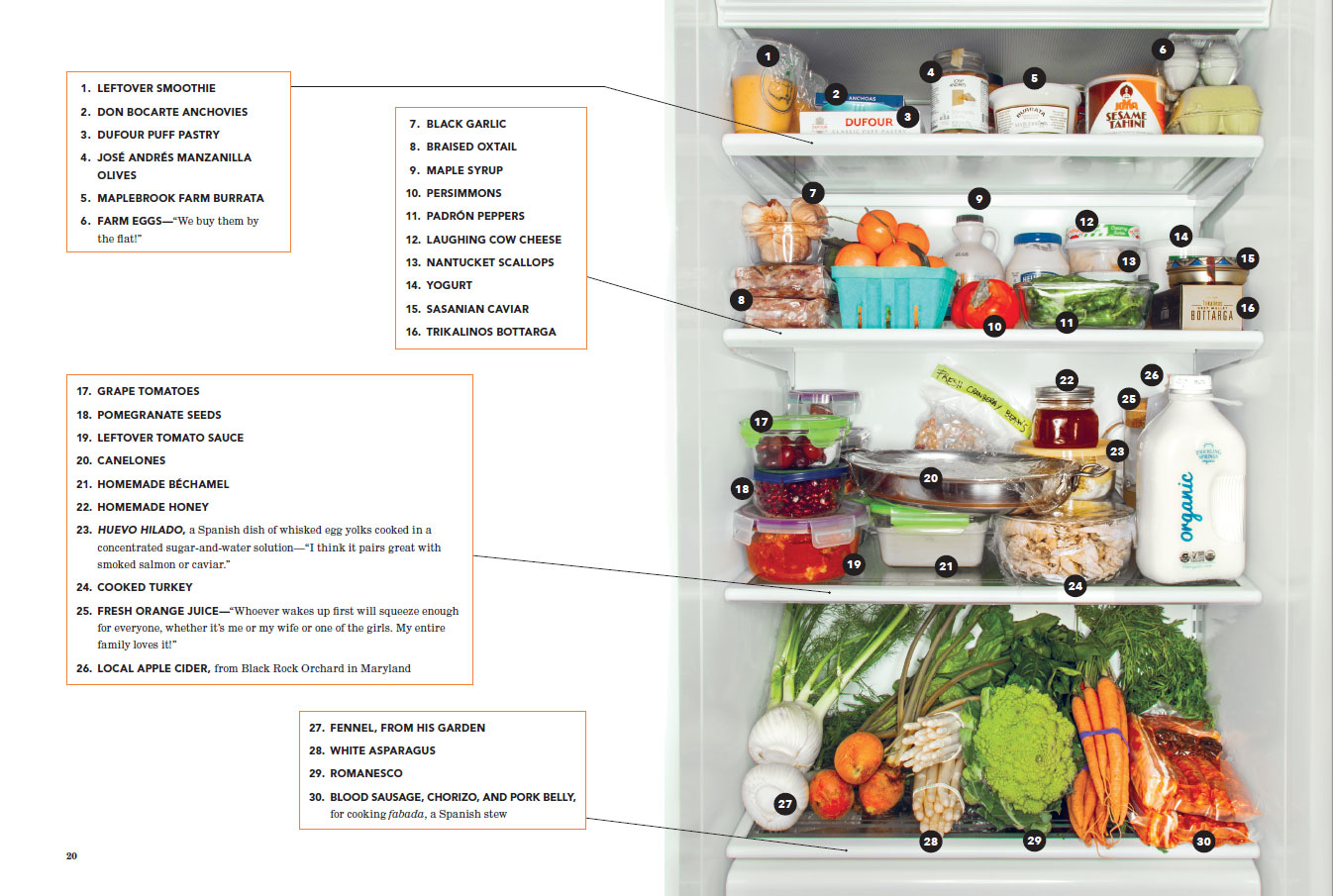 How many refrigerators do you have?
We actually have two—one in the kitchen and one in my garage. The kitchen fridge is for our daily use—eggs, cheese, vegetables, you know. The Hoshizaki in the garage is for everything else. My team and I do a lot of R&D at my house, so we fill up the second fridge when we are working. It also makes a great backup when we are getting ready for hosting.

What do you always have in the  refrigerator?
Cheese—I love cheese and we always have local cheeses from Maryland, Pennsylvania, and Virginia, as well as from Spain. We will also have some ingredients like miso and kimchi to amplify dishes that I am cooking—a little bit of miso does some amazing things to stews, soups, sauces. And eggs . . . almost every meal I make has eggs in it. And we will always, always have leftovers in the fridge, no matter what.

Who does the food shopping in your house?
We all like to go to the local farmers markets. I will get produce, cheese, eggs, and meat there. Nothing tells you more about how vibrant your region is than going to the farmers market.

What are some of the local products you use?
The apples are amazing; Maryland has some very good cheese makers, too. We also have a Farmshelf—it’s an indoor greenhouse—and we grow our own lettuces and herbs in there. In addition, we have a garden in our yard where we grow potatoes from all over the world, tomatoes, beans, herbs, lettuces, and carrots. And we have our own bees too, so we gather our own honey.

What is in your freezer?
Some people might find it crazy, but I think peas are the best frozen vegetable imaginable! Most frozen vegetables can’t hold up to the cold, but peas are special—as are fresh shelling beans, like cranberry beans. It is great to have them frozen when they are not in season. I also always keep good puff pastry in the freezer; you never know when you might need it. And my daughters, they love ice cream, so we have many different kinds.

Tell us about a “niche” product, something you just discovered.
I just learned about this Jordanian dried yogurt called jameed. I brought some back from a trip to Jordan and keep it in the freezer. Jameed is used in mansaf, the national dish of Jordan. I believe that mansaf will be one of the next major dishes to come to the United States— it really is incredible and I love to experiment with it, to see what else we can do with it.

Describe your cooking style.
I am always thinking of a different way to do things. Look at a tomato, an onion, and a bundle of herbs— and ask yourself, how can I extract the essence of this? How can I make it taste like the most perfect version of itself? It’s important to look at history, seasonality, technique, and flavor.

What is your favorite food when coming home from a long day at work?
I like to take some zucchini and cook them in water— cook them until they are al dente, then you add a little bit of miso and sesame oil to really bring out the amazing flavor of the vegetables, top with some furikake [a Japanese seasoning], and then eat it all with chopsticks. You eat the savory, tender zucchini first, and then the broth is amazing—it makes the best soup.

What do you cook for your family? I make the kinds of foods that I grew up eating, like arroz a la cubana. Tichi cooks a lot as well—I really love her spinach and garbanzo stew, it’s my comfort food. The recipe is from her family in southern Spain; she learned it from her mother, who learned it from her mother, and so on for many generations. It actually was one of the first dishes that Tichi made for me when we were first married! 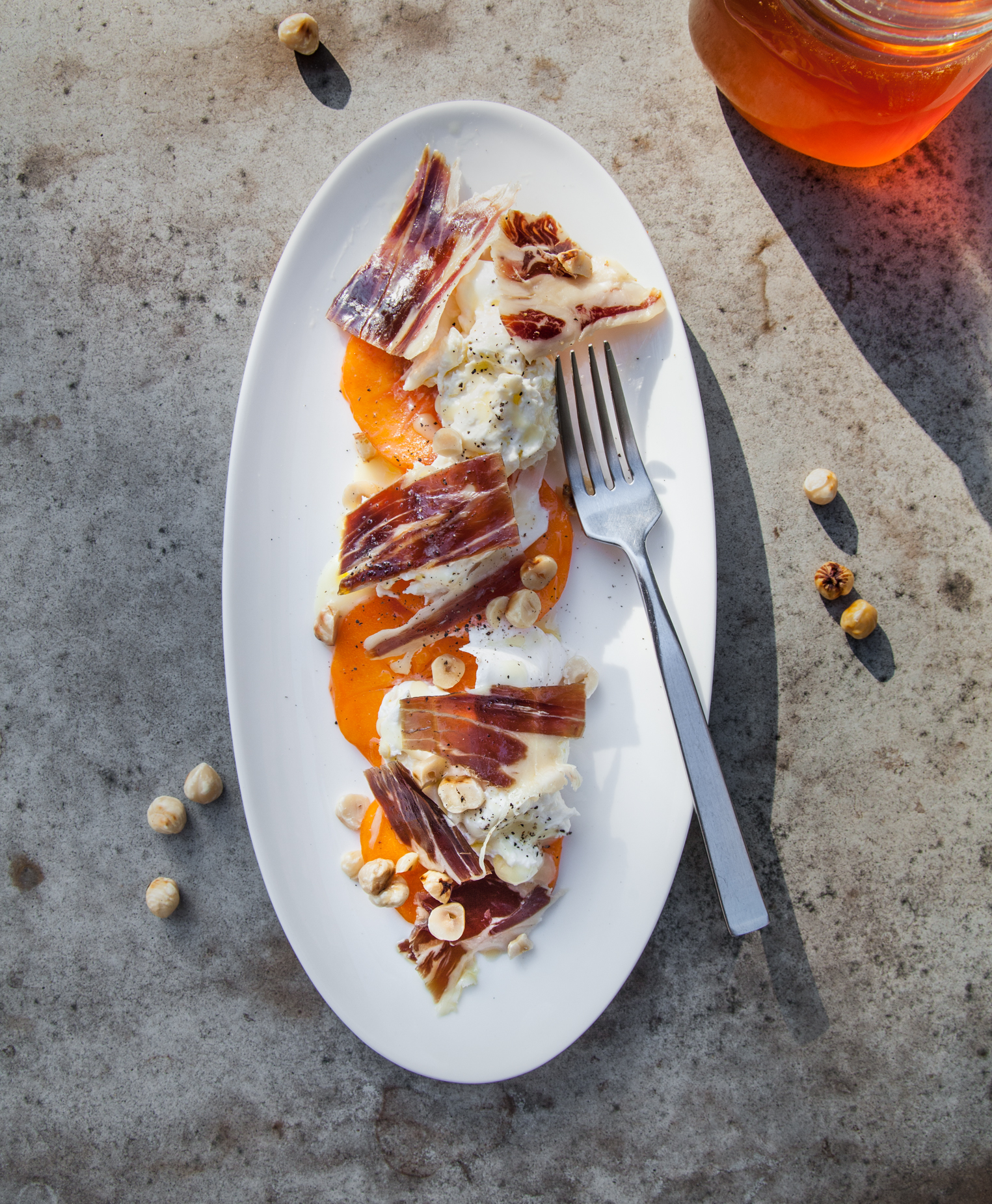 Burrata with Persimmons, Jamón, and Honey
For this recipe I use the honey that I harvest from the bees I raise at home in my backyard. I collect it myself. I believe it’s been a remedy for my daughter’s allergies. Greek honey is wonderful as well.

Peel the persimmons and slice into ¼-inch-thick rounds. Arrange on a large serving plate or four individual plates.

Lightly break apart the burrata with a fork and place it on top of the persimmon slices, then top with the jamón serrano.

Drizzle the lemon dressing over the salad and garnish with hazelnuts, Maldon salt, and freshly ground pepper.

Whisk together the lemon juice and honey. Continue whisking as you slowly drizzle in both oils—the neutral one and the olive oil. Add the white pepper and kosher salt to taste. (Store extra dressing in the fridge for up to a week.)

What does chef José Andrés keep in his refrigerator? In this chapter sample you'll see that and more, including Andrés' recipe for Burrata with Persimmons, Jamón, and Honey. 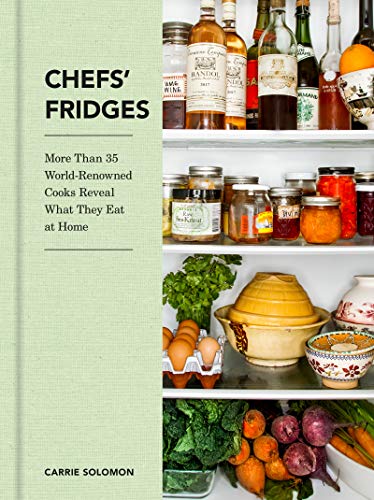 If you loved Dean...
Read