It's getting pretty Squatchy 'round these parts 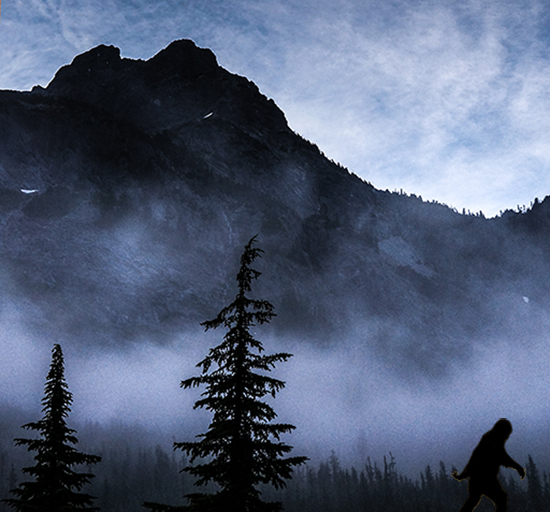 It’s not often that I have the opportunity to push a book about Bigfoot onto our best of the month list, but when John Zada’s In the Valleys of the Noble Beyond: In Search of the Sasquatch, I sensed a once-in-a-lifetime opportunity. A few weeks back, Zada called our offices to discuss the book, Bigfoot culture, and his own take on the elusive phenomenon. (And yes: In the Valleys of the Noble Beyond was a deserving Amazon pick for July, 2019.)

To many (or most), Bigfoot is a fantastical if not downright silly subject, one that has attracted mostly silly contributions. If you're a thoughtful person with a fact-based career, maybe a scientist or journalist, pursuing the notorious Skunk Ape can hinder your professional ambitions, or scuttle them entirely. John Zada might be the exception. Like many children of the 1970s who grew up watching Leonard Nimoy In Search Of unexplained phenomena, The Six-Million Dollar Man battling an extraterrestrial robo-Squatch, and (for the real deep-divers) the low-rent cinéma vérité of The Legend of Boggy Creek, he developed a thing for the legendary wild man. But while he grew up to become a globe-traveling writer and photographer whose work has appeared in The Globe & Mail and the Los Angeles Review of Books, that thing never really went away. Following multiple stints overseas, Zada returned to his hometown of Toronto to pursue his “deep passion”: Travel writing. He set out to explore the Great Bear Rainforest, a remote and utterly wild expanse on British Columbia's northwest coast, ostensibly on assignment for an adventure story, but “also knowing that there is Sasquatch lore attached to it.”

The communities at the coastal edge of the Great Bear are strewn across a landscape of remote inlets and densely forested valleys, and the most practical, possibly only way to reach places like Bella Bella, Wuikinuxv (Wee-kin-no) and Koeye (Kvai) is through a charter network of small planes and ferries. Expedia won’t help you here. Their inhabitants (the human ones, anyway) are a mix of First Nations peoples and stubborn individualists, many holdovers from abandoned oil industry outposts. There he also met scientists, hunters (of game and cryptids), and conservationists, including Ian McAllister, who helped protect the region through his stunning nature photography and efforts to re-brand the forest as the Great Bear.

When he arrived, Zada was "was floored by the amount of Sasquatch stories and activity that I didn't necessarily seek out. I started to chase down all of these Sasquatch leads and spent less time on the travel aspect of the Great Bear. I realized that I had so much material—not just Sasquatch-related, but also history, science, nature, and characters. Way more material than I needed for one article. I could write 10 articles. Why don’t I just write a book?”

Again, that’s not the conclusion I would expect many successful, reputable journalists to make. But In the Valleys of the Noble Beyond rises above a mostly sensationalistic genre (one that's often self-published, not that there’s anything wrong with that). Zada walks a fine line between skepticism and credulity while taking those sometimes fantastical accounts seriously. Zada's entry is a beautifully rendered account of a mist-shrouded world suspended between myth and modernity: its people, culture, and ecology, and, for receptive readers, its most mysterious denizen. Readers expecting the hooting and howling histrionics of Finding Bigfoot may be disappointed, though that show certainly has its charms, if not any actual Bigfoots. Like Robert Michael Pyles's Where Bigfoot Walks, In the Valleys of the Noble Beyond leans into respectability with its emphasis on natural history, rationality, and self-reflection.

But Where Bigfoot Walks didn’t have any actual Bigfoots, either. Do any make an appearance in the pages of In the Valleys of the Noble Beyond? That might depend on how inclined you are to accept that a Big Unknown could be out there, and that it's wily enough to avoid discovery. If you’ve ever spent a night in the wilderness — alone or with a friend, with nothing but a mesh-and-nylon wall between you and the deep dark — there are two things that you know for certain. One, it’s easy work our brains to trick us into thinking that almost anything can be walking in the woods, snapping branches just beyond the dome of a headlamp. And two, anything really could be.

In the Valleys of the Noble Beyond: In Search of the Sasquatch

So it’s easy to dismiss accounts from lone witnesses addled by darkness and fear, but how about an encounter with a dozen witnesses? Take the story of Mary Brown. In this particularly hairy episode, the Bella Bella resident, along with two other adults, led a group of nine teenaged girls on a planned weekend camping trip on the remote Roscoe Inlet. As dusk approached, some of the girls dug clams on the beach as others loaded into a small boat with Brown to retrieve crab traps. As she recounts:

“’I looked up and couldn’t believe what I saw. There was a Thla’thla [one of many First Nations terms for the Sasquatch] right at the tip of the rock! It was crouched down with its arms hanging around its knees, which were up past its shoulders. It was brown in color and just huge.… It stood up and looked over its shoulder at us as it walked off. After three or four steps it was gone, into the forest.’”

Having grown up on stories of a “wild woman of the woods” that kidnaps children — an classic from the Universal Parenting Toolkit — the boaters raced toward to shore in order to warn to girls the beach, then everyone retreated to the safety of their cabin. By nightfall, it had returned, crawling under the building and knocking on the floor, with no apparent intent to leave. “’And we were overcome by this incredible stench. You know how a dirty, wet dog smells, right? But this was like ten times stronger.’”

There’s more to the story, but you’ll have to read the book. Brown insists it wasn’t a bear.

But not everyone in the First Nations communities believes, and the views are diverse among those who do. Some behold a gentle sentinel, while others fear it as a bogeyman (or as others say, boogerman). There are tall ones, short ones, hairless ones, and paranormal ones that travel between physical and spiritual planes. He found far fewer stories in towns with higher populations of non-native Canadians. As for Zada himself, he approached his task with the open mind of a journalist, but found his feelings evolving.

“I went into the investigation with more of an either/or mentality. I wanted to come out of the whole process having a decision, once and for all, for myself. But as I listened to the stories — some of them being really, really compelling — it caused me to put aside an excessive amount of skepticism. Because if you look at the stories from just a purely clinical, scientific, investigative, cut-and-dry point of view, you miss the beauty of the stories, in and of themselves.

“I slowly opened myself up, and it's not really that hard when you speak to people who live in backcountry environments. They live in close harmony with the creatures there, and so you're speaking to authorities about life in their own backyard.

“When you spend time in remote old-growth forest, you connect with a sense of transcendence. Perhaps some, if not all, Sasquatch encounters [are] the mind’s way of trying to grapple with great power that is emanated by untrammeled nature. In that sense, I feel like I made some kind of a connection with the spirit of the creature. Perhaps it’s a mystery which deserves to remain a mystery.”

And in the Great Bear, whatever walks there, walks alone.

In the Valleys of the Noble Beyond: In Search of the Sasquatch
John Zada
Print Book Kindle Book