Trend Stetting 14: Right to the Point 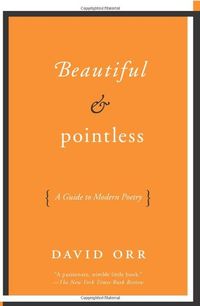 I had three reasons for opting to review David Orr's recent book that have nothing to do with the words inside it. First, the title: Beautiful & Pointless: A Guide to Modern Poetry. How freaking fantastic is that? I'd read almost anything called Beautiful & Pointless—a YA novel with a tragic ending, a hipster design magazine, a religious tract.

Reason number two, also title related: Ampersands are my favorite punctuation mark. Yes, I have a favorite (and several runners-up). Think what you will—I feel no shame about this. Several years ago, a coworker made me a fuzzy red ampersand ornament during the holidays; another drew a picture of me sitting on a giant ampersand for a greeting card. Proclaim your idiosyncrasies from the rooftops, friends. You might get some killer homemade gifts out of it.

Third reason: The cover is a delicious shade of mandarin orange. Visit my kitchen sometime, and you'll understand. I realized I had a problem when I came home from a shopping trip one afternoon with a giant orange spatula.

And now, having read the book from clever title to orange back cover, I need to add a fourth reason: Orr's disarmingly smart, funny, and engaging prose. As the author notes at the outset, he has chosen to write about "an art form that currently occupies a position in the popular consciousness somewhere between lute playing and crewel embroidery." Moreover, this art form is "enormous and perplexing, and at least half of it is interesting only to scholars and the certifiably disturbed."

It's a minor miracle, then, that Orr manages to take the unpopular, unwieldy mass of modern verse and make it not only relevant but exciting. He compares most readers' "puzzled interest" in poetry to the mindset of a traveler heading to Belgium for the first time: It makes sense to know a bit about the place before you land, but there's no need to learn fluent Flemish or commit a map of Brussels to memory. Poems, Orr posits, are far more approachable than we imagine. We just need to stop worrying so much about whether or not we're reading them correctly.

Having cast aside the confusion and dread that tend to go with unfamiliar literary territory, we're free to enjoy poetry and to understand why it matters. And with this guide, we do, thanks to Orr's empathetic way of explaining it to us. There's not a drop of condescension involved. Beautiful & Pointless fosters appreciation of an art form that rarely gets its cultural due nowadays, and the book is worth your time for that reason alone.

But hey, you could always pick it up it for the title—or because it looks so pretty. I won't say a thing.