You Knead This Novel: Robin Sloan on "Sourdough" 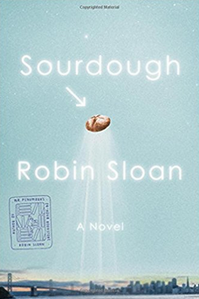 Bread is life as the saying goes, and it certainly is life-changing for software engineer-turned-baker, Lois Clary. As Robin Sloan’s latest novel opens, Lois gets a plum gig working at a tech company that specializes in robotics. The money is good, but the longer Lois stays in the role, the more she feels like the product she’s working on. Her only respite is a neighborhood takeout place she orders from each evening, run by two infinitely amiable brothers. When they are forced to flee the country due to visa issues, Lois is entrusted with something that jogs her from her dispassionate existence: a sourdough starter...Mr. Sloan recently took time out of his busy schedule to answer some of our questions about the very delightful, Sourdough.

Erin Kodicek: You worked for a certain tech company in its infancy (we won’t mention the name, but it’s very popular with a certain president). Was the character of Lois Clary inspired at all by your experience there?

Robin Sloan: To tell you the truth, not really! I worked at the-short-messaging-service-that-shall-not-be-named a whole Silicon Valley epoch ago, so in a way, Lois's job reflects what's CHANGED in the intervening years. There's the interest in hardware, robots, and AI… and there's the food! My office cafeteria was paltry compared to the vast food halls provided to tech workers today.

E.K.: Two very endearing immigrant brothers run the takeout business that Lois loves and frequents, and their origins are a bit mysterious. Why did you choose to invent a culture where those characters are concerned?

R.S.: Years ago, I lived on Clement Street in San Francisco, one of the city's most richly polyglot arteries. I loved hearing all the languages jumbled together, looking at the signs with their beautiful scripts -- and I liked the idea of a culture that was equally inscrutable to EVERYONE on that street. 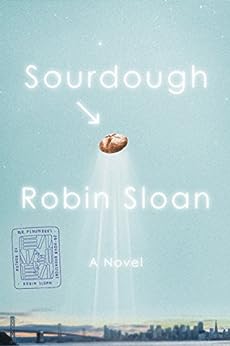 E.K.: This book has prompted at least one Amazon Books editor to purchase a sourdough starter and nurture it with the same love and care as her egg baby from high school. What about sourdough so fascinated you that you made it such a big focus of this novel?

R.S.: I mean… it's amazing stuff! Anyone who cultivates a starter soon realizes it's less ingredient, more roommate. This is a bit embarrassing to confess, but before reading the Tartine bread book, I didn't understand that sourdough bread started with this little colony of microorganisms -- this little world unto itself!

E.K.: Your affection for the Bay Area is evident in your books. What about it inspires you?

R.S.: Oh, wow. Everything! The Bay Area isn't perfect; perhaps unsurprisingly for a place that's been showered with such staggering wealth, it's now dealing with iniquities on the same scale. But even so: I think the Bay Area is one of the world's great ENGINES -- for new technologies, new ideas, new families -- new KINDS of families… I think something has started here that's going to continue for a long time. I think it might be Venetian.

E.K.: Lately we've been talking quite a bit about our favorite reads of 2017. What's the best book you read this year, whether it was published in 2017 or not?

R.S.: This is extremely random, but the best finds often are: I picked up Alan Furst's historical spy novel Dark Star at a hotel, and found myself totally enthralled. I hadn't heard of him or the book before, and now I'm hunting down more of his work.