What to Read in Litchfield Prison: Dana Reinhardt on "We Are the Goldens" 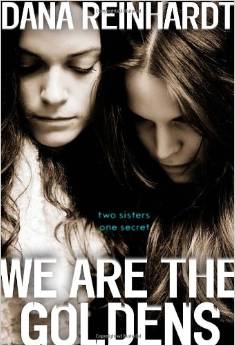 I'm a big fan of the show Orange is the New Black, and it's been interesting to see the commentary on binge-watching since the long-awaited second season released.  Many readers can relate to this experience, it's basically the same thing as when you "just-one-more-chapter" yourself into finishing a book that's sucked you in, even if it's 4 a.m. and you have to work the next day.

I recently had the unique experience of binge-reading Dana Reinhardt's book, We Are the Goldens (one of our Best Young Adult Books of June), and also binge-watching Season 2 of Orange is the New Black, where I was very pleasantly surprised to see the same book I'd just burned through, being read on the show by no less than the maven of Litchfield prison herself (that would be Red).

I wanted to find out if Reinhardt was already a fan of Orange is the New Black, and what it was like to see her book on the T.V. show everyone's talking about.  Here's what I found out about these questions and more:

Q: For a reader just learning about your book, tell me about We Are the Goldens

Dana Reinhardt: We Are The Goldens is about two sisters, Nell and Layla, who are extraordinarily close, and it’s about what happens when that sort of closeness is threatened, as it inevitably will be, by individual choices. It’s written in the form of a confessional from Nell directly to Layla as she struggles with whether to keep her sister’s secrets. It’s about kids of privilege growing up with overly trusting and distracted parents. It’s about inchoate morality. It’s about the blurry lines between love and friendship. And it’s one big (slightly twisted) love letter to the city of San Francisco.

Q: The book is shown on the new season of Orange is the New Black – were you already a fan of the show?  What did that feel like, to see your new book in that context?

Dana Reinhardt: I’m a huge fan of the show. I think it’s some of the smartest writing on television. The characters are so complex and I love the way as a viewer you get to know them before you really know them, that is, before you know who they are outside of the microcosm of the prison system and what set of circumstances led them there. Seeing Red, the grand dame of Litchfield, reading my book was an absolute thrill, particularly as that moment arrived on our screens just as the debate blew up about whether adults should be embarrassed to read YA literature. Clearly Red is not embarrassed. Nor are the many other OITNB characters shown with YA novels in their hands.

Q: What do you think makes We Are the Goldens such a good crossover adult read?

Dana Reinhardt: I see most young adult fiction, especially realistic young adult fiction simply as coming of age literature, and who doesn’t love a good coming of age story? I know I do. But this book in particular works for the adult reader because it raises some questions about parents and teachers and the environments we trust our children to that maybe aren’t simple to answer. I didn’t want to write a black and white story, and though I know some young readers will see it that way, I don’t think adult readers will.

Q: You’ve said that To Kill a Mockingbird is your favorite book – were you a teenager when you read it, and was it assigned reading?

Dana Reinhardt: I don’t remember what grade I was in when I first read To Kill a Mockingbird, maybe 9th? I know I didn’t come to it on my own, because left to my own devices I’d have just re-read a Judy Blume book for the thousandth time. But whenever it was that I was assigned that book, my sense of the world forever shifted. It moved me on every level and I remember thinking: this is a perfect book. I go back to it every 10 years or so, often with a sense of trepidation. What if it isn’t as good as I remember? What if it isn’t perfect? It is. And it is.

Q: What are you reading now and how do you decide what to read next?

Dana Reinhardt: I often read several books at once. Usually I’m listening to something on audio while I take my daily walk in Golden Gate Park with the dog. Sometimes I choose silence, if I need to work out a plot point in whatever I’m currently writing, but most often I listen to YA. I find that most YA lends itself well to audio and it’s where I do the vast majority of my YA “reading”. Right now I’m listening to Siobhan Vivian’s The List, which is wonderfully complex. As far as books that I hold in my hands, I know I’m a little late to the party, but I just recently discovered Tana French. I’m not generally a reader of mysteries or detective novels so I resisted her for a long time, but finally enough people I know and trust pushed hard enough and all I can say is… Whoa. She is a gorgeous writer. I’m also currently re-reading Joan Didion’s The Year of Magical Thinking and Blue Nights, her companion books on grief and loss and aging. They are the sorts of books to which you will want to return as, inescapably, their themes will impact your life in some way. I can’t recommend them highly enough.