A Q&A with James Polster, Author of "The Graduate Student" 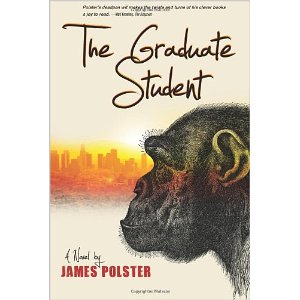 We had the opportunity to chat with James Polster, author of A Guest in the Jungle, Brown, and--most recently--The Graduate Student. Read on to find out what James thinks about everything from Hollywood, to deforestation, to sports writing:

Question: Your newest novel, The Graduate Student, centers on the bizarre world of Hollywood with a little bit of jungle mystique mixed in. How much of main character Blackwell James's experiences are influenced by your own? Any behind-the-scenes info you can share, either from Hollywood or the jungle?

James Polster: Hollywood behind the scenes--it's all in the book. Where else in the world can a bunch of daft people gather in a room to figure out how to spend millions and millions of dollars? From the studio's old, secret staircase used to sneak starlets up to the casting couch, to Stallone's jokes, to the guy who taught one of the world's most powerful computers to be a screenwriter--so much of it is true.

Blackwell is not me that much, but his jungle experiences and reactions to being back in the States and landing in Hollywood are drawn from mine.

Question: Your first novel, A Guest in the Jungle, was lauded as "Daring, witty, and intelligently written" by the San Francisco Review of Books and was one of the first books to take on deforestation in the Amazon jungle. What inspired you to take this angle? Did you witness deforestation yourself?

James Polster: I remember this exactly. I was in Surinam in the 1970's and I met a biologist over beer at lunch one day in Paramaribo. His job was to go into the jungle, climb trees, and look around. When he saw something, like a bug, he knew instantly if it was a discovery, a new species. He explained deforestation to me in one conversation. I was stunned--I realized I had seen things like slash and burn, but not known it for what it was.

Question: Your real life reads like one of your novels. In fact, WWL-TV in New Orleans called you "a real life Indiana Jones." You've explored the Amazon Rainforest, spent time in the jungles of Irian Jaya with cannibals, and both covered and played in the World Championships of Elephant polo for Sports Illustrated in Nepal. What was your craziest adventure?

James Polster: Irian Jaya was sliding along towering cliffs where the path was narrower than the sole of my boot--in pounding rain. But the craziest? I used to race a 1967 Lotus. One day I was coming down a straightaway at a pretty good clip--I believe this was the track in Phoenix-- and began to put on my brakes for a left turn. There is a concrete wall dead ahead and not all that far, so one is very motivated to turn, and I realized--the brakes on my vintage racer were 40 years old and thought, "This is really crazy."

Question: In your second novel, Brown, main character McGee Brown is a former sports writer turned amateur detective. Are you a sports fan as well as an adventure traveler? Any detective work in that daredevil past of yours? 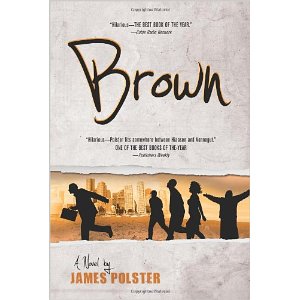 James Polster: I am a sports fan--more and more all the time as I realize I am probably not going to medal in the Olympics or pitch in a World Series. I think that's always been fairly certain. I never was a detective, but I had a studio in New Orleans that looked like something out of The Maltese Falcon, and a friend kept insisting we become detectives because of this.

Question: After your world travels, you ended up in Los Angeles, a kind of jungle in its own right. What took you to L.A.?

Question: What can fans expect from you next? Are you working on anything now? And, just so we can live vicariously, do you have plans to head back to the jungle anytime soon?

James Polster: The new book is The Prankster. It's science fiction but most of the story winds through present day Earth--quietly funny and unexpected. Next--The Woman in Pirates Alley, a Mick Vijon mystery. Mick is a one woman detective agency--not her first choice--but it was the only thing her old man had to leave her. She doesn't know karate, is not very good with a gun, but is pals with most everyone in New Orleans and gets by on wit.

I may be heading back to the jungle. I've spoken to some of the rainforest community, and there is a particular section of the Ecuadorian jungle, the Yasuni, they'd like to save. By coincidence, it's where I went on my first trip into the jungle. There is actually a photo of me in that jungle which appeared in the New Orleans Times-Picayune, and the newspaper clip has been hanging on the wall at Antoine's in New Orleans for many years. The waiters tell me it's a big hit on tours--not because it's me or it's such a great picture--but because the headline is, "You'll Never Get Out Alive--But He Did."