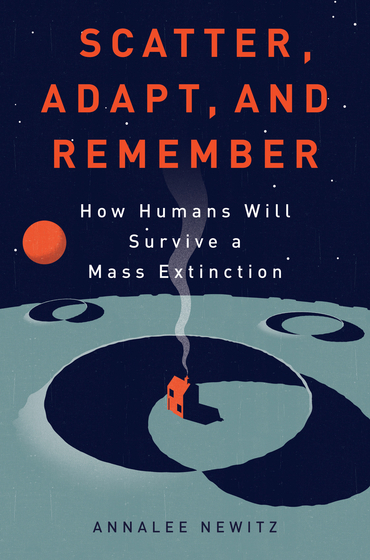 An Amazon Best Book of the Month for May, Annalee Newitz’s Scatter, Adapt, and Remember: How Humans Will Survive a Mass Extinction is a fascinating and entertaining look at mass extinctions. Newitz, science journalist and editor of the science website io9.com, explains that although life on Earth has come close to annihilation more than once just during the last million years, there’s cause for hope. Every time a few creatures have survived, evolving to adapt to the harshest of conditions. Scatter, Adapt, and Remember focuses on threats old and new, as well as how scientific breakthroughs today will help us avoid disasters tomorrow. From simulating tsunamis to studying central Turkey’s ancient underground cities; from cultivating cyanobacteria for “living cities” to designing space elevators to make space colonies cost-effective, Newitz takes the reader on a remarkable journey through the science of mass extinctions.

Does this book help people to take the long view? Is it the kind of the book where after you read it, you’ll never worry about the time wasted waiting in line or when someone cuts you off in traffic ever again?

You'll probably still be pissed about waiting in line, especially if they run out of your favorite flavor right before you get to the ice cream counter. But this book does encourage you to take the long view on the human species. You may appreciate that humanity isn't doomed just because we have a few annoying habits. My goal is to put our survival in perspective, by introducing readers to other species that have survived horrific disasters—as well as groups of humans who prevailed against plagues, famines, and worse. The apocalypse is complicated—just because we suffer losses and make mistakes doesn't mean humans won't survive. And we may come out the other side of calamity better off than we were. 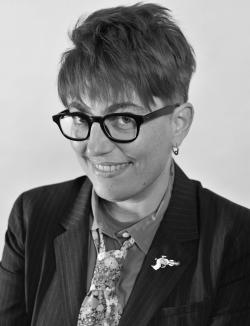 Do you have a favorite mass extinction? Why?

I'm most fond of the mass extinction that ended the Permian period, 250 million years ago. It was the worst mass extinction in history, caused by supervolcanoes that unleashed so much ash and carbon into the atmosphere that the planet suffered rapid climate change. Ninety-five percent of species died out in less than a million years. My favorite part is actually the early Triassic, when the planet was recovering. Many different kinds of seriously weird animals, including a bunch of giant proto-crocodiles, evolved and died out before our ecosystems were stable again. I like this period because it's our best example of how the planet recovers from what amounted to environmental collapse. It took 30 million years before you could say the ecosystems were stable, and then about 20 million years later there was another mass extinction. Those were tough times. But our ancestors, the goofy-looking tetrapods who evolved into mammals, made it through. It's thanks to them that we're here now.

Is there such a thing as a luxurious or even mildly pleasant mass extinction event?

It all depends on your perspective. I think that one of the survivors of the End Permian extinction, the burrowing herbivore called Lystrosaurus, probably thought things were pretty sweet. All its natural predators were dying off, and the sooty air may have resembled what it was used to breathing underground. So it was suddenly like the whole planet was Lystrosaurus heaven. Nice dirty air, plenty of roots and slime to eat, no giant tooth-faces to hide from.

But generally mass extinctions are probably best described as mildly unpleasant, most of the time. They may be set off by a crazy disaster, like a volcano or an asteroid slamming into the planet. But these violent episodes only become massively fatal by causing climate changes that take hundreds of thousands of years to kill everybody off. From the perspective of an individual lifetime, this would probably seem like a gradual siphoning away of luxury—maybe a few dozen species go extinct every year, but nothing catastrophic. Until, in retrospect, you realize that it is.

Can one find a mass extinction, or what happens in the aftermath, beautiful on a kind of grand scale?

Definitely. Each mass extinction effectively creates a whole new world, with new animals, plants, and insects. If you could live for millions of years and watch one happen, it would be like witnessing the death of one set of ecosystems and the birth of another. You'd see the continents ripping apart, and the oceans changing shape. It would be incredible.

Can you share what surprised you most in your research for this book? A fact, an event?

There were a lot of surprises. I think the main one was how long these mass extinctions take. I imagined your typical apocalypse, with the world bathed in fire and then re-emerging from the ashes. But realistically, these events take as long as two million years, and are usually caused by climate change. So it's kind of like the Earth gets slowly smogged to death, and even during the worst mass extinction there are still new species evolving in the ruins.

Is someone or something behind all of these mass extinction events? Is there someone we can blame?

You can blame the entire complicated history of the planet, with its carbon cycles and plate tectonics and habit of getting in the way of flying space rocks. As geologist Peter Ward puts it, the planet is a kind of Medea figure, always killing her children. That said, it's pretty clear at this point that climate change causes mass extinction—and it seems very likely that humans are contributing to climate change right now by releasing so much carbon into the atmosphere and the oceans. What's heartening is that as soon as scientists figured out that we are doing this—which was only a few decades ago—activists and even (yes) politicians and writers starting working to curb our carbon emissions. I think we are on the right track with the quest for alternative fuels and biodiversity, but things may get a lot worse before they get better.

Do you think you’re better prepared now to face a mass extinction event or less so, now that you are such an expert on them?

I'll never personally face one, because they take at minimum hundreds of thousands of years. But I am persuaded that we may be in the early stages of a mass extinction right now, and I'm prepared to yell as loudly as possible about all the ways we can prevent it from happening. This book is just one instance of my yelling.

Do you worry about mass extinctions more now than before you wrote the book?

I worry more about people not pursuing the pathway of survival. I'm actually far less worried about humans dying out, and more worried that we'll have to endure a really long period of awfulness and deprivation before we get our act together and maintain Earth's environment in a state that is healthy for us and our current ecosystems.

If you wanted to be mass-extinction-proof, what kind of animal would you be?

I'd be a human, but a lot smaller. The smaller you are, the easier it is to find enough food to survive!

If you had one piece of advice for the ordinary human-on-the-street who wants to live through the next mass extinction, what would you tell them? (Or do they have to read the book?)

Read the book if you want my specific suggestions, which range from practical to very futuristic. But there are also the obvious things you can do, like trying to create less waste, supporting the use of fuels that don't shoot carbon into the environment, voting for policies that preserve diversity in land use and discourage factory farming. But there are also the less obvious, and perhaps less measurable things you can do, like not basing your decisions on the idea that humanity will die out tomorrow. Try to make decisions that you think will lead to a world where people could still be living in one hundred thousand years. Don't count on us going extinct. Count on us surviving. And have compassion for our progeny.

Translation as an...
Read