A Matter of Perspective: Using Distant and Tight Third Person 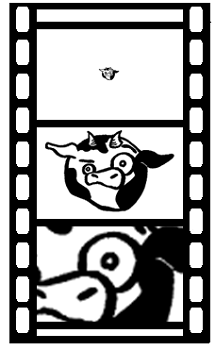 Anyone who has written or read more than birthday cards has more than likely heard the terms "tight (or close) third person" and "distant third person." And yet, when it comes to nailing down exactly what they mean, when and how to use them, and why something feels off about someone's use of tight third person, it can start to get a bit complicated. At its simplest, all the two terms do is describe the zooming in and out of a book’s literary camera. Tight third person means the literary camera has a tight focus on the viewpoint character (sometimes, so tight as to be just on their face) so as to emphasize the emotions and thoughts of the character. And distant third person means the camera is panned back a bit, to give us a less emotional and more literal view of things—and also to show us the character has feet.

Writers tend to be very opinionated about—well, everything! But in particular about what distances are best. But, of course, in reality, you need all the distances (or at least, more than one). Sticking to just one distance would feel bizarrely monotone, like holding a single note for five minutes in place of a melody. Instead, most novels use different pacing, narrative distances, and vocabularies for different occasions, which the author weaves together seamlessly—and naturally—like a maestro.

Of course, that isn’t to say you should use all the distances all the time—and mixed up with each other willy-nilly. As engaging as the excellent use of distances can be, unexpected shifts in distance are discordant, and one of the surest ways to disengage your reader. So, to help tackle the issue, I’ve adapted the five “psychic distances” outlined by John Gardner in his genius guide to writing: The Art of Fiction, and gone over briefly some of the details of each distance and how to move elegantly between them.

Distant Third aka. The Historian
“It was winter of the year 1853. A large man stepped out of a doorway.”—The Art of Fiction

The Historian tells his story from an omniscient third person point of view. Meaning, it is the all-seeing eye of ultimate narration—and everything that happens in the story is fair game. Of course, that being said, the Historian strives to cover all the events of the story in as unbiased and factual a manner as possible—becoming themselves invisible. For that reason, this distance is super formal, mostly informative, and is often used for setting the scene. It’s about as far from realistic, intimate, and personal as you can get, but it can be awesome for giving your story the feel of a legend or myth.

The Historian risks getting dry and is too distant to give characters their proper attention, so it’s a good idea to limit this distance to transitions, introductions, and endings. The Historian has a fantastic gravitas to it precisely because it reads like something out of the history books--but keep in mind, not many people read history books for funsies.

Opinionated Narrator aka The Storyteller
“Henry J. Warburton had never much cared for snowstorms.”--The Art of Fiction

Like the Historian, the Storyteller also spins his yarn from an omniscient third person point of view. But unlike the Historian, the Storyteller narrator often has a strong voice, with a distinct personality, vocabulary, and quirks. While the Historian strives to employ an invisible, unbiased narrator, the Storyteller’s narrator is a character in and of itself—telling the story to the audience in its own voice. Because of that, it’s far less formal than the Historian—and far more self-aware and intentionally artful. It’s the kind of voice a fireside storyteller might employ when starting his tale—personal, warm, and playful but also not intimately involved in the story. And while it has artifice, and you are aware of the words as you read them, that doesn’t subtract from its value. It’s easy to get sucked in by a strong Storyteller.

Of course, it’s easy to go too far with this voice—you have to be careful not to let it go from clever to stilted. And it also risks never letting the characters themselves have strong, unique voices.

The most distant of the third person limited points of view, the Literalist is often the standard distance for a book, bridging the gap between the distant, narrator-heavy bits and the tight, character-focused bits. With the Literalist, you are literally writing down what happened—but limiting it to what your viewpoint character could reasonably be expected to see. And that’s where the “third person limited” part comes in: If the viewpoint character didn’t see it? It didn’t happen--at least as far as the reader’s concerned. This may initially seem too limiting, as so many cool plot aspects will go unappreciated by the reader until their second read. However, it’s a fantastic way to build narrative tension, as instead of drawing tension from reader knowledge, the reader shares the character’s tension, creating a much stronger bond between the character and the reader.

As the most distant of the third person limited points of view, you can still hear the narrator’s voice. The description is not exactly as the main character would think it, and the reader is allowed a comfortable distance between themselves and the characters, so they don’t have to associate themselves with characters they don’t fancy, and so that it still feels like reading—rather than experiencing--a story. It’s just more like hearing the story from only one person involved, rather than hearing the version that combines what everyone knows.

Close Third aka The Opinionated Character
“God how he hated these damn snowstorms.”--The Art of Fiction

This is perhaps my favorite narrative distance and is what most people mean when they say “close (or tight) third person.” It’s also the first distance where I’d say the reader experiences rather than reads the story. The Opinionated Character takes third person limited a step closer in--focusing on character thoughts, feelings, and sensations--and makes the character’s voice more important than the narrator’s. This means the vocabulary and opinions of the viewpoint character color the narrative, and if there isn’t a good reason for the main character to think something, it shouldn’t come up. It’s also the first distance in which it is appropriate to put character’s direct thoughts. This distance ties the reader’s experience even closer to that of the character—making it delightful to use with sympathetic villains, as it forces your reader to identify with usually unpalatable people, and maybe even tricks them into rooting for them.

Close third is used for the majority of the narration of most of my favorite books. But that doesn’t mean it doesn’t have its drawbacks. For one thing, it can feel a bit breathless—and dense. It can be extremely jarring to be dropped into the middle of a scene in close third--like waking up to a cat’s face one inch from your own. So yes, use close third--but make sure to give us some breathing room sometimes, too.

Stream-of-Consciousness aka You Are the Character
“Snow. Under your collar, down inside your shoes, freezing and plugging up your miserable soul.”--The Art of Fiction

This is where the camera pushes right through the back of the character’s head and lets the reader see out of their eyes. In Gardner’s approach, this actually slips into the “yous” and “yours” of second person, but I think there’s room to take a half-step back and use this as a third person (very limited) that focuses solely on the sensations and emotions and thoughts of the viewpoint character, eliminating the narrator’s voice entirely. It’s perfect for very intense scenes—like romantic, climatic, or fight scenes—but unless you’re doing an experimental piece, it’s generally not appropriate for every paragraph use.

Changing distances is like shifting gears: generally, you want to do it one level at a time, as shifting metaphorically from first to fourth can make for a jerky and uncomfortable ride. Likewise, if you are changing the point of view character (like changing the driver of a car), it is usually best to go distant to make the transition (or stop, even, with a scene break), rather than staying in tight third person and "head-hopping." Most scenes should stay at a medium distance, which gives you room to move closer for intense scenes (like climaxes—which are often the most intense of all) and farther away for beginnings, endings, and transitions. That being said, you don’t need to include all five levels in your book. Pick a range you’re comfortable with, and work within that. So long as you have some range in your narrative distance, you’ll have the flexibility of expression you need to tell a damn good story!