The Mysteries Behind Gwenda Bond's Blackwood 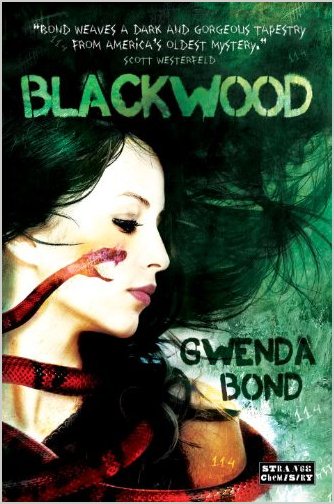 As reported recently, Gwenda Bond's first novel, Blackwood, has been acquired by MTV in a production deal with Lion's Gate and Kelsey Grammer's Grammnet Prods. And why not? The novel has a fascinating premise, based on the mystery surrounding the Roanoke Colony.

Around 1590, 114 colonists disappeared, the only clue, the word "Croatoan" carved into a post. In the present-day of the novel, the Roanoke mystery is just something to lure in tourists ... until 114 people disappear and two 17-year-olds find themselves caught up discovering what happened. Miranda's a misfit and Philip an "exiled teen criminal who hears the voices of the dead." Together, they have to deal with FBI agents and alchemists while trying to uncover the secrets of the Lost Colony.

The plot of Blackwood has a satisfying number of twists and turns, and advance praise has come from the likes of NYT bestselling author Karen Joy Fowler. With Bond fresh off of the exciting MTV news, Omnivoracious decided to get the inside scoop on the Roanoke situation from this rising star of YA fiction.

In addition to clarifying that the Roanoke in question is "Roanoke Island, North Carolina, not Roanoke, Virginia," Bond told us that "a major player in my novel," the show The Lost Colony at Waterside Theater on the island, is a real thing. "It's the longest-running symphonic outdoor drama in the country and just celebrated its seventh anniversary season. The original play was written by Pulitzer-Prize-winner Paul Green and debuted in 1937, though changes have been made over the years, of course. Several million people have seen it since then."

As for the mystery of the lost colony, Bond dredged up all kinds of information while writing the novel. She found out that "noted alchemist John Dee, involved in so many things during the period, was involved in the colonization effort, too." Along with other experts in various subjects, Dee assisted Raleigh "with the planning for the voyages that ultimately led to the ill-fated Lost Colony. There's even been a theory floated that Dee headed an earlier excursion, and the Newport Tower in Rhode Island was the result. But that seems far-fetched…"

Bond admitted that historians "don't really know that much" about the more than 100 men, women, and children from England who signed on to the 1587 voyage to establish a permanent settlement in the New World. "While we know all about Sir Walter Raleigh, the main idea man behind the early colonization effort, and Governor John White, an artist by training who became the leader of the colony, for the most part what we know about the colonists are their names and general ages. But there is little solid evidence about why they signed on to such a venture… leaving plenty of room for speculation."

What fate did the colonists meet? As you might imagine, theories range "from the likely (that some colonists were absorbed into the region's Native American tribes) to the unlikely (alien abduction, cannibalism)." As recently as earlier this year "researchers announced some intriguing findings uncovered in one of John White's maps that may yield a new hypothesis.

"The theory in Blackwood, however, hasn't been put forth before that I've been able to find," Bond said. "But add together an enduring mysterious mass disappearance, the lack of information about who the colonists were, and John Dee, and what do you get? Some strange alchemy and -- I hope -- a good story."