Greasing the Pan: The Best of Paul T. Riddell Provides an Alternative History of SF/Fantasy

Paul T. Riddell's Greasing the Pan collects over one hundred articles, essays, polemics, and reviews connected to the fields of science fiction, fantasy, and horror. Written in the 1990s and early 2000s, these pieces constitute an alternative history of genre, and thus are extremely valuable to anyone interested in a different point of view. What do I mean by a different point of view? Riddell constantly tests and pokes at various assumptions common to the field--about the value of awards, of conventions, and much else. In that Riddell's an absurdist, he resembles Hunter S. Thompson, although with a more limited subject matter.

At times, he goes too far, his enthusiasm and his passion making his conclusions suspect. But that said, there's so much food for thought here for any fan of genre fiction. To give you an idea of how much of a gadfly Riddell seemed at the time, here are a few titles of his essays: "A Bestiary of Fan Boys," "Why Science Fiction Needs a Respite from Costume Competitions," "Tina Brown to Take Over Editorship of Asimov's [SF Magazine]," "Conventions and Other Forms of Vocational Suicide," "and "Bruce Sterling Fitted with Self-Promotion Inhibitor." At times, his confrontational approach backfired, in the sense that the heat generated tended to override measured discussion of a particular issue. But there's much to admire in the fact that very few other writers were willing to take on the sacred cows of genre. And, too, there're great essays on science in here, including "Anarchy and Palaeontology," "The Problems with Cloning Dinosaurs," and "A Study of Theropod Dinosaur Psychology and Social Habits Using Unorthodox Sources."

The almost 500 pages of text showcase a lively and inquisitive mind, one equipped with a strong sense of what's fair and what's unfair, and able to see the bitter humor in all kinds of genre-related craziness. It's often in tone like reading an unholy combination of Harlan Ellison and Joe Bob Briggs.

For those not familiar with the SF/fantasy subculture, that subculture can be a quagmire of special interests, eccentricity, and spirited argument--much like a dysfunctional family. Most of the time, this family, in the final analysis, loves its members, but Riddell often got the short end of the stick in this regard. Too many people didn't understand that his full frontal assaults came out of a love for everything connected to genre, and an inability to quietly stand by while witnessing stupidity.

Considering that Paul T. Riddell often credits me with part of his decision to leave the world of writing about science fiction and fantasy, it may seem ironic that I'm featuring his collected nonfiction here. But the fact is, as much as I might've disagreed with Riddell on certain topics, I've always respected his willingness to put himself on the line to discuss things that other writers were too cowardly to take on. The always entertaining Greasing the Pan, then, is a great way for SF/fantasy fans to get another view of the field. (Also check out his companion volume, The Savage Pen of Onan.) 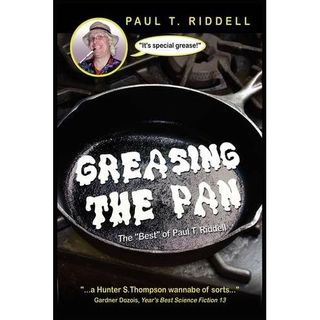 EotWKLRU is on vacat...
Read