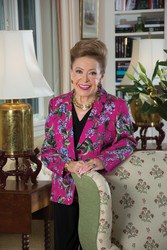 Mary Higgins Clark passed away in Naples, Florida, on Friday, January 31, at the age of 92. Known as the Queen of Suspense, Clark reigned for decades at the top of best-seller lists, starting with the novel Where Are the Children?, published in 1975.

Born in New York City on December 24, 1927, Clark wrote her first poem at age six. Clark’s mother would request that Clark recite her poems to visiting friends and family. As Clark related in her memoir, Kitchen Privileges, her mother would say after the recitation, “Mary is very gifted. Mary is going to be a successful writer when she grows up.”

Clark worked as a telephone operator and a flight attendant before she took writing classes at New York University. Soon Clark began publishing her stories in magazines and landed a full-time job writing radio scripts.

Clark’s first published novel was 1969’s Aspire to the Heavens, historical fiction centered on George and Martha Washington (and later republished as Mount Vernon: A Love Story). The novel was not a success. As Clark wrote in an updated introduction to Where Are the Children?, the book “went directly to the remainder tables as it came off press. That didn’t faze me—I considered it a triumph. After all, it was published. Triumph or no, however, I sincerely wanted my next book to sell.” Clark—widowed and with five children—took a look at her own bookshelves and the stories she liked to read, and she decided to try her hand at suspense.

Simon & Schuster released Where Are the Children? in 1975, the first in Clark’s unbroken string of 56 bestsellers. “The publication of that book marked a turning point,” Clark said in the book’s introduction, “and began a long and happy marriage with Simon & Schuster that has lasted to this day.”

Blockbuster novels such as A Stranger Is Watching, The Cradle Will Fall, Stillwatch, and You Belong to Me followed. Clark also released her memoir, Kitchen Privileges, hearkening to how her own mother rented rooms “with kitchen privileges” to support the family after Clark’s father’s early death.

Clark also teamed up with her daughter, Carol Higgins Clark, to write five holiday-themed suspense novels, and with author Alafair Burke (The Better Sister and The Wife) to write the Under Suspicion series. Mary Higgins Clark most recently published Kiss the Girls and Make Them Cry in November 2019.

Throughout her career, Clark stayed with Simon & Schuster, a rare choice among best-selling authors, who are frequently wooed by other publishers to switch houses. Said Simon & Schuster president and CEO Carolyn Reidy in a post on Mary Higgins Clark’s website, “She was deservedly known as the Queen of Suspense, but in our building we have long and fondly thought of her as the First Lady of Simon & Schuster. Today we did not just lose an author, but a true and well-loved member of the Simon & Schuster family.”

Said Michael Korda, Editor-in-Chief Emeritus of Simon & Schuster, in the same post: “Mary and I have been dear friends, and worked together since 1975, during which time we never had a cross word between us, which surely sets something of a record for author-editor relationships.”

Mary Higgins Clark leaves behind a legacy of smart suspense novels that have thrilled and delighted readers throughout her forty-year career. She will be deeply missed.