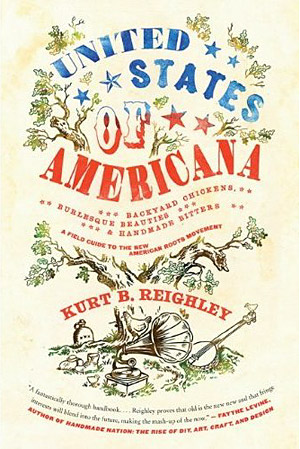 When I picked up United States of Americana: Backyard Chickens, Burlesque Beauties & Handmade Bitters, the recent field guide to the American Roots movement by a former contributing editor for No Depression and current KEXP DJ Kurt B. Reighley, of course I expected to learn about music. Who are the forefathers (and mothers) of American Roots music? What are some of the essential gateway albums? That sort of thing. I wasn't even that surprised to find tips on "how to play a washboard."

What I didn't expect to learn is that there is a DJ in New York who only plays shows on hand-crank Victrolas and wax cylinders, or that there are now barbershops that specialize in straight-razor shaves. In this broad survey of DIY, durable living, Reighley offers up tips from hundreds of interviews and a fair amount of personal research on such varied life skills as beard growing, water-bath canning, making a corncob pipe, and choosing a pre-Prohibition-era cocktail. I am now frantically in search of items like selvage denim, hard tack and salt pork, and Wellingtons. ("I love my Wellingtons," says Reighley. "I'm like Paddington Bear.)

The author spoke to me recently about his experience of Americana over coffee and doughnuts:

Reighley: The response to this book has been really really positive because people are excited about the whole idea of control. There's that theme running underneath all these things: take control of your life. If you learn to preserve your own food you have more control over what you consume and what your kids consume. If you know how clothes are made, you know whether or not you're getting a good deal. You know where it was made, under what conditions. If you pull the camera back a little bit, the fundamental principles outlined in the book are going to appeal to just about anybody.

Amazon: What drew you to this initially? I assume it was music.

Reighley: It was, and it wasn't. What drew me to it was I had put together a proposal for another book inspired by the freak folk movement, not even necessarily American Roots music, but there's some overlap--Devendra Banhart, Antony and the Johnsons, CocoRosie. I put together a book proposal based on that and it was more light-hearted but it did talk a lot about crafts and visual arts and it was inspired sort of loosely by this discussion Antony and I had had several years ago. He had this concept "in the time of flourishing beauty" which inspired a show at On the Boards with Antony and Coco and William Basinski and Devendra Banhart.

I started to see kind of a throughline between the resurgence in interest in crafts and learning to play an instrument and then I started connecting things a bit more. It wasn't that I lost interest in the music component, but I was so familiar with that component already and I was having so much fun learning about the other things, and they just kept snowballing. People kept giving me information and ideas, they were so excited: well, have you thought about blank and blank and blank.

I come from a music background and sometimes DJs and record collectors can be very "information to the bosom," like very selfish, they don't want to share. There's that whole tradition amongst DJs of taking the labels off records and obscuring records so people won't know what you're playing. So I kind of expected to encounter a little more of that but in fact people were really excited to share information and it was so invigorating because that was what I wanted to believe was driving this, that people were excited about learning and wanted to pass that learning along and wanted people to take advantage of the resources we have, older people, the physical library, take advantage of these things, preserve them, celebrate them before they go away.

Amazon: As an example, butchers. Was food part of it from the beginning?

Reighley: The food component changed a lot because originally it skewed more toward my kind of contrived idea of "what kind of food would people who like Americana music like?" If you read through my notebook for the first couple of months I was talking about macaroni and cheese and cornbread and things like that. Then I was like, you're pigeonholing yourself. This is just missing the point. There's a parallel movement in actual food production and food preparation that goes beyond the dishes you would set out on a checkered tablecloth. And once I embraced that, canning was really the gateway. Canning then led to butchering and thinking of all the things I'd seen at Brooklyn Flea and farmer's markets.

Amazon: But those two things--canning and butchering--come back to your main points of preserving the expertise and doing things yourself.

Reighley: It was so empowering. There were times like any writer when I was like I'm never going to finish this book I can't believe they even gave me a contract. I'm such a hack. It's all I can do to write 750-word doo-dads for local alternative weeklies. But then, consarnit, I'd finish a baby blanket. I did successfully learn how to pickle. And I did learn how to make jam. And that helped a lot.

Amazon: So did you do all these things in the book?

Reighley: I did not do butchering. I have not learned how to butcher a hog yet. I would like to learn eventually. Another thing I didn't get to explore that was in the original proposal was I want to learn about guns and hunting because I don't know about it, really. And what I do know is deeply biased and I'm curious to learn about that.

Amazon: Are there things you did for this book that you had never done before that are now part of your regular life?

Reighley: Canning. That was one where I thought, Oh, I'll learn it and probably never use it again. But it became really attractive. And my hand crafts are out of control.

Amazon: What are you working on, mostly knitting?

Reighley: Knitting, embroidery, and needlepoint, although my album art needlepoint is completely stalled because someone is always having a baby. And then I get excited and I want to make them a blanket. So, I've got blankets going, different blankets. And I love making them and I love knowing that kids grow up with them and that it's a part of their life and that it's cherished. It's so special to me. I'm embroidering Valley of the Dolls pillowcases. Sublime Stitching was having a contest where Jenny Hart who runs Sublime Stitching wanted stitchers to do projects that used three or more of her kits, and I had come up with this one that used sex and drugs and rock and roll that used her medicine chest kit, and her va va voom burlesque ladies and her rock and roll instruments one. That's still on the to-do list. I've got a hat going for Robin Pecknold and a hat going for John Roderick.

Amazon: Are the clothes hard to find?

Reighley: It's getting harder to find some of the older Pendletons at thrift stores but Andy, the unofficial historian at Filson, was telling me that he's grown up here his whole life and when he was a kid you could still find for 50 cents half a dozen of them when you walked into Value Village. It's harder now. And people don't always take care of them. They don't know how to care for wool.

Amazon: I wanted to talk about this quote you have in the introduction about nostalgia, how this movement embraces tradition but is not consumed by nostalgia. Where do you draw the line?

Reighley: Nostalgia is sort of chasing your tail. It's Disneyland. It's Frontierland. That was the original working title of the book and it was jettisoned for a couple of reasons. It is such a fine line. Nostalgia puts a date stamp on things and makes it feel more disposal. It has this element of disposability that the things I'm discussing don't have. It's talking about and celebrating longevity and there are very good reasons why these practices and goods have endured. I feel like if you start categorizing them as nostalgic it puts them in this little box and drains them of some of their validity. It's the opposite of when marketing people start stamping "authentic" over everything. Nostalgia. Sleeve garters were something that kept coming up.

Reighley: Exactly! And sleeve garters are one of those things they were very important to generations of men. You needed them. And I can understand why for a small segment of the population they might still be a fun accessory but really, you know, you don't want to look like you work in an ice cream parlor.

Amazon: What didn't make the cut?

Reighley: I have this whole other list still of things I didn't address. I didn't get to address spirituality hardly at all. I really think there's this weird parallel between the things that are going on in the book and the ideas of taking responsibility and control of community. And the resurgence we've seen with Sojourners and new young conscious Christians, I think there's a parallel there. The whole retro bicycle community, there's a parallel there that I didn't explore. I ended up having to cut home brewing because it's such an expansive area. Smoking and curing. I never got to delve into the tradition of scouting in America, the Boy Scouts and the Girl Scouts.

I didn't want the book to get too academic, and I wanted it to have breadth. I wanted this book to get people excited. Two models for this book were books I had as a kid that my grandma gave me, one of which is called The Hodgepodge Book, which is a book of folklore organized by theme--seasons and holidays and stuff--and the other one is called the Sierra Club Summer Book. They were both books aimed at children, very smart books full of information that could be jumping off points for other things. I really wanted this book to function like that.

Amazon: Can you tell me about the illustrations?

Aaron was great. He and I worked hand in hand. I knew him from working with him at 826 Seattle and I knew that he liked bison. He draws a great bison. I love this picture (see left). That came out of the Peter the Great discussion.

Amazon: The weekend I finished reading this book, I also happened to be canning applesauce and I randomly went to a square dance. I found that hilarious and also pretty weird.

Reighley: I think we're seeing that idea of community definitely take hold again. Social networking can make you feel like every man for himself shouting as loud as he can, but that's not nearly as rewarding as doing things with other people.

If you're in Seattle you can see Kurt B. Reighley and Aaron Bagley Thursday night at the Sunset Tavern for the United States of Americana book release party.--Heidi