Abi Daré on "The Girl with the Louding Voice" 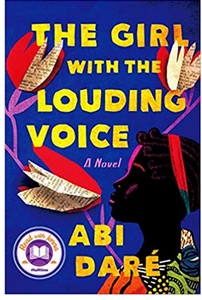 Abi Daré’s debut novel, The Girl with the Louding Voice, is like a blend of Etaf Rum’s A Woman Is No Man and Tara Westover’s Educated (so buckle up). In it Adunni, a fourteen-year-old Nigerian girl, endures a series of unfortunate events in her quest to get an education. The alternative is a life of servitude, something Adunni experiences firsthand when, after escaping an arranged marriage, she lands herself in an even more precarious position in the employ of a sadistic wife and her debauched husband. Buoyed by the memory of her late mother, who wanted her daughter to buck cultural confines and find her (louding) voice, and with the help of a few unlikely allies, Adunni sets about overcoming her sorry lot. The Girl with the Louding Voice is a rousing tale of courage and pluck, and unexpectedly charming. It’s also a reminder of the power of books, especially for those of us afforded the luxury of taking reading, and learning, and dreaming for granted. Here, Abi Daré talks about the genesis of the novel, and the haunting questions that informed her writing.

For most of the two decades I spent growing up in Nigeria, there were always young girls and women who came to work for my family, and for the families around us in our middle-class neighbourhood in Lagos. These girls were called housemaids or house girls, and were often brought by one of their family members acting as an agent, and left to work for a year, two years, sometimes longer.  The older girls who lived with us would sometimes share, often in broken English, their need to escape poverty, the real sense of loss and sadness from missing home (which was usually a village or neighbouring country), the desire to go to school or to start a trade.

The use of underage girls as domestic servants is a common occurrence in many parts of the world, and Nigeria is no exception. Despite the creation of an anti-trafficking agency by the Nigerian government (NAPTIP) in 2003 in an attempt to tackle trafficking of persons across the borders, the issue still persists. There is a lack of clarity around the minimum age requirement for hiring domestic workers, and as a practice that is deeply engrained in our culture, it is often difficult to challenge.

I remember a girl called Mariam, who lived with and worked for one of our neighbours.   She was about eleven and I was about thirteen, and because I spent all of that summer in my neighbour’s house, Mariam and I became friends.   Mariam was small, had a shaved head, and when she laughed, which was often, the house would seem to vibrate from the joyous sounds from her mouth. I had no sister and so I found a playmate, a sister, in Mariam.  But Mariam was not like me. She worked. She swept and cleaned and dusted and tidied. Every time I was asked to join Mariam in doing some chores, I always came up with an excuse not to help: homework. Mariam had no excuse: she didn’t go to school.  Returning to school at the end of summer, I remember watching as Mariam stood behind Aunty. Tears ran down her face.  By the time I came back about six weeks later, she was gone—sent to work for another family.  Like the maids before her, she was quickly replaced.

I never saw her again.

But I never forgot her.

Often, she would peek out from where she had stayed hiding in my memory. At night, I would lie awake, wondering. Is she all right? Where is she? Sometimes I would hear her laughter. Other times, her eyes, wide and bright, would light up the dark recesses of my mind. Maids were girls like Mariam. Many of them were dressed in tattered, dirty clothes with unkempt hair. They would stand behind a family of well-dressed, well-fed, well-spoken children. Their heads bent. Silent. And in silence, many of them suffered physical and sexual abuse.  Even as a young girl, I wondered why they were made to feel like outcasts, when without them, homes simply wouldn’t function? I had questions, questions I never voiced:

Why were they not allowed to watch TV?
Eat at the dining table?
Wear nice clothes?
Go to school?

It wasn’t until many years later, after I had my own children, two daughters, that I was began to deeply reflect on this aspect of my childhood.   When my daughter turned eight, I asked her, as politely as possible. “Will you help me load the dishwasher?” Her response was a series of moans. She wanted Haribo sweets before she would lift a finger.

I asked her, “Do you know, that there are girls like you, probably working for families like ours in Nigeria?”

“Working in an office?” she asked, clearly surprised. “Do they get paid? Are they rich? How cool!”

I explained that it wasn’t an office job. It wasn’t cool.

It meant no holidays. It meant, for many girls, no school, and no TV and no nice clothes. My daughter was shocked and then saddened. That night, I started my research and discovered that the ill-treatment of young girls was still an issue in Nigeria. I read and absorbed every piece of literature I could find, watched every harrowing video on social media that had documented abuse.

But it was an article about a thirteen-year-old girl who had been scalded with boiling water by the woman who employed her that fueled my desire to start writing. It wasn’t just the horrific injuries in this article that got to me. It was also the fact that her face was blurred out.  Almost like a deliberate act to disconnect her from the world, as if to say: here is a nobody. Another statistic to report. I wondered, who is the maid in this article? Where has she come from? Does she have a family? What does she want out of life? What are her hopes and dreams?  What were the hopes and dreams of the girls I grew up with? What were Mariam’s dreams? Where was Mariam now?

Each time I saw my daughter, I thought of these young girls.  And I thought of Mariam. When I visited Nigeria while I wrote my book, and tried to engage in conversations with some of the domestic workers I met, I again thought of my daughters. And of the girls that served us growing up.

In July 2019, a Nigerian television production company called Salt & Truth released an equally heart-breaking trailer for an upcoming documentary called House Girls, which highlights the experiences, the abuse, of house girls in some Nigerian homes.  The young girl in the trailer felt to me like a real life Adunni in many ways.   The clip generated over 35,000 comments and was watched and shared by millions, pushing the conversation to an even wider audience and provoking engaging discussions.  One thing gives me hope:  The rage of the people that watched the clip. Their recognition that this is an issue that needs urgent review and resolution, and most of all, their palpable desire for change.
The Girl With The Louding Voice was born out of my desire for answers. I was desperate to tear away the veil from these young girls who have worked so hard for so little, but above all, I was eager to join those who struggle to shed light on this issue in the hope that we can all start a conversation together that will drive us, collectively, to take a step towards positive change.