Though you might have thought of her as Princess Leia, the Mystery Woman from The Blues Brothers, or Sally's best friend in When Harry Met Sally, Carrie Fisher made a name for herself as a bestselling author by being very much herself. 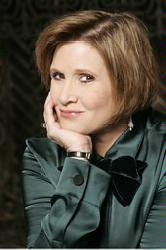 Both mischievous and brutally honest, Fisher mesmerized readers with her memoirs that candidly revealed the effects of drug addiction, mental illness, romance, and fame in her topsy-turvy life. Her four novels—starting with her first book, Postcards from the Edge—explored similar themes with her fictional characters.

The daughter of singer Eddie Fisher and actress Debbie Reynolds, Carrie Fisher was born into the life of Hollywood royalty. When her father left her mother and married Elizabeth Taylor three years after Carrie was born, scandal tinged that life.

Following in her mother's footsteps, Fisher joined the acting profession. While she was still in her teens, Fisher landed a role in the film version of Shampoo, starring Warren Beatty.

Her next and ultimately most iconic role was that of Princess Leia, in Star Wars: A New Hope—a surprising leap into fame that would affect her for the rest of her life. Fisher's just-released memoir, The Princess Diarist, is based on the diary she kept during the shooting of the movie and reveals—with the angst appropriate to the nineteen-year-old that she was at the time—the affair she had with her handsome and married co-star Harrison Ford while they were on set.

Fisher's first book, Postcards from the Edge, was released in 1987 and is considered a novelized version of her early life. She brings her brash, sometimes uncomfortable, but always entertaining style to every page. Wishful Drinking, her first official memoir, was based on her one-woman show of the same name. Delving into the details of her cocaine addiction, her electroshock therapy, her short marriage to Paul Simon, and her celebrity status, Wishful Drinking is among the most candid and entertaining Hollywood tell-alls ever written, and the audio version is narrated by Fisher herself.

Fisher recently returned to the big screen in 2015 in The Force Awakens as General Leia Organa. She completed filming of the following Star Wars installment, Episode VIII, over the summer. On her way back to Los Angeles from shooting episodes of the TV show Catastrophe in London, Fisher suffered a heart attack on the plane. She died on Tuesday, December 27, 2016, at the age of sixty.