The Morbid Ruminations of a Weird Dad 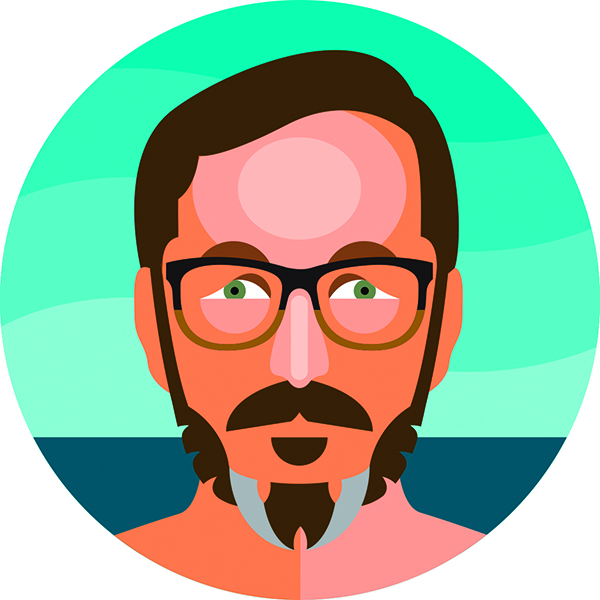 A portrait of John Hodgman by Aaron Draplin

You've probably encountered at least one of these John Hodgmans.

John Hodgman authored the bestselling trilogy of "Complete World Knowledge," a collection of false information and trivia, including the definitive list of 700 Mole-man names. He became a semi-regular on Jon Stewart's The Daily Show, dispensing more dubious facts as the “Resident Expert,” while his “Deranged Millionaire" exposed the bizarre, imagined lives of the ultra rich, the One-Percent's one-percenter. He is a former real-life literary agent who played an imperious, blowhard writer on HBO's lamentably short-lived Bored to Death. He believably personified a PC in a Mac commercial. He hosts the Judge John Hodgman podcast, settling disputes between actual humans on pressing issues such as flip flops, snoring, and elaborate cakes. He's done many more things, all in the same inscrutable, absurdist style that might confuse as many people as it delights.

Now John Hodgman is a self-described "weird dad with terrible facial hair" with a new memoir. Vacationland chronicles his journey into coastal Maine, a "metaphorical wilderness of middle age" where you wander alone with thoughts of your inevitable decline and demise. Sounds bleak. But the chapters of Vacationland—spanning awkward moments from his childhood to college, marriage, parenting, and beyond—are more straightforward than straightfaced, making these essays as relatable and moving as they are funny. And they're really funny.

At Book Expo in New York last May, Hodgman met us at 8:30 in the morning in our room overlooking the trade show floor to talk about his then-forthcoming book. That is a terrible situation for talking to strangers, but he was frank and insightful in his inimitable way. Here are a few highlights from our conversation—both transcribed and as a video below—mildly edited for clarity and concision.

Vacationland is our Spotlight Pick for November's Best Books of the Month.

We're here very early at the Jacob Javits Center for Book Expo America, [looks down toward the tradeshow floor] and all the madness is just starting to happen!

Tell us about your new book, Vacationland.

It's my new book of what I call stories, true stories. My previous three bestselling books—The Areas of My Expertise, More Information Than You Require, and That Is All—composed a giant, 1,000-page almanac of invented trivia and fake facts, like “The Nine US Presidents Who Had Hooks for Hands” and “700 Names of Hoboes from the Great Depression.” I came to finish that project, and I realized I didn't have any fake facts left. And what's more, now everyone is doing fake facts; it's pretty much all of culture right now. So that left me with only the mere, awful truth of my own dumb life, and I started telling stories from that life on stage all across this country and parts of Canada. And now I've collected them into this book, Vacationland. Vacationland follows my journeys as an asthmatic city boy through three different wildernesses: one being the rural hills of western Massachusetts where I spent lot of my youth, another being the painful beaches of rural coastal Maine, where my wife has instructed me I will accept my death. The third wilderness is the metaphorical wilderness of middle age, which connects those two things uncomfortably.

What's so painful about Maine beaches?

Maine, the state, is called Vacationland. That is its nickname, which is sort of a cruel joke because when they invented Maine in 1820, there was no such thing as vacation. No one could really go on vacation. You were tending a farm, or later getting your hand mangled in an industrial machine. Very few people could afford to go away for a week or two or more. And so vacation was invented, in this case, by wealthy Bostonians, whose idea of vacation was to go north, to a cold, dark place; to drink martinis and not speak to any of their family members; and stare out silently over bodies of water that you would never, ever, swim in because the ocean of Maine is made of hate and wants to kill you. It is profoundly cold, and if you fall into it you should get out immediately. But the beach offers no refuge, because the beaches of Maine are not sand—they're made up of jagged rocks and knives. Lots of people have done research into other places to go on vacation, and we've found quite a few. We've found places like Florida—the anti-Maine—where beaches are soft, and the water is warm and welcoming and makes you believe that you deserve pleasure. Maine is not like that, and yet people still go there all the time, including my wife, who loves Maine more than any other place or person on Earth. And that's why I go there.

What lessons of parenthood are you prepared to offer?

I'm a weird dad now, in my 40s, with terrible facial hair. I grew my facial hair for the same reason all weird dads grow their facial hair: it's an evolutionary signal to the world that "I'm all done."

What happens when you go into middle age, I've discovered, is you begin to contemplate the fact that the world does not need you, and indeed will go on without you. Kind of soon. Sooner than you thought! And confronting, essentially, that mortality was a very challenging thing for me to do. Because as an only child, I couldn't imagine that the world would go on without me, and frankly I found it insulting.

It's also a time when your children start to pull a little bit away from you—which I am told is age-appropriate self-individuation—but I think they smell death on me, and don't want to be around me. So a lot of the wilderness of middle age is a journey that you wander on your own as you contemplate those things. And I'll tell you something. If you want to contemplate death—boy, oh, boy—Maine has a lot to offer. If you like walking around under dark skies in the cold, as trees die around you and shed their leaves, guess what? Fall in Maine starts on July 29th.

Is there any ray of hope in this book? About moving through middle age gracefully and finding a way through to the other side, that's not, perhaps, beyond the veil of death?

Yes there is. The book happened because I had finished what I considered to be my life's work. Those three books of invented trivia were every joke I knew how to tell, every story that I felt I had in my life. Even though it was a lot of arch, absurd humor, there was also a lot of me, and personal storytelling in there. And I thought... I didn't know what to do with myself when it was done. When we reach those points—whether it's literal middle age or other big life transitional moments—and we feel like the best of us is behind us, and what do we do to fill up the time, it's terrifying. Luckily, I tricked my brain into finding a new path, initially by just talking on stage and performing the stories that grew into this book. And it was an incredible gift that my dumb brain gave me, and that our brains give to all of us, that when tried and tested, most of the time we will find a new path forward.

Got any more books in you after this one?

Oh yeah. I might have said before I wrote this book that I was done writing books. But now that I've written this one, I see a whole new way forward. I don't know what it looks like, and for the first time, a.) I trust that I can find that way forward, and b.) not knowing what it looks like is exciting, rather than terrifying.

I just want to re-state that thing about swimming. So the real gift of New England, actual and metaphoric, is it's a cold, dark, mean place, but one of a kind of rugged beauty. And the gift of swimming in Maine is: You survive it. Once you realize that.... Eh, what I said before was better.