Peter Heller stopped by Amazon's Seattle campus for lunch last week, to talk about his fantastic first novel, The Dog Stars, which our editors picked as one of our Best Books of the Month for August. Peter's actually a much happier guy than he apears in the photo below, holding up the coaster we asked him to sign. (Peter's response, when I shared this mugshot with him: "Looks like I just knocked off a 7-11 and proud of it.") 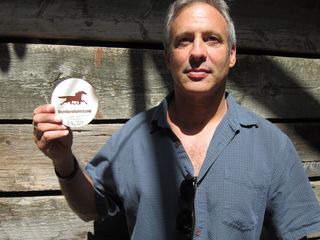 Scroll down to watch our video interview with Peter.

What’s the elevator pitch for The Dog Stars?

It’s about two guys who live at a little country airport—just a landing strip, some houses—nine years after a superflu kills 99% of people.  Hig sleeps under the stars every night with his dog Jasper, and every day they fly a patrol in Hig’s 1956 Cessna.  The other guy is a mean gun nut who showed up with a trailer full of guns and ammo.  That’s how it starts.

What’s on your bedside table and Kindle?

The Adventures and Misadvenures of Maqroll by Alvaro Mutis (it’s a modern day Don Quixote, just wonderful); an anthology of T’ang and Sung Dynasty poetry translated by Red Pine; and a teetering stack of other poetry—Eliot, Basho, Yeats, Jack Gilbert, Merwin.

Top 5 favorite books of all time?

Pablo Neruda, Selected Poems, the one edited by Kerrigan; Hemingway’s In Our Time; The Four Quartets by Eliot; Huck Finn; One Hundred More Poems from the Chinese, translated by Kenneth Rexroth.  For extra credit: The Bible.  You can’t beat the poetry and the stories.

Book that changed your life, was so important, made you want to be a writer?

I read In Our Time when I was eleven.  Holy @^!#!  I wanted to ski with a buddy like that, and fish like that, and camp in the ferns and make cowboy coffee and be with a girl who could fish and row and was too good for me.  And I wanted to write about all of it—like that.  Damn.  I reread it once in a while, and it still holds the same power and makes me feel like a kid, that awe at how beautiful and painful life can be, and how transcendant when rendered by a great writer.  Whew.

What’s your most memorable author moment?

That’s easy.  I was flying my little Cessna back from a week fishing with an old friend in Northern Montana last October.  The aspen were gold on the ridges, the red sun was just rising over the Rattlesnakes and my phone rang.  I could feel the vibration in my pocket.  I pulled it out and stuck it in between my ear and my headset.  The voice on the other end had to yell.  It said, “Knopf loves The Dog Stars!  They want to buy it!”  It was my agent in Manhattan.  I let out a rebel yell.  My first novel.  Knopf.  I pushed on the yoke and lost like five hundred feet in sheer exuberance.

I’d like to sing.  Sing like Elvis.  Like Etta James.  Raise goosebumps.  Always wanted to.  We have a joke in our family: The Heller Family Singers.  Want to empty out an entire county in like ten minutes?

What are you obsessed with, stressed about, psyched about now?

I love the sea.  I just want to be near it, in it.  Why I love to surf.  Catching the wave is just cream.  I love being out on the water early in the morning with the turtles and dolphins and the sun rising.  Also to fish.  When I can’t go to the ocean I go to a little creek that flows out of a wilderness in western Colorado and spend the evening wading up it, casting, catching dinner if I’m lucky.  Smell the pines, the cold stones, maybe see a bear trundling up the bank or a kingfisher.

Sometimes I get stressed because I can’t spend enough time with the people I love, Mom, the nieces, sister, Pop, Pa, the close friends that are like family, my wife.  I’d like to live five lives.  Also I pray that the fiction gods will be good to me and let me write something true and useful and maybe beautiful.

What’s your most prized possession?

A heavy, chipped, mustard colored mug Nancy made for us when Kim and I got married.  Nancy was one of my dearest friends and she died way too young.  I drink my coffee out of it every morning and it has like a ceremonial, almost sacred weight.  It reminds me of generosity and loving without expectation, trying to do that.

You know, I could just never get over Pablo Neruda.  The bigness, the warmth, the fun of it.  If you mean crush like romantic crush, it would be Beryl Markham.  West with the Night floored me.

I’m working on two books of poetry—one a long narrative poem, and the other a group of poems told in several voices at once, kind of choral.  And I’m halfway through the next novel.  Once you start making it all up there’s no going back.  You realize that as a non-fiction writer and a journalist, that’s what you really wanted to do all along.

How I Wrote It: Peter Heller, author of "The Dog Stars" from Amazon Books on Vimeo.