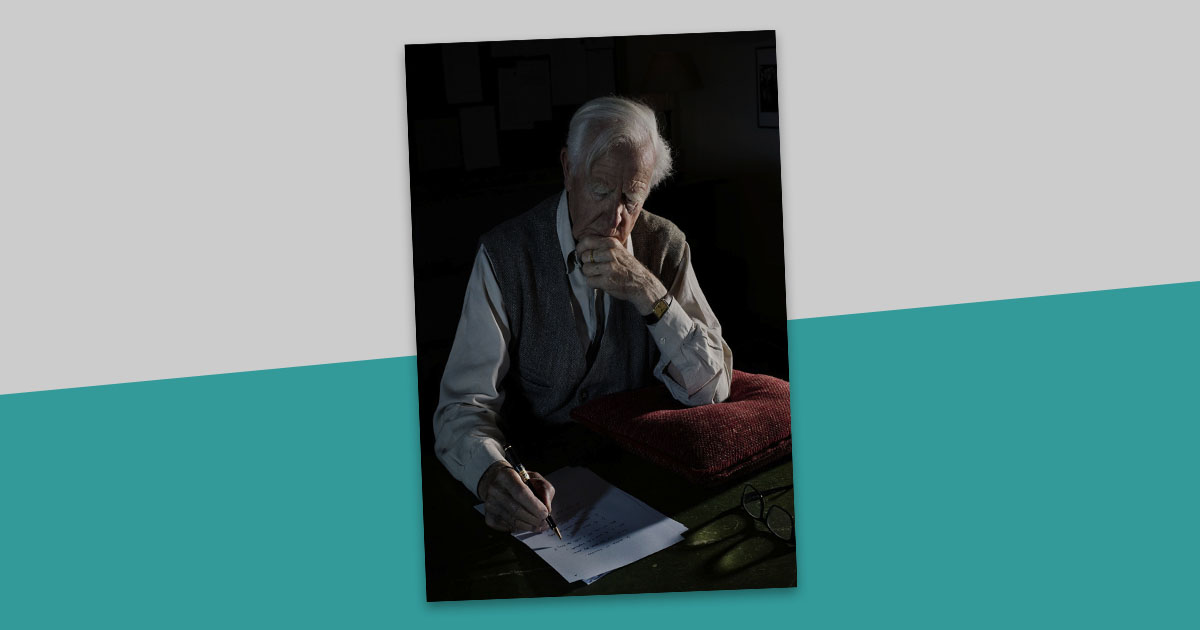 Author John le Carré, the writer his UK publisher calls "the great chronicler of our age," passed away of pneumonia at the Royal Cornwall Hospital on Saturday night, December 12, at the age of 89.

John le Carré was born David John Moore Cornwell on October 19, 1931, in Dorset, England, to Olive and Ronnie Cornwell. Olive abandoned the family when her son was five, and le Carré's relationship with his father was fraught, but according to one of his biographers, in it was sown the seeds of his fascination with secrets.

An unrepentant con-man, the senior Cornwell even rooked his own widowed mother out of her life's savings, according to his son. His run-ins with the law landed him in English prisons for years at a time while le Carré was still a boy. Later, he graduated to more exotic prison locations—if shorter sentences, of days or weeks—in Hong Kong, Singapore, Jakarta, and Zurich. It was due to his father's waywardness that le Carré remarked in his memoir, “Evasion and deception were the necessary weapons of my childhood…When the secret world came to claim me, it felt like a coming home.”

In 1950, he joined the Intelligence Corps of the British Army, and after a two-year stint working as a German language interrogator in Austria, he returned to England to study at Lincoln College, Oxford. There, he worked for MI5, also known as the Security Service, or domestic counter-intelligence, keeping an eye on far-left groups among the student body.

After graduating, he began teaching at Eton, an experience that provided another rich seam of writing material. He told The Paris Review, "Eton is a place of extremes, and these were good for me as a writer. The English upper classes can be seen at their best and worst. The good pupils are often brilliant, and they keep you on your toes and take you to the limits of your knowledge. The worst pupils provide a unique insight into the criminal mind. On all these counts my time at Eton provided me with riches." After a couple of years teaching at Eton, he became an MI5 officer in 1958.

Encouraged by a mentor at MI5, Lord Clanmorris (who wrote thrillers under the pen name John Bingham), le Carré—still known as David Cornwell—began to write his first novel. The character of George Smiley was inspired in part by Lord Clanmorris, but also by Vivian H. H. Green, a priest, author, and historian, who was a Fellow and Rector of Lincoln College, Oxford. As an intelligence officer, le Carré was prohibited from publishing under his own name, so his then-agent suggested a British, upper-crust-sounding, double-barrel surname: Chunk-Smith. But on the bus home, somewhere between his agent's office and his house, he thought of the name le Carré. Years later he was unable to remember where, what, or who inspired the moniker, but inspired it was.

John le Carré was not the first British intelligence officer turned espionage writer. He wasn't even the second. But if Ian Fleming—then the most successful writer/spy—inspired le Carré, it was to portray the intelligence world in a completely different way. "When I first began writing, Ian Fleming was riding high and the picture of the spy was that of a character who could have affairs with women, drive a fast car, who used gadgetry and gimmickry to escape." Instead of Fleming's fast cars, fast women, and gadgets, le Carré depicted a world of gloomy, middle-aged, not-so-civil servants.

His first novel, Call for the Dead (1961), was successful, though it wouldn't be until the release of his third novel, The Spy Who Came in from the Cold (1963), that he enjoyed an international best seller. By then, le Carré had transferred to MI6, the Foreign Intelligence service. He resigned from the Service in 1964, the year after the Cambridge Five scandal, which revealed that Kim Philby—MI6’s former head of counter-intelligence—had been a double agent since 1937 and had shared the identities of British agents with the KGB.

Luckily, le Carré's plan B was a full-time career as a novelist, made possible by the success of The Spy Who Came in from the Cold. And it was incredibly successful. As the central character in five of le Carré’s novels, and a supporting character in four more, spy George Smiley—the foil to James Bond—was le Carré’s most perfect creation. Embodied to perfection by Sir Alec Guinness on the big screen, Smiley was short, tubby, balding, owl-eyed, and dowdy, a mild-mannered man treated with contempt by his unfaithful wife. But he was also a cunning chameleon whose superpower was letting others underestimate him, often to their detriment.

After the Cold War ended, people would ask what he had left to write about. Plenty, as it turned out; his later novels incorporated timely themes such as terrorism (The Little Drummer Girl, 1983), international arms dealing (The Night Manager, 1993), corruption (The Constant Gardener, 2001), and money laundering (Our Kind of Traitor, 2010). He had best sellers top the charts in each decade, with 2019's Agent Running in the Field his most recent. And successful movie adaptations of his novels only drove book sales higher.

The theme of living in the shadows that recurred in his books became a hallmark of his private life, too. He lived quietly, mostly in Cornwall, shunning the spotlight that most other authors actively sought, though for unique reasons. He turned down a knighthood, telling 60 Minutes, "In my own country, I'm so suspicious of the literary world that I don't want its accolades. And least of all do I want to be called Commander of the British Empire, or any other thing of the British Empire. I find it emetic. I don't want to posture as somebody who's been honored by the state and must therefore, somehow, conform with the state. And I don't want to wear the armor."

Such was his penchant for privacy that there was surprise when he published his memoir The Pigeon Tunnel in 2016. But in it, he perfectly described both his personal history and the arc of his gift for what he called "scribbling." "Out of the secret world I once knew, I have tried to make a theatre for the larger worlds we inhabit. First comes the imagining, then the search for reality. Then back to the imagining, and to the desk where I'm sitting now."