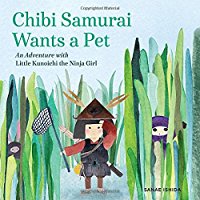 Sanae Ishida is the author and illustrator of Chibi Samurai Wants a Pet and Little Kunoichi the Ninja Girl and I'm a huge fan of her artistic style.  Ishida's illustrations are done using origami paper which she layers and then enhances with digital painting later.  In her latest book Ishida let her imagination run wild as Chibi Samurai searches for the perfect pet--will it be a creature from Japanese folklore or an animal like his ninja girl pal Kunoichi's bunny?

Below is a stop action animated short that Ishida created for Chibi Samulari Wants a Pet.  I think it expresses the fun and joyfulness of the book beautifully.  And...I just really love stop motion animation.  Below the clip Ishida shares the creation process which provides a fascinating look into this art form.

The idea of a stop motion video for Chibi Samurai Wants a Pet happened over a delicious cup of coffee. I was catching up with my friend Rachel at one of those rather hipster cafes in Seattle a few months ago, and she was telling me about her recent foray into stop motion animation.  “Let’s do one for your book!” she suggested, and just like that, I was all in.

Making a stop motion animation, it turns out, is very straightforward. This may have had to do with the fact that I had almost everything we needed already, but these days you can create a stop motion video in minutes if you have a phone and an app. Rachel (who is a professional props stylist) and I took it a bit further, however. Here’s what we used:

We’d decided that we wanted to keep the animation about 30 seconds and it was a good challenge to figure out a way to convey the gist of the story without revealing everything. I knew that I wanted Chibi Samurai to search for a pet, and I wanted the plants and characters to grow from the ground to look like the cover of the book. Beyond that, I was open to anything! After a brief discussion with Rachel, I created a rough storyboard: 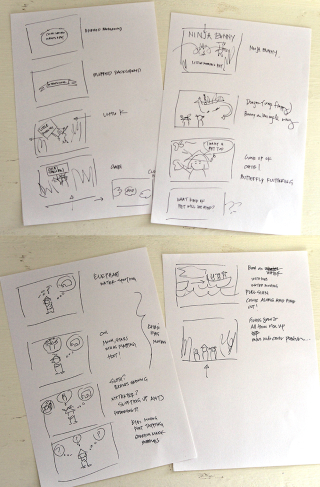 Then, I printed out elements from the book, and also painted, scanned and printed additional elements that I needed (e.g. the animals that aren’t featured in the book, water, and boat).

I had a cutting party with a few folks willing to sacrifice a few hours – my 11-year-old daughter was a rock star – and snipped out the characters and pieces for the animation. To keep everything organized, I used plastic baggies to separate out the scenes, storing the necessary pieces in each scene baggie. 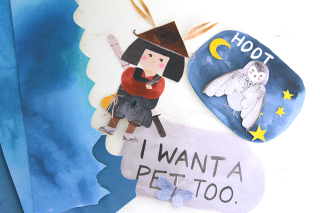 Stop motion animation has been around forever and couldn’t be simpler, albeit time-consuming. Using various adhesives and fishing wire, Rachel employed her considerable skills to make objects flip, fly and grow incrementally, while the camera snapped photo after photo. Tethering made our lives about a million times easier since we could immediately see the images via Lightroom in full size – it’s hard to catch all the details when squinting at the small camera screen.

We ended up filming for three days for approximately 4 hours per day (“We can do the whole thing in a couple of hours, right?” I said during the storyboard phase. Ha!). The total photo count came out to about 600, though I ended up using 400 or so. This yielded enough images for a 40 second video. The cherry on top was finding a royalty-free upbeat tune featuring the koto (Japanese harp) and shamisen (Japanese lute), which was perfect! 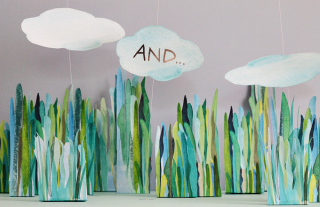 The photo editing was also a time hog, though not at all difficult. I’m going to guesstimate that photo editing took about 15 to 20 hours. Once the photos were ready to go, the video creation was easy-peasy. I simply imported them into a software called Smoovie, added the music, and tweaked the frame-per-second numbers and ta-da! An adorable stop motion video! My favorite part is the little boat scene, and I made a separate clip of it here, just because I love it so. 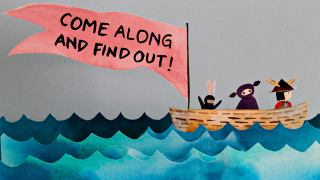 It was so much fun to make this video, I’m already plotting to try my hand at a more elaborate one next time!  --Sanae Ishida 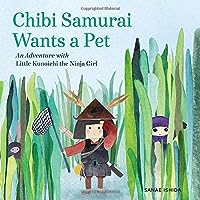