Trend Stetting 18: Get the Lederer Out 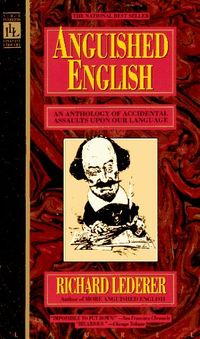 Born to an English mom and an academic dad, I was raised in the tradition of intellectual absurdist humor perfected by the likes of Beyond the Fringe, Flanders and Swann, and Monty Python. America falls depressingly short of modern equivalents in TV land (maybe if Jon Stewart wrote for 30 Rock? And it stayed on the air?), and most new books about language that try to be funny wind up on the novelty shelf.

Thank goodness for Richard Lederer. During his heyday in the 1990s—when this young Trend Stetter was chomping her way through the library at alarming speeds—Lederer wrote one of our most entertaining books about the quirks and foibles of the English language. A couple of decades later, his Anguished English is still the dog-eared paperback I'm most likely to pull off the shelf and wave around during a dinner party. (In fact, I recently did; hence this column.) Its finest chapter, "The World According to Student Bloopers," kills me every single time: As one teen scholar explains about ancient Egypt, "The climate of the Sarah is such that the inhabitants have to live elsewhere, so certain areas of the dessert are cultivated by irritation." Is our children learning?

Dr. Lederer, bless his puntastic heart, wrote several other books that also make me nostalgic for the literary comedy of yore. Favorites include Get Thee to a Punnery and Crazy English, which shamed my proud memorization of "antidisestablishmentarianism" (dying to tell you I just spelled that without looking it up) by showing off words that were twice, three times, ten times as long! It blew my mind. In case yours hasn't exploded yet, consider that "hippopotomonstrosesquipidalian" has no function in this entire universe except to mean "pertaining to a very long word." If you don't think that's awesome, we probably can't be friends.

Summer is officially here, word fans. Maybe instead of lugging a blockbuster hardback or a tiny screen full of crappy reality shows on vacation, you'll stash some classic language humor in your beach bag. I promise your next dinner party will thank you.