Working for the Queen of Spies: Kate Quinn and Stephanie Dray Discuss "The Alice Network" 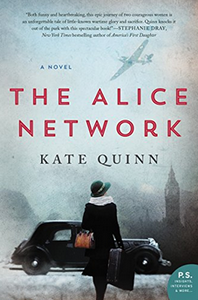 A Best of the Month pick in the literature category, and one of the most popular book club reads this summer is Kate Quinn's historical novel, The Alice Network. Here, friend and fellow author Stephanie Dray asks about the unique espionage group that inspired the story, both women espouse the creative virtues of writing at Panera, and Quinn claims that actress Cate Blanchett can be "scruffed-up" (I'm dubious. The woman could rock a garbage bag at the Oscars).

Stephanie Dray: Kate Quinn and I first met over a miscommunicated cover quote and a mutual admiration for each other’s writing. Now we’re critique partners and dear friends who can regularly be found at our local Panera on writing dates, red-penning rough drafts and scaring passing waiters with our cheery discussions of ancient world poisons and colonial battle wounds. I read and loved The Alice Network in its earliest draft, and I’m delighted to see it launch--congratulations, Kate!

Kate Quinn: Thanks! I definitely couldn’t have done it without my favorite critique partner.

SD: The Alice Network is based on a real spy network that operated in German-occupied France during the First World War, and features some actual historical figures. How did you learn about this piece of WWI history, and how did you go about doing your research for the book?

KQ: I read “Women Heroes of World War I” (Kathryn J. Atwood) and was absolutely astonished. When we imagine women serving in the First World War, mostly we think of Red Cross nurses, but here I was reading about women serving as front-line soldiers, women serving as war journalists . . . and women who worked undercover as spies. There were a hundred stories begging to be told, but ultimately it was the Alice Network—a ring of agents, many of them female, run by a petite Frenchwoman whose skill and success earned her the nickname “The Queen of Spies”—which really caught my imagination. I read everything I could get my hands on about the network, including a memoir published after the war by one of the network leaders; very helpful in providing first-hand memories. I was also lucky enough to work with modern-day descendants of a French family who very probably worked for the Queen of Spies, and whose vivid wartime letters survive to this day.

SD: We all love your past books set in ancient Rome and the Renaissance, but what made you decide to set a book in the 20th century?

KQ: I know you remember this decision, because you were there when I made it! We were sitting in Panera on a writing day, sipping lukewarm coffee and pondering recent trends in historical fiction, including the recent boom in 20th century war stories. When I came away from that conversation, I combed through the last century for inspiration. The question was “Can you love a new and different era?” and the answer was an emphatic “Yes!” I love 20th century history, and once The Alice Network bloomed into a full-fledged story in my mind, it absolutely demanded to be written.

SD: One of the most enjoyable aspects of The Alice Network is how the story moves back and forth between World War I and post-World War II, alternating between the viewpoints of dual heroines Charlie and Eve. How did you manage to weave these stories together so seamlessly when they involve such very different women?

KQ: I loved writing both Charlie and Eve, and their voices came easily to me. They begin their story as two women on opposite sides of a wide divide: different nationalities, different ages, different social standings; the only thing they have in common is an enemy. But circumstances force them together, and slowly they realize that each has something to learn from the other—and that only united can they take their common enemy down. Fundamentally The Alice Network is a story about female friendship and the tremendous things women can accomplish together—it's a long journey for Charlie and Eve, and I knew that journey would be more powerful if they started out far, far apart.

SD: This is always a fun game – if you had to choose the cast for a movie version of The Alice Network, who would you cast and why?

KQ: Ooooh, that is fun! (And for the record, this is also the kind of thing we end up talking about at Panera on writing days when the words aren’t flowing and we’re both procrastinating…)

A scruffed-up Cate Blanchett for the older Eve, rawboned and imperious. Ksenia Solo (Peggy Shippen in “Turn”) for Charlie, all belligerent jutting chin and sharp elbows. Mia Wasikowska (Jane Eyre) for the younger Eve; she looks very young and doe-eyed but there's a core of steel there. Mads Mikkelson in one of his suave Hannibal Lecter suits to play Rene, my urbane French villain. And Michiel Huisman (Daario in “Game of Thrones”) with a Scottish accent to play Eve's ex-convict driver-with-a-heart-of-gold!

SD: Can you tell us what you’re working on next?

KQ: I'm working on another dual timeline story focused around World War II. It involves a hunt for Nazi war criminals in post-war America, and the incredible true story of the female Russian bomber pilots known as the Night Witches...