Checking in on YA Titles: Gwenda Bond's Picks 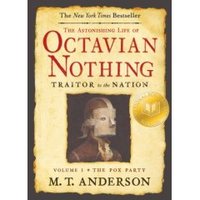 Shaken & Stirred, run by Gwenda Bond, is one of the most literate and interesting blogs out there. Especially in the last couple of years, it has also been of great use for those interested in Young Adult fiction. Bond is a bit of an expert on the subject--in addition to writing for Publishers Weekly, the Washington Post, Kirkus, and Strange Horizons, she is working on a young adult novel and pursuing an MFA in Writing for Children and Young Adults at Vermont College. She also writes an advice column for Lady Churchill's Rosebud Wristlet as everyone's Dear Aunt Gwenda. You can read much of her published work online for free (or buy some in print if you'd rather).

I recently interviewed Bond about current and classic YA. Bond is an enthusiastic advocate for the form: "The great thing about YA--and children's literature, in general--is that genre divisions are a lot less set in many ways. All the books are in the same section of the bookstore, with the exception that series books are generally broken out on their own. I believe that the overall level of quality in YA is higher than in adult books--perhaps because less is published--and so I'd encourage a person to just wander the section and take a chance on something that piques their interest."

She also notes that "like any category, there's a pretty wide range of things being published in YA. As a marketing category, it's broad (which is a strength, I think, as noted above). While there are the ever-popular titles in the Gossip Girl series and [others], one of the things that really sets YA and children's lit apart is the influence of librarians and other gatekeepers. Librarians are able to champion literary books, that kids can and do love, and parlay that into real attention. There's a built-in checks and balances system that actually plays a role in what gets read. You can argue that adult genres have this to, but I don't think it's to the same extent and certainly not necessarily resulting in the same type of sales."

On Personal Favorites for Adults who Haven't Dipped into YA
Ysabeau Wilce's Flora Segunda is one of the most adventurous linguistic debuts of the past few years; she's doing something highly original and highly enjoyable (two things which don't always go together). Likewise, Elizabeth Knox's Dreamhunter Duet is great, epic, political fantasy that absolutely crosses over for adults (there are as many--perhaps more--adult characters than young ones), and similarly Megan Whalen Turner's series books--The Thief, The Queen of Attolia, and The King of Attolia--are fabulous. Everyone should read the His Dark Materials series from Philip Pullman, which sort of goes without saying (but I'll say it anyway). My pal Justine Larbalestier's Magic or Madness trilogy is excellent fun, and her forthcoming How To Ditch Your Fairy is delightful and seriously smart. In science fiction, Justine's other half Scott Westerfeld has been writing the super-sharp Uglies books (and now Extras), and there's also Susan Beth Pfeffer's Life As We Knew It, about what happens in life of a teenager and her family when the Moon's thrown out of orbit and society breaks down. Oh, and even more recent, there's Adam Rex's The True Meaning of Smekday--that rarest of things: Optimistic science fiction that also has a brain!

[In terms of non-genre YA,] Cecil Castellucci's novels are perfect, tight reads; Coe Booth's Tyrell is fabulous; Peter Cameron's Someday This Pain Will Be Useful to You is an affecting post-9/11 novel; John Green's An Abundance of Katherines is like shorter, happier David Foster Wallace; and M.T. Anderson's Octavian Nothing: Traitor to the Nation: The Pox Party (the sequel's due out later this year) is nothing short of a masterpiece that everybody should read.

In addition, please, please do yourself a favor and read this lovely short realistic novel called The Red Shoe by Ursula Dubosarsky. It follows three girls in an Australian family unknowingly living next to a famous defector during the Cold War era. I also recently got around to National Book Award nominee Skin Hunger: A Resurrection of Magic by Kathleen Duey and found it jawdroppingly good--I defy anyone to name a wizard school this brutal, with a real villain, and no sentimentality in sight. Shaun Tan's The Arrival, it must be said again, is the book of the year, and I'm sad it hasn't gotten more awards recognition. It was a really strong year across the field, and you could do a lot worse than sampling any of the major award books.

On Upcoming YA Titles
I just finished an advance copy of Jenny Davidson's The Explosionist, out in July, an alternate history set in 1930s Edinburgh featuring many of the things I love best in novels, like odd technology and spiritualism. It's amazing. Susan Beth Pfeffer also has a sequel coming out in June to the book I mentioned earlier called the dead & the gone, this time out showing us a kid in NYC during the same events; it's as good as its predecessor. And another sequel I can't wait for is Ysabeau Wilce's second Flora novel, which I think is due this spring. I'm also really looking forward to David Schwartz's Superpowers--for adults, but with a cover like that, it's got crossover appeal written all over it. And looking ahead a bit, Kelly Link's Pretty Monsters, a collection of her YA stories featuring a new one bearing the name of the collection, comes out in fall and I can't wait to see how teens and the field react to it. I suspect both will love it, based on the reception of Margo Lanagan's stories (and Lanagan's first novel published here comes out this fall too!).

We'll check in with Bond in the fall for more recommendations and news on YA.