Against Eternal Provincialism: An Interview with Aleksandar Hemon 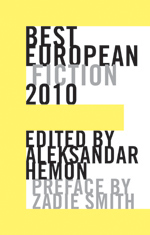 As the editor of the Best European Fiction 2010, his task was to give American readers a taste of what they are missing by not reading (mostly due to lack of available translations) the diverse, entertaining, and innovative literature coming out of Finland, Estonia, Hungary, Lithuania... really, countries all over Europe.

Reading these 35 writers, from 30 countries, was invigorating--and intimidating (so many new people to read!). This expansive volume is more than a literary sampler from the field of contemporary writing on the other side of the Atlantic, it's a jumping off point to fictional possibility. A few favorites to give you a sense of the range: Jean-Philippe Toussaint's musings on Zidane's infamous head-butt; Elo Viiding's subtle trashing of Western women, poets who visit the narrator's Soviet intellectual family in the early '80s; and Cosmin Manolache's list of the "Three Hundred Cups," imagined toasts of two cosmonauts (things they might raise a cup to), starting with the cup of banality and ending with the cup of beginnings. It's essential reading for anyone who wants a broader sense of what's happening in fiction today. 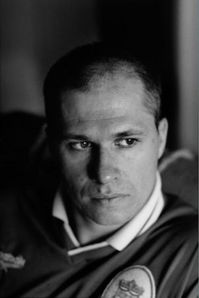 Hemon answered my questions about the project:

Amazon.com: In a recent interview with the Paper Cuts blog, you said: "I think American literature is crippled by the shortage of available translations." Do you mean that the body of literature available to us as readers is incomplete, or also that American literature as an art form is not developing as fully as it should because emerging writers are not reading widely enough?

Aleksandar Hemon: Both. Literatures, cultures, writers need to communicate among themselves, to reach for and explore what might seemingly be outside their experience.

Amazon.com: In your introduction to the anthology, you expressed an urgency for translation to keep up with the "rapid developments in European literature." What are some of these developments, and do you see them happening more rapidly in Europe than in America?

Hemon: Europe is a rapidly changing place, on every level. Immigration, post-communist transitions, the unification, steady presence of war and conflict, the inescapable challenges to the notion of national literature/culture--it all exerts pressure upon writers who must be aware of the transformational possibilities of the situation.

Amazon.com: In your mind, what needs to happen in order to get more of this writing translated, so it can be more readily available to American readers?

Hemon: You cannot wait for the mainstream publishing to snap out of their profit dreams, which have recently turned to nightmares. There has to be a kind of grassroots push, a movement, as it were, against the inherent isolationism of American capitalism as practiced in the publishing industry. There need to be grants and government support and a few publishers, mainstream and independent, who are not afraid to challenge American readership. We need to build a network of translators, publishers and readers. We hope that our annual anthology might provide an upsurge in interest for European fiction and then, as we publish it every year, become a habit to many readers.

Amazon.com: In your introduction, you also talk about Europe as "a fragmented place that always strives toward some form of integration." How do you see this playing out in the literature that's being written now?

Hemon: You can see the diversity that pieces in the anthology represent, and then the interconnections--obvious and less obvious--between various stories or between various modes of storytelling. Diversity generates need for conversation, conversation generates common interests, as well as differences. Literature, as a human project, is all about that.

Amazon.com: Do you get a sense of an emerging or existing "European" voice or aesthetic?

Hemon: No, other than the democratic multitude of voices.

Amazon.com: As a European-born writer who lives in America, do you feel a sense of responsibility to put American readers in touch with European writers?

Hemon: Yes. But there is also a personal need. My books have been published all over Europe. They read me there, and I want to read them back. I also spend a lot of time in Europe, often meeting writers, and I'm sick of apologizing for the embarrassing shortage of translations in America.

Amazon.com: This is such a diverse collection, in both style and subject matter. Did you have a sense of how diverse and vibrant contemporary European literature was prior to editing this volume? How much did a desire to showcase this diversity guide your selections?

Hemon: Yes. I was aware. Europe has never been a monolithic space, it contains a lot of people, a lot of languages and infinite supplies of history. I didn't need to do anything to showcase diversity. It is a condition of life and art in Europe, contained in every random sample.

Amazon.com: How much does country, language, or culture influence style? Did you find particular styles or influences to be more prevalent in some countries or regions vs. others?

Hemon: Every writer owes something to a particular tradition he/she grew up in. But no serious writer--other than the militantly nationalist ones--would reduce his/her domain of influence to a single tradition. Furthermore, historical breaks are so common and large in Europe that there are ruptures in every tradition which then connect the same generations across national borders. Younger Eastern European writers, for instance, have more in common with other writers of the same age in Europe, than with the previous, communist-era generations in their own countries.

Amazon.com: My biggest takeaway from this book, aside from many hours of enjoyable reading, is a huge list of authors whose work I now want to read. Did this happen to you, as well, or were you familiar with most of the writers before you worked on the anthology?

Hemon: I learned a lot editing this anthology. I knew a few writers by name, a couple I know personally, but most of the names in the book were new to me.

Amazon.com: What percentage of these stories or excerpts were translated specifically for this book? Did the anthology launch any further translation projects?

Hemon: Pretty much all of them. Moreover, for each published piece there were 3-4 translated ones, which are now circulating in various ways. The anthology in and of itself generates translations.

Amazon.com: For you, what was the most exciting outcome of this project?

Hemon: The project is already indelible. There is no way to go back from this point--the moment it was published the anthology became essential and necessary for American literary life. If the project, somehow, failed to live on, American literature and culture will be sentenced without parole to eternal provincialism.

Aleksandar Hemon is the author of Love and Obstacles (2009) and the National Book Award finalist The Lazarus Project (2008). He lives in Chicago.

Wrestling with the...
Read