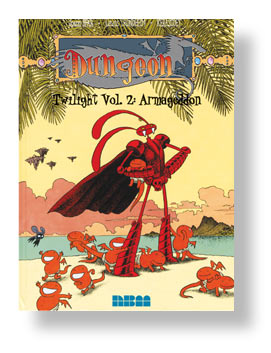 One of my great reading pleasures this decade has been the discovery of Dungeon in the lovely little volumes from NBM Publishing, which provides English translations of this near-iconic series originally released in France. This month, you could do worse than check out the whole series, as NBM is celebrating five years of Dungeon with the tenth volume, Zenith: Back in Style.

Dungeon is the brainchild of French geniuses Joann Sfar and Lewis Trondheim. Part of their brilliance in creating these books is to both send-up the heroic fantasy genre and provide one of the most compelling arguments for its relevance. The Dungeon books chronicle the adventures, trials (sometimes literally), and tribulations of the inhabitants of the titular dungeon, which is run by the Dungeon Keeper, an old bird with a thousand stories under his wing. Recurring characters include the heroic battle veteran Marvin the Dragon King, the sometimes foolish but always feisty Herbert the Timorous Duck--perpetually in love with the cat-like Princess Isis--and Marvin the Red, a crazy rabbit named after the dragon king, and clothed in what sometimes looks like atomic armor.

Each of these characters, and many supporting players, are fleshed out over the course of the series to an astounding degree. One masterstroke by Sfar and Trondheim in mapping out the narrative was to create different story “threads.” Thus, you get three main series--the dungeon’s Early Years, Zenith, and Twilight--with minor stories that still support the main narrative collected in the parallel series Monstres and Parade. Not only does this allow the creators, and a series of guest artists, to work on whatever parts of the narrative interest them at any particular time, it makes the effect truly three-dimensional. Further, you can, more or less, begin with any particular thread you want, and then read through the others--every point of entry creates a different experience of situation and character. 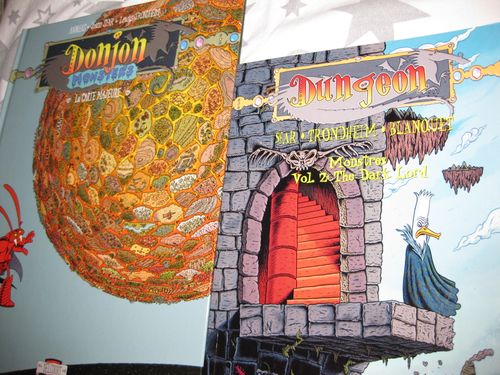 (On the left, the French edition of The Dark Lord. On the right, the English-language version.)

For example, if you start with the Dungeon Zenith series, you may have a view of the Keeper as a somewhat cold, jaded character. But, if you then backtrack to volume one of The Early Years, The Night Shift, you find a riveting, often tragic tale of how the Keeper came to run the dungeon, and your view of the character becomes much more charitable.

Another example? Marvin, the Dragon King, also known as the Dust King. Throughout the series, he’s a bedrock of everything that’s noble and reasonable and heroic in a recurring character, even with a few lapses. Marvin projects those qualities no matter where readers first encounter him. However, the Dungeon Twilight volumes one and two deepen and provide nuance to Marvin’s character. Indeed, the Zenith and Twilight volumes in particular contain some of the finest artwork, characterization, and storylines of any comic I’ve ever read. It’s rather remarkable that embedded within some excellent humor (and some of it slapstick, at that) readers will feel a real emotional connection to the characters, especially Marvin.

I’ve talked about story and character, but not about the art. Especially in the volumes created by Sfar and Trondheim alone, Dungeon features some of the most imaginative and beautiful art in fantasy comics. There’s a clarity and sharpness--an ability to create diversity and complexity within panels without crowding or cluttering things--that reflects a mastery of composition. The art often recalls Bosch or Brueghel in its proliferation of cleverly drawn monsters. Some sequences are little short of miraculous. Twilight: Armageddon serves as a particularly outstanding example, especially when an entire planet splits into chunks. The audacious storytelling is matched by the art. Several times, I’d turn a page and just stare at the art before even continuing with the story.

Here’s the complete list of Dungeon titles for your enjoyment. (And a quick thank to NBM’s publicist, David Seidman, who’s been wonderful about helping get the word out on these books.) 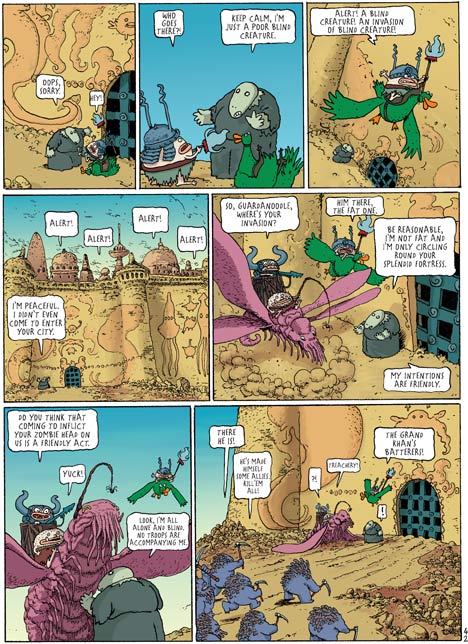 Vol. 1: The Night Shift – The Keeper’s idealistic early years are explored in this story of Machiavellian intrigue and betrayal. The Keeper becomes a kind of would-be super hero, defending justice in the city, only to come up against hard truths. One of the most complex tales in the series, morally ambiguous and at times heart-breaking.

Vol. 1: Duck Heart – The first book to properly introduce the main characters of the series, this wonderful mix of adventure and humor also has a truly awe-inspiring full-page panel of a summoned monster rumbling “I am absolute evil, and I hope you didn’t bother me for nothing.” As with all of the Sfar-Trondheim volumes, the panels are uncluttered yet full of precise detail. Marvin and Herbert take center stage.

Vol. 2: The Barbarian Princess – Herbert makes up a fictitious princess-in-distress to lure more adventurers to the dungeon, only to find she’s all too real. In addition to a great cast of Boschian monsters, there’s plenty of opportunity for humorous sequences and reversals of fortune. Marvin is not amused to have to come to Herbert’s rescue.

Vol. 3: Back in Style – A slick lawyer manages to take the title to the dungeon, meaning the Keeper, Marvin, and Herbert must travel with their monster troupe to Herbert’s home town to seek help. The complex and absurd legalese of the first half of the tale opens up into classic quest, as the monsters go on their own personal hegira. Complete with gladiator-training roosters and double-crossing dukes.

Vol. 1: Dragon Cemetery – The “twilight” of the dungeon also refers to the twilight of the world of Terra. In this series, Terra has stopped turning, creating a perpetual world of light and a perpetual world of darkness. A now-blind Marvin must undertake a harrowing quest to the graveyard of the dragons, accompanied by his namesake Marvin the Red, a manic rabbit knight. This volume is fairly dark, and among the most affecting in the series.

Vol. 2: Armageddon – After his experiences in the dragon cemetery, Marvin, renamed the Dust King, has become invincible, although it’s not a power he much wants. Setting out to discover the whereabouts of his son, he and Marvin the Red embark on a journey both apocalyptic and at times hilarious, while the planet of Terra disintegrates around them. Along with volume one of Twilight, Armageddon showcases the apparently limitless powers of Sfar and Trondheim.

Vol. 1: The Crying Giant – This minor volume consists of two stories, illustrated by Mazan and Jean-Christophe Menu. The first is entitled “John-John the Terror” and features an inn full of monsters and bird-adventurer that finds and exploits them. In the title story, “The Crying Giant,” the stolen giant’s eye that allows the Dungeon keepers to see far distances (like a crystal ball) is weeping, because the giant it belongs to is having a crisis of unrequited love. Throughout, there is a little less of the trademark wit that marks a Sfar-Trondheim collaboration. Still, both stories are above average.

Vol. 2: The Dark Lord – Taking place after the main Twilight series to date, this volume returns to the level of quality displayed by other volumes. The world is still in fragments, and Herbert has become a very powerfu,l and dark, lord. Marvin the Dust King and Marvin the Red both endeavor to find the map of this now completely changed world, as a way of curbing Herbert’s power. Guest artists Andreas and Stephane Blanquet do a great job of creating awe-inspiring landscapes and sometimes hilarious monsters.

Vol. 1: A Dungeon Too Many – Occurring between the first and second Zenith volumes, this story of a rival dungeon setting up next door to the Keeper’s dungeon has some side-splitting laugh-out-loud humor in it. Although it doesn’t strive for the emotional depth of some of the other volumes, it more than holds its own in terms of exquisite pacing and complexity of situation. As the two dungeons compete to attract adventurers, the stakes get higher and higher. Guest artist Manu Larcenet’s light, fluid style emulates the story in a pleasant way.

Vol. 2: Day of the Toads – Also occurring between the first and second Zenith volumes, “Day of the Toads” includes the title story (which is literally about a swarm of venomous toads) and a second tale in which Herbert is sent to clean out the dungeon’s septic tank. Although not up to the standard set by A Dungeon Too Many, readers will still appreciate the humor and some very good art by Manu Larcenet.

The original French editions are in a much larger format, as shown in this post, but I’m not convinced bigger is better. The NBM reproductions are excellent, and very readable. Sfar and Trondheim have threatened to produce over three hundred volumes by the time they’re done, but I’d be content just to have the next ten translated in, oh, I don’t know, the next six months. Short of that happening, I'll have to console myself by re-reading the existing ten...