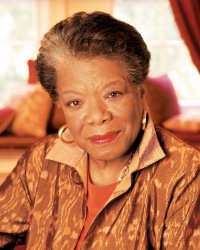 Maya Angelou, celebrated author of more than 30 books spanning poetry, essays, plays, novels, and a series of autobiographies, died Wednesday night, May 27, at the age of 86.

Born Marguerite Ann Johnson in St. Louis on April 4, 1928, Angelou experienced life fully and uniquely, working as a young woman in strip clubs, on a cable car, as an actress, and as a journalist. She wrote a series of seven autobiographies, beginning with perhaps her best known work, I Know Why the Caged Bird Sings (1969).

Though she never went to college, she held more than 30 honorary doctral degrees. She was a nominee for the Emmy Awards, Tony Awards, and the Pulitzer Prize; she was a winner of the Grammy Award and the National Medal of the Arts, among many other honors.

President Bill Clinton, who felt a connection with Angelou having also grown up poor in Arkansas, asked her to read at his 1993 inauguration, where she recited "On the Pulse of the Morning." A life-long civil rights activist and icon, she was awarded the Presidential Medal of Freedom by President Obama in 2011.