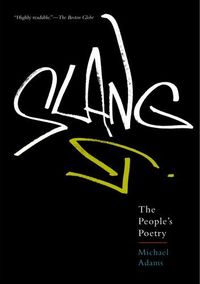 I didn’t go in for much slang as a kid, having had like drilled out of me by an academic dad and a serious reading habit centered on Agatha Christie, Sherlock Holmes, and Anne of Green Gables. Articulate companions all.

Then I spent the summer after high school in Berkeley, and by the time college rolled around I couldn’t make it through a sentence without nice, tight, and sweet (but never hella—even back then, it didn’t feel right to bend grammar quite that far). Eventually my older brother asked me to stop calling him bro, so he morphed into dude instead. I was hooked.

Why those words? And why that summer in that place? Michael Adams, an English professor at Indiana University, considers these questions and more in Slang: The People’s Poetry, out in paperback this week. First he helpfully outlines the distinction between slang and its kissing cousin, jargon. The latter tends to be homogenous across regions and interest groups: the casual restaurant terminology recognized by servers from Jersey to Oregon, for example, or the snowspeak familiar to boarders worldwide.

Slang, on the other hand, has direct links to “social, aesthetic, and linguistic knowledge,” as Adams explains: “It’s a language of being, not of vocation or avocation.” Slang isn’t language at work; it’s language at play. That said, it also does a fine job of demonstrating where we come from (and, in the case of my first Bay Area stint, where we’ve been). If I call it soda and you call it pop, we’ve learned a little something about each other.

Adams' take on Slang is a serious read, if not heavy-handed. You’ll find more hilarity on Urban Dictionary and other wiki-style sites that track the evolution of our twisted, effed-up, gnarly language. But the professor's thoughtful, thorough exploration of why we sling slang waxes much more, like, eloquent. For realz.