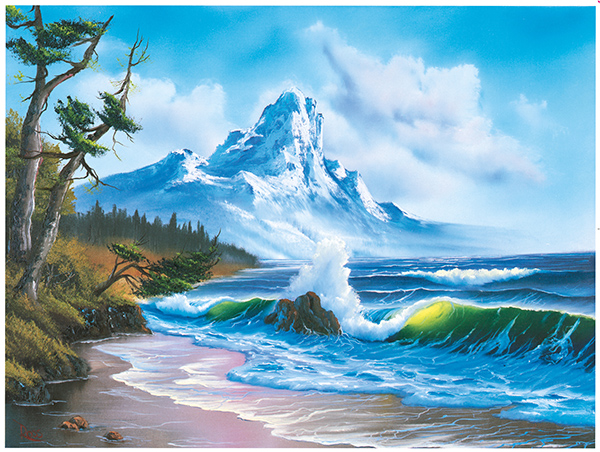 A certain despair comes with watching daytime television. I know this because I once had time to watch it. In those shiftless, after-school hours—old enough to move independently through the world, but young enough to avoid work—I'd cycle through the 13 channels on the knob of my 12-inch TV, snicking through the noise of insipid soap operas and inane talk-show chatter in search of one of my go-tos: M*A*S*H re-runs, The Carol Burnett Show, or Soccer Made in Germany. It was the '80s.

Occasionally, one program would grab my attention, remarkable not for what it was broadcasting, but what it was not. The Joy of Painting was an absence of distraction: In a dark studio, a lone man under a lenticular cap cloud of hair (mostly air) lightly dabbed a paintbrush against a canvas, whispering about "happy little trees," "happy accidents," and "laaazy" water. And like any vacuum, it sucked me in. It was the opposite of despair.

Some of my interest can be chalked up to bewilderment (Who, what is this?), but the appeal of Bob Ross emerges from a Zen otherness, a preternatural calm that negated my adolescent ironic detachment. It didn't matter that his paintings weren't high art, or that his landscapes sometimes challenged physical reality. Inscrutable light sources are common, while divergent climates mingle harmoniously (see: above). Colors uncommon to nature abound.

Never mind all of that; as he said, "You can move mountains, rivers, trees. You can determine what your world is like." Ross loved painting, and sharing that love was enough. Sadly, he passed in 1995, but not before producing more than 30,000 works, hundreds of which have been collected in Bob Ross: The Joy of Painting, alongside his trademark words of wisdom on art and life, and even a few tips for aspiring artists. Here are a few, along with friend and partner Joan Kowalski's introduction from the book.

Introduction to Bob Ross: The Joy of Painting

The uncommonness of Bob Ross is due in large part to the absence of anything extraordinary. Can that be said with complete confidence? You bet.

For over thirty-five years, we’ve all watched television’s favorite painter quietly develop into a global phenomenon, a virtual titan of blissful karma rooted in, well, the normal.

Maybe it’s not usually like that. People in the public eye might find their favored niche and then make adjustments this way and that in order to fit inside the determined profile. 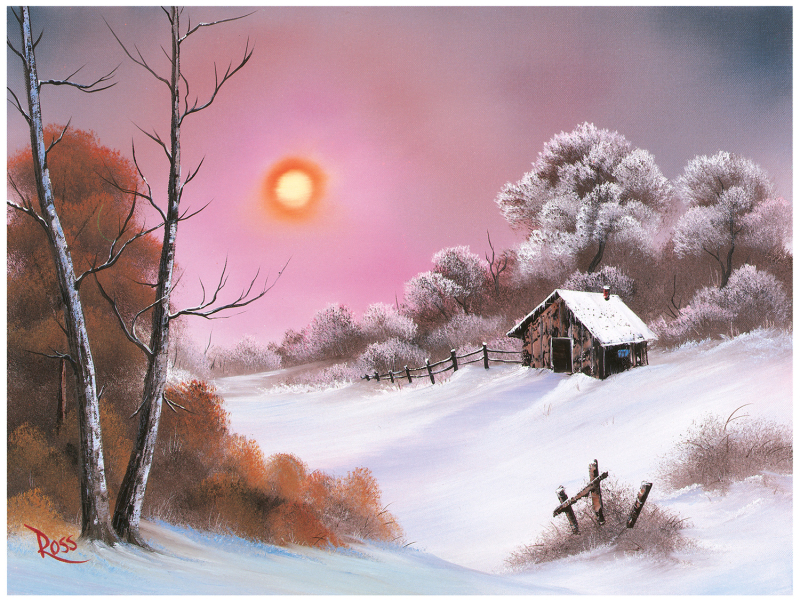 Bob went a different route. He knew his zazz-level was somewhere between watching paint dry and checking the mailbox, so he decided let’s just stay with that.

I met Bob Ross in 1983 when I graduated from college; my parents, Annette and Walt, were hurling themselves into this wholly unconventional project that would later become Bob Ross Incorporated. Bob’s wife, Jane, joined the crew, I jumped in soon after, and for the next dozen years Bob Ross did something absolutely mind-blowing, truly revolutionary, beyond measure. 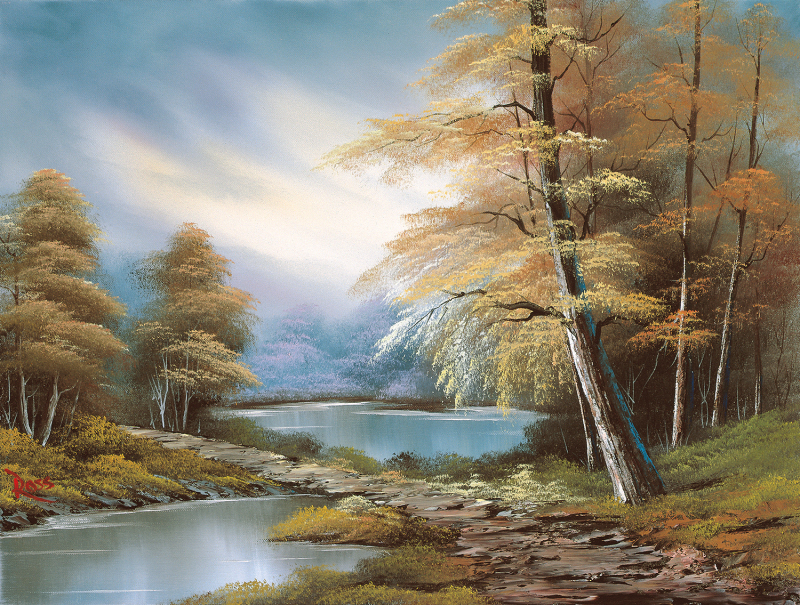 Our little company increased its efforts, twisting and turning to meet growing needs (product line, certified instructors, television episodes) as the size and appetite of The Joy of Painting audience flourished and Bob Ross continued to serve up his warm and delicious brand of ordinary. The recipe was magic.

“Let the knife touch,” Bob would say of painting mountains. “The canvas will pull off what [paint] it wants, give you back what’s left.” And in the same way, within those twenty-six glorious television minutes each week, in the intimate setting called home, everything Bob Ross fans wanted—nothing more, nothing less—was awarded. 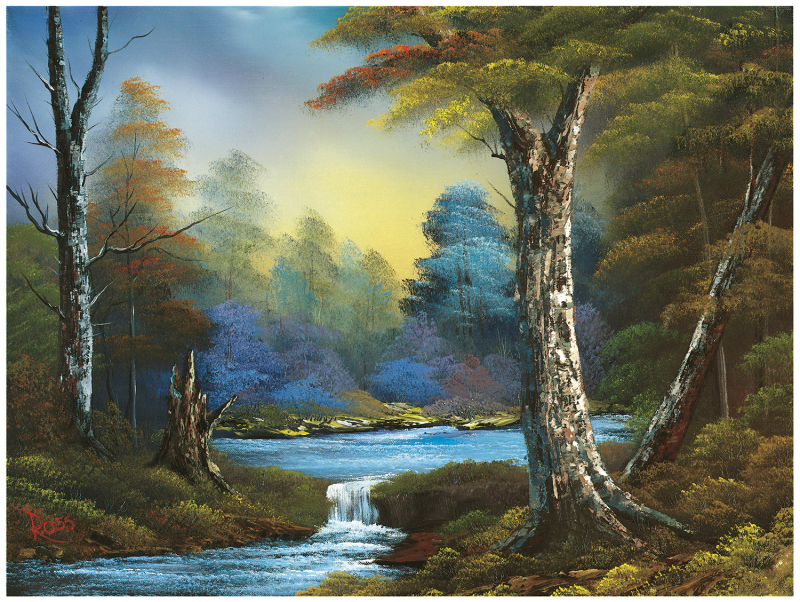 And what is left—what is on the other side of that black backdrop, that chill shirt and forever hairstyle, those genuine, recite-able sayings?

Like a firework that starts as a thin pure whistle, barely detectable, then bursts into glorious bigness, color and light, sparks just all over the place—an incredible world of brilliance that delighted and humbled the man who inspired it. 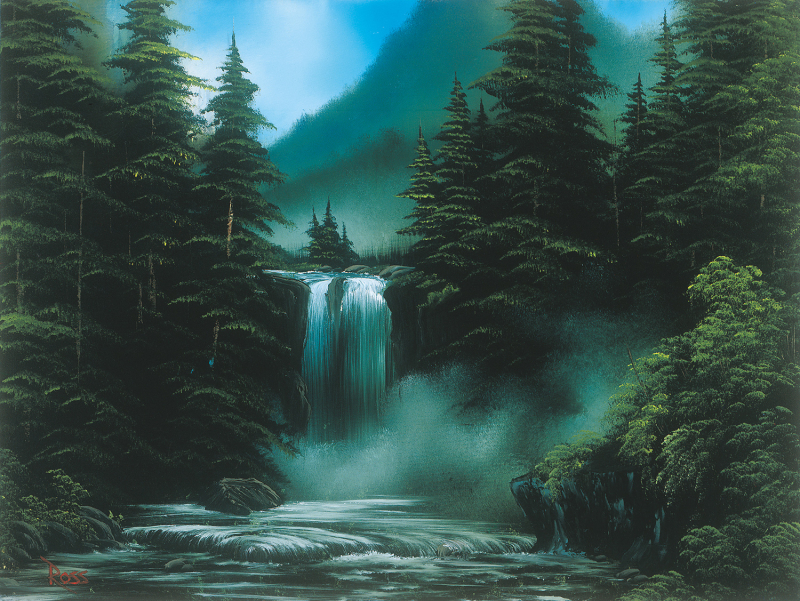 Spin the camera around 180 degrees and you’ll see every day what Bob Ross does for so many lives. He enhances relationships between parents and children, provides therapy for the weary, stimulates respect for nature and the environment. And he makes being creative a real thing for everyone—couch potatoes and the artistically ordained alike. His easy painting technique and that yep-I’m doing- this attitude is showing up everywhere.

When people ask me what I do, where I work, this is how it goes every time. I say, “Well, have you ever seen that guy on television, he paints mountains and trees, quiet voice, fuzzy hair—” And that’s all I ever say. Half of one sentence, that’s it. The rest is gleefully provided by the inquirer, and I don’t say another word. 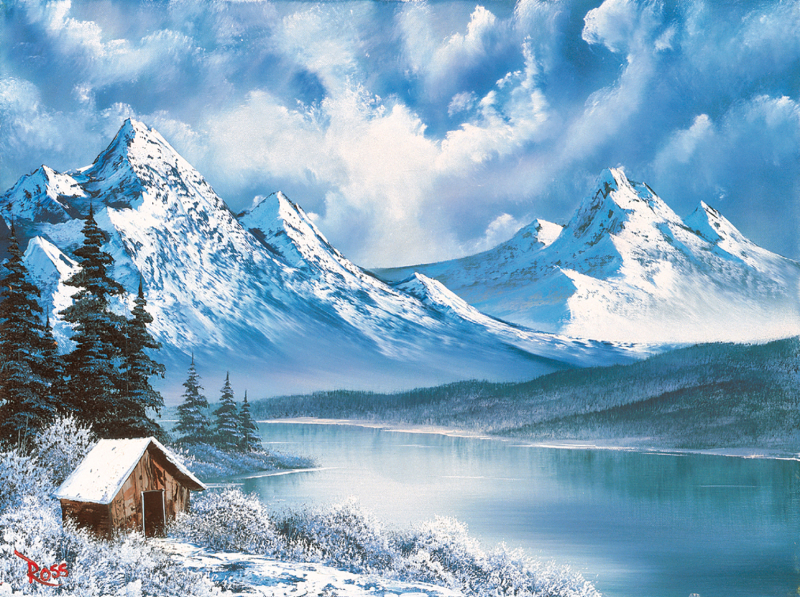 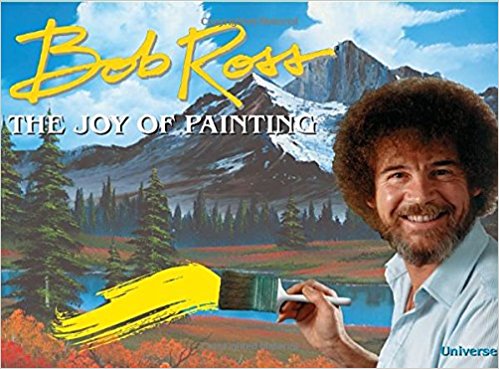