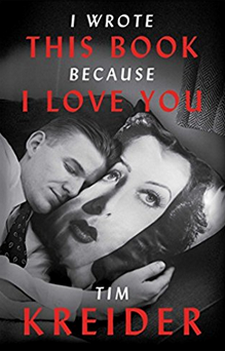 In this edition, a book to help you cure your commitment issues, an action/adventure to moon over, and inspiration to spur another Ice Bucket Challenge...

Jon Foro: Let’s lighten things up a bit. Or maybe it’s just me who needs to lighten up. Either way, I Wrote This Book Because I Love You—Tim Kreider’s collection of “formal letters of apology to everyone I’d ever dated”—is a strong bet to do the trick. Kreider’s smart-but-weird observations and brutal self-deprecation have earned him a diverse array of fans including Richard Russo, Charles Johnson, and the late, great David Foster Wallace. But it’s the comment at the bottom of the table of contents that sold me: “Note to Mom: do not read.”

Adrian Liang: The announcement this week of a newly discovered fossilized human jawbone has made scientists reconsider—and push back—the date that Homo sapiens initially migrated out of Africa…and made me think of one of my favorite nonfiction books of 2017, Adam Rutherford’s A Brief History of Everyone Who Ever Lived. Armed with his lively British wit, Rutherford delves into the migration, interbreeding and isolation, and extinction of various hominid branches that has shaped the modern human. It might sound dry, but it’s actually fascinating and often funny, as Rutherford punctures the claims of mail-in DNA tests and light “news” articles that dumb down our understanding of our roots instead of delighting in how messy and interwoven they actually are. But this weekend I’m going to look ahead at our possible future and finish up David Pedreira’s thrilling and twisty Gunpowder Moon (February 13). This Moon-set action-adventure is what I hoped Andy Weir’s Artemis would be, though with a wee bit less science and a lot more shooting. A mining crew on the surface of the Moon is attacked at first indirectly and then, fatally, directly by an unknown saboteur. Who is responsible? The Chinese, only a few hundred kilometers away? Or another country trying to deflect the blame on China as they sneak in to seize U.S. territory? The miners never signed up to be soldiers in a war on the Moon, but unless they can figure out what’s really going on, they’re going to be the next casualties in a power grab.

Erin Kodicek: I'm going to finish Every Note Played by Lisa Genova. Somewhere Reese Witherspoon is learning how to pretend to play the piano, because I can easily see her starring in a film adaptation of this tug-on-the-heart-strings novel (yo, Reese!). Genova is a neurologist as well as an author, and she uses her novels to teach people about diseases like Alzheimer’s (Still Alice), and, in this case, ALS. ‘Every Note’ features a philandering, ego-maniacal concert pianist, felled by this terrible illness, who then has to rely on his ex-wife--also a pianist--and estranged daughter to take care of him (cue forgiveness and redemption, for the ex-wife as well, who harbored a secret that contributed to the demise of their marriage). If you happened to participate in the infamous Ice Bucket Challenge, this novel will make you feel extra good about that. And it'll make you want to do even more to  eradicate this horrific disease.

Sarah Harrison Smith: This weekend I’ll be finishing up Xhenet Aliu’s debut novel, Brass, a sassy, assured mother-daughter romance that I just can’t put down. Brass is narrated, with a lot of attitude, by Elsie, a teenager in late 1960s, and her daughter Luljeta, who’s a teenager herself in the ‘80s. Aliu claims new fictional territory in the Albanian and Lithuanian communities of Waterbury, Connecticut, where Elsie and Luljeta live, long after “the last of the brass mills locked up their doors and hauled ass out of town once and for all.” Though the town is depressed, these two women are such determined, smart characters that you can’t help feeling heartened despite the troubles they face trying to move up in the world. No teaser this week: Random House published Brass on January 23, so you too can enjoy it right away.