S.G. Browne is rapidly becoming known for his ability to take the familiar and re-imagine it through the kinds of humor and satire that also allows for interesting characters. His latest is Fated, which Kirkus in a starred review calls "Another radically funny comedy from one of America's best satiric novelists."

What's it about? From Publishers Weekly: "Browne...unleashes the irresistible tale of Fabio Delucci, who's getting tired of his job as Fate. It's a grind, working the Fate Radar and the Fate Generator program and reporting to Jehovah--known here as Jerry--who believes Fate's work has grown sloppy. Even his no-contact romance with Destiny has become distinctly unfulfilling. Then he falls in forbidden love with human Sara Griffen, and once he reveals his true self to her, their relationship is drastically transformed, and, naturally, big consequences threaten to crush him. Fabio provides an appealing commentary on the hazards of immortality, the uncertainty of destiny, and the lengths people will go for love, all wrapped up in a cute, funny package."

And here's Browne in an Omnivoracious exclusive telling us more about the origins of the characters and situations... 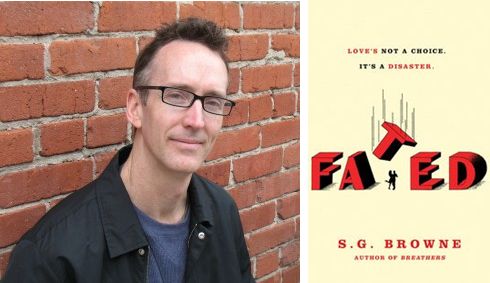 One of the questions I’ve been asked several times at my readings and signings since the launch of Fated has been a variation of:

Did I model my characters after the gods in Greek mythology?

I didn’t start writing Fated with the intention of channeling Zeus and Aphrodite and Dionysus. And I hadn’t thought about the possible influence before. But when I sit and think about it, I realize that even though I may not have consciously infused the characters in Fated with the attributes of the Greek gods, it’s possible that my familiarity with the mythology played a role.

A quick explanation before I continue:

Fated is a social satire about fate and destiny told from the point of view of Fate, who deals with the majority of the human race fated to live normal, mediocre lives. Or, more often than not, worse than mediocre.

He doesn’t get the Winston Churchills or the Michael Jordans or the Thomas Edisons of the world.

Destiny gets those. And she loves her job while Fate hates his. He’s like a government worker who can’t quit and who doesn’t have any opportunities for promotion. Meanwhile, Destiny enjoys shepherding her humans to fame and fortune and award-winning careers. This makes for a sullen and discouraged Fate, who also has a five-hundred-year-old grudge with Death and has regular lunch dates with Sloth and Gluttony.

In addition to Fate, Destiny, Death, and the Seven Deadly Sins, Fated is populated with numerous other personified concepts, including Karma, Lady Luck, Secrecy, Failure, Temptation, Honesty, Wisdom, and Love. Any emotion or attribute, any deadly sin or heavenly virtue, is an immortal creature with a specific job to do in relation to the human race.

The idea behind all of the different characters is that Fate and Destiny are not allowed to get involved in directing the lives of their humans but instead are charged with assigning the futures of their humans at birth and adjusting them accordingly along the way. Those adjustments are made in response to how their humans deal with the challenges thrown at them by the other characters in the book. After all, it’s the way in which humans deal with their luck or anger or temptation that ultimately determines their fate or destiny.

Which brings me back to the question about Greek gods. Much the way Zeus and Hera and Apollo and the rest of the Mount Olympus HOA often cavorted and connived and behaved inappropriately, the immortal characters in Fated exhibit rather human attributes. And they don’t perform their jobs with the wisdom and integrity and good judgment you’d expect from gods.

Of course, the characters in Fated aren’t gods, but they’re definitely flawed like their Greek cousins, with hang-ups and addictions and emotional baggage, not unlike the humans they’re in charge of overseeing. And to that extent, I think that’s what makes them, and the Greek gods, so appealing to me. They’re like us. They’re not some perfect example of enlightenment.

They’re narcissistic and paranoid and lazy.

They’re manic-depressive and passive-aggressive and lactose-intolerant.

They suffer from ADD and bulimia and alcoholism.

Although Fate and Destiny and the rest of the characters in Fated are immortal beings and have been around since before the first Neanderthal set himself on fire, they aren’t immune to human behavior. It’s kind of like what happens when someone moves to a new region with a different dialect or accent or way of living and they start talking and acting like the locals. After dealing with humans for tens of thousands of years, my immortals have taken on a lot of our less-than-desirable qualities. Which I think makes them even more appealing.

So yes, the gods of Greek mythology definitely had an influence on the immortal characters who populate the pages of Fated. And personally, I think that’s a good thing.