The book's birth, the TV show's adoption, and the new home of “The Expanse”

Both the Expanse books and its TV show have lots of fans. Count me and Jeff Bezos and a whole bunch of Amazonians among those fans, who have been waiting impatiently for season 4 to start on Friday, December 13. 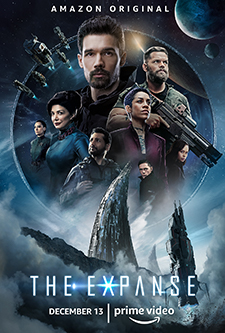 Showrunner Naren Shankar, the cast of The Expanse, and authors James S.A. Corey came to Amazon’s Seattle campus in March to talk about the books, the show’s roller-coaster-like revival, and (maybe) who lives and who dies. Take the last bit with a grain of salt—it was sometimes hard to tell when the authors were teasing the cast and when they were simply pretending to tease the cast. When book 9 arrives, we’ll all find out!

Here’s an excerpt from our interview:

Adrian Liang, Amazon Book Review: As the audience may or may or may not know, James S.A. Corey is two people. I don’t know how you split up who gets which half of the name…

Daniel Abraham: I’m the James half. He’s the Corey half.

Adrian: Got it. My understanding, Ty, is that The Expanse started as a role playing game.

Ty Franck: No, it didn’t. It actually started as a pitch for a video game. And then eventually evolved into a role playing game, and then books.

Adrian: So how did you and Daniel start working together on it?

Daniel: Well, there was this role playing game…. [Laughs] Ty moved to Albuquerque, which was my city, and was running a role playing game up in Santa Fe for the writing community up there. And I had a kid, and I couldn’t go. He agreed to run a smaller version of it in Albuquerque for me and him and our wives. And we played it three or four times before I said, “Dude, this should be a book.” And he didn’t know enough not to say no to that… It worked out pretty well.

Adrian: In the original video game/role playing game, were the three elements already there: Earth, Mars, and the Belters?

Adrian: How long did it take it to write the book together from “I think this is a good idea” to—

Daniel: Wednesdays. It was all Wednesdays. Ty had a day job, and his day off was Wednesday. We worked out the outline, and we’d get together Wednesday morning and outline the two chapters we were working on, and then get drafts of those, and swap, and each of us would edit the other guy’s work. And then after that we’d play Xbox.

Adrian: Book 8, Tiamat’s Wrath, released on Tuesday, March 26 [applause from the crowd]. Congratulations. And book 9 is the end of the series. Do you mentally know where it’s going to end up?

Adrian: Does the cast know where it’s going to end up?

Dominique Tipper (Naomi) [to the authors]: Don’t kill me please.

[Hoots, gasps from cast and audience]

Adrian: Now she’s going to be worried! They’re all going to be worried.... One of the great things about books is you can write in as much character backstory as you want. Hopefully you layer it in—it’s not just an info dump—but translating that to screen is hard. Is there a character that’s been hard to translate from book to screen?

Ty: Hard? There are some that are really easy. Like, Amos is super easy...

Daniel: I think the trickiest one is Holden. Steve has to deal with the character with the longest arc. It really is this one guy’s travel from where we meet him in book 1 to the end of book 9.

Adrian: Wait, you just gave away that he’s going to be in book 9.

Daniel: Having that slow-burn character arc is tricky to do when you’re doing it a season at a time. [To Steven Strait:] Sorry, dude. We did what we could.

Adrian: The TV show does not exactly follow the books. Season 1 is not book 1. Season 2 is not book 2. There is mixing back and forth. How do you make those decisions when you’re translating from book to season?

Ty: Well, you’re asking the wrong people. The guy who makes those decisions is sitting on that side. [Points to showrunner Naren Shankar.] But we always talk about it ahead of time. In season 1, Naren came in and he said, “Here is where I want to end season 1. Here’s how much of the book I want to do in season 2.” He had already planned it out. From that point on, it’s always been a conversation. For seasons 2 and 3, we had a lot of conversations about it. From early on, he said, “There’s a lot of story and we don’t want to rush through it.” And especially with the first book, which establishes the universe that the stories take place in and is so important to what happens after that. He didn’t want to push through that and leave the audience confused. Now that we’ve gotten past the world building, I think we can speed up a bit, which is a good thing. At the end of season 3, we’ve caught up to the end of book 3, so we get on a more traditional book-to-season kind of pace.

Adrian: Is there any character that originally, in the books, did not play as large a part, but then, based on reaction to the TV show—

Ty: You’re asking me that because I’m sitting next to her [Cara Gee, who plays Drummer]. [Clapping from the audience.] Drummer doesn’t make an appearance in the books until book 5. And it’s not a huge part. But we needed a character to be a second-in-command to Fred Johnson. And it was Daniel’s idea. He said, “Why don’t we just pull Drummer up?” So we put her in. And everybody liked her. And when we were looking for stuff to do with the Belter side that wasn’t on the ship, she was an obvious fit for that, so she ended up doing a lot more stuff.

Daniel: There were a lot of characters that we folded into Drummer. There are a bunch of folks from the books that you won’t see in the show because the function they perform—

Ty: Because Drummer ate them.

Daniel [laughs]: Because Drummer ate them all.

Cara Gee (Drummer): It’s going to be a one-woman show by season 9.

Adrian: What do say to people who’ve seen the TV show but haven’t read the books? How do you convince them to jump into reading the books?

Adrian: [Laughs] You should.

Wes Chatham (Amos): Ty describes the show as a really expensive commercial for his books. [Laughs]

Keith Simanton, IMDd senior film editor: Naren, between season 3 and season 4, you’ve been on the same kind of roller coaster ride that you’ve put us through, watching the show. Can you talk a little bit about going from season 3 to premiering on Amazon Prime?

Naren Shankar (showrunner): Going from the end of season 3 to 4, it’s kind of like dying and going to heaven. I mean, it was over essentially at the end of season 3. We had tried to work with Syfy and our studio, Alcon, and tried to make the show work, continuing on. At the end of the day, they had canceled us. I was in the process of making all those difficult calls to department heads and cast, and we were all like, OK, guys, it’s over, and we did something to be proud of, but it’s done. There was talk about, Oh, maybe we can move it to Netflix or to Amazon, and those talks were sort of in the air. But nothing had happened.

Then the fans started kicking in, and it became this thing. Then there was a plane over Amazon [with a banner that said “Save The Expanse”], and it was this incredible love that came out. Cas was heavily involved in this from the beginning, and there were people on the crew who were involved in it, but it was really a fan-generated thing. It wasn’t directed. It just kind of happened….

We had agreed to do a panel at the International Space Development Conference. Jeff Bezos was getting an award there. We did our science panel, which was filled with rocket scientists, who are our people, and we’re sitting around, and drinking—which is something that we tend to do—

Frankie: Don’t make excuses for it. We like to do it. Together.

Naren: And suddenly somebody comes over [at the conference] and says, “Jeff Bezos would like to meet you.” And we’re like, He does? And we go back and meet him, and he was very enthusiastic and knew all about the show. And he said, We’re talking about it, we don’t know if it’s going to happen.… And we’re all kind of shook. Me, Steven, Wes, Cara was there, Cas… We didn’t know what was going to happen. And we sit down [for dinner], and people are coming up and getting their [awards during the event], and— Wes, you tell this part.

Wes: I like to play “What if?” And we saw Jeff on his phone during the whole thing. And I leaned over to Naren and said, “You know he’s on the phone putting the final touches on the deal, and when he gets up there, he’s going to announce that he’s saved us and he’s picked us up.” And Naren is like [mimics laughing uproariously, slaps knee]: “Yeah, that’s great, that’s totally what’s going to happen.”

Wes: Yeah, it was almost like he was mad that I was getting his hopes up. And then [Jeff Bezos] got up on stage and says, “How many people here are fans of The Expanse?” And then me and Naren look at each other….

Naren: It was an incredible moment. There’s little video of it, too. Everybody’s at the table, and Jeff says, “We’ve saved The Expanse. Amazon Prime is the new home of the show.” And everybody stands up—except for me. I sit at the table, and I’m like, Whaaaaat?

Wes: To put a point on how surreal the moment is, we were jumping around, we were all excited, and I was patting some guy on the back, and he turned around, and it was Buzz Aldrin! 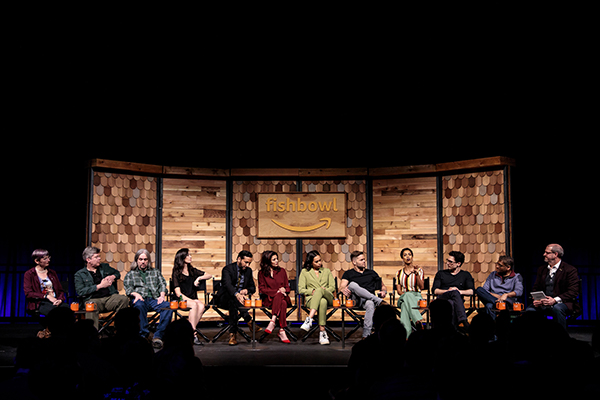 Season 4 of The Expanse TV series arrives on Amazon Prime Video on December 13. While the authors would never encourage you to do so, start your reading adventure of The Expanse with Leviathan's Wake or this amazing boxed set. (And keep reading through book 8, to see if Daniel Abraham is joking in the interview above about who lives and who dies.) 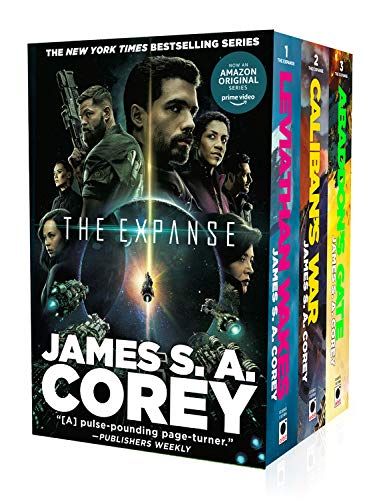