The poet behind the mask 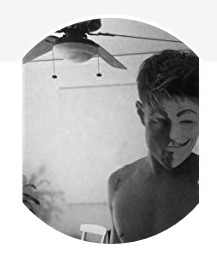 You may know his poetry if not his face. Sia has her wig and Atticus has his Guy Fawkes mask, only adding to his mystique and the size of his Instagram following (which includes celebrities like Karlie Kloss and Emma Roberts). Atticus's latest collection, The Truth About Magic, reminds us of everyday enchantments, which we sometimes neglect to notice in our increasingly distracted lives. Here, he explains how he found poetry, and why dons the mask.

It was a chance encounter, really. I was in the famous casino in Monte Carlo—a place I had no business being in, but how I got there is a story for another time. I sat down next to an actor named Michael Madsen. If you’ve never heard of Madsen, he plays the bad boy in more than a few great movies. We became quick friends, and I found him to be one of the most profound people I've ever met. He opened up to me about his struggles with addiction, depression, and how poetry had “saved his life.” This was a powerful idea for me. Here was a macho, all American guy who had done and seen it all—and he wrote poetry. We talked about writers Bukowski, Hunter S. Thompson, Sylvia Plath, and F. Scott Fitzgerald, and his favorite artists like Basquiat and Monet.

A few days later, I was walking alone in Paris and I saw what I thought was the most beautiful scene I’d ever witnessed and was compelled to write it down. After that, I couldn’t stop writing. I decided to post my words on Instagram, but to do it anonymously. I felt it would help me write vulnerably and honestly—and if I'm truthful, I was also feeling a bit shy. I chose a pen name, a name I had always loved, Atticus (I was also a huge Harper Lee fan growing up). For my profile, I used an old picture of me in a mask. And there it was: Atticus was born in Paris that summer.

I never expected people to follow me or for the words to resonate. But surprisingly, the account grew quickly. Celebrities started following and sharing my poems. Then people started getting my words tattooed on their bodies. Even now, three books later, I still can't believe how many readers have connected with the writing. In a world that's obsessed with fame and celebrity, I find that poetry reminds us to slow down, to observe the beauty around us. Just like Madsen said, poetry really can save your life.

And for now, the mask stays on. Maybe that will change one day, but until then, I'll be sending love from the shadows.