"Are We Prepared To Let Some People Live Above the Law?": Fredrik Backman on "Beartown" 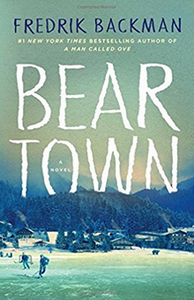 Every so often you read a book that is simply magic. No, not the Potter kind of magic, but a kind that has an air of completeness in its creation, its telling, and its impact on the reader. Beartown is magic. Pulling us in from the very first sentence, author Fredrik Backman takes readers on a journey far away and unexpectedly within ourselves. Here, he answers some of our questions and takes us behind the scenes of Beartown.

Penny Mann: You write from your gut, and Beartown is very different from your previous novels—what compelled you to tell this story?

Fredrik Backman: Probably the combination of having a lot of spare time and very little self-awareness, as usual. It started as a script for a TV show, actually, but as it turns out I am not fit to be in a room full of people who like “meetings” and say things like “out of a production budget standpoint.” I just get into fights with production companies, so eventually my agent and my wife and my dad suggested that maybe I should just go “sit alone in a room and write and not … talk to people.” So I did. It’s much better for me, because novels have no budgets. If you want a dragon, you can have a dragon. Have three, if you want. What was the question again? Yes! No! There are no dragons in the novel. But there is a lot of sports. And I think I wanted to try to tell a story about my love of sports, both the best and very worst sides of it. Because being a sports fan as an adult forces many of us to face our own hypocrisy. The things we let athletes get away with just because they’re important to our teams, and the whole host of arguments that we invent to protect what we love fascinates me. I’ve been such a big part of it, I felt I could write a story about some really horrible aspects of sports because I’m … well … not an outsider. I’m not an academic trying to dismantle it from an intellectual perspective. I’ve lived with sports my entire life. It actually saved my life on a couple of occasions, I think. So this is a story about that love, and the horrific consequences it can have when a community tries to cover up a crime committed by their star player. When people ask me about my “inspiration” for it, I tend to say that the inspiration for many of the worst people in it comes from myself. Good people can make really bad choices. So this novel was a lot of looking myself in the mirror, and a lot of tough questions. What would I have done? Would I have been one of the bad guys or one of the good ones? And how many of us get stuck in between?

P.M.: A Man Called Ove was inspired, in part, by people and situations in your life. Is this also true for Beartown?

F.B.: It’s always the case for me. It’s like orange juice, it takes a lot of oranges to make one glass of juice and it probably takes 30 real people to create one fictional character that I believe in and can write about.

P.M.: One of the beautiful things about Beartown is that the town itself is a character--the setting is at once vital to the story, and yet it recedes into the background as the reader gets swept up in the emotional experiences of the characters. Why did you choose this sleepy, woodsy hockey town as the backdrop to this story, which has some very universal themes?

F.B.: Because I know it, probably. There’s a million places like that, and I think I like small places more than big cities because in big cities people can spend their whole lives without ever having to hang out with anyone who is not exactly like them. People find their groups where everybody dresses the same, talks the same, has the same political views and likes and dislikes all the same things. In a small town you don’t have that choice: People there are going to influence you, whether you like it or not. It makes for better stories, I think.

P.M.: This novel has quite a large cast. Did you set out knowing you wanted to tell Benji's story as much as the others’?

F.B.: Yes. I set out to tell everyone’s story, I just had to take some of them out as I went along. But I liked the fact that I could let a character grow into the story; they could be supporting actors in the beginning and leading actors by the end.

P.M.: Some of the character references in Beartown are noticeably vague--"Kevin’s mom," "the bass player," Was this intentional?

F.B.: Again, yes, but it’s not just a matter of creating a feeling, it’s also a matter of attention economy on the readers’ behalf. If EVERY character has a name that’s quite a lot of names to keep track of. So once in a while I like to give them a title instead. The most important thing for me in telling a story is always that the reader doesn’t get lost.

P.M.: Beartown highlights the extraordinary impact that sports can have on families and communities, and it isn’t always good. I know you’re a fan, but do you think sports have become too important and influential? Is Beartown meant as a cautionary tale in some respects?

F.B.: Sports are both good and evil, great and bad - everything we really care about is always like that. We invest so much feeling into it, of course it’s sometimes going to make us better and sometimes bring out our very worst qualities instead. In the case of Beartown, the town’s economy plays a very big role in sports, and vice versa, and then a lot of things become … political. And that changes the whole premise of the story. To me one of the most important lines in the book is: “What is a society? It’s the sum total of our choices.” It’s impossible to say when sports become TOO influential, it’s just a constant struggle with ourselves to be brave enough to ask ourselves tough questions, I think. To keep re-drawing the line as we become smarter. But with all that said: I could have written this story about a small town with one very successful company at the center of it, a company that employs everyone and in that way affects them all. The star of the hockey team could have been a genius entrepreneur. The questions would have been the same. Are we, as a society, prepared to let some people live above the law, if they’re important enough to our economy and well-being?

P.M.: You’re working on a sequel. Any details you’re willing to tease? Will there be some resolution to Benji’s story?

F.B.: It’s called “Us Against You”, directly translated from the Swedish. And it deals a lot with violence. One of the opening lines is: “It’s so easy to make people hate each other, it’s a mystery we don’t do it all the time.” And yes, it’s a lot about Benji. I would say he is the main “engine” of the story this time around.