The books behind these big fall movies

We are in a time when movie makers big and small are racing each other to snap up the rights to books they can turn into the next blockbuster film. This fall we’ll see titles that have been waiting years for their moment on the big screen, along with novels rushed into a theater near you.

Among this fall’s selections is a book released as a memoir over a decade ago. It was at first much-lauded then later eviscerated for the liberties taken with calling it “nonfiction.” We also have the follow-up to one of the best-known scary movies of our time, a psychological thriller with a marquee cast, and a film adaptation of a book near and dear to my heart that has Edward Norton in the starring role of a detective with Tourette’s syndrome. There are a lot of exciting new movies to see — and still time to read the books behind them — as we look ahead through the end of the year.

The Good Liar by Nicholas Searle

A novel that’s earned comparisons to Patricia Highsmith’s The Talented Mr. Ripley, this psychological thriller about a seasoned con man and his seemingly easy mark looks forward and back in time, revealing dark secrets and a complex game of cat-and-mouse. While the idea of a con man meeting a lonely, wealthy woman online and weaseling his way into her heart and home is not new, author Nicholas Searle crafts something original with The Good Liar’s characters and scope. The film adaptation looks like a winner, with Ian McKellen as the con man Roy Courtnay, Helen Mirren as the wealthy widow Betty McLeish, and Downton Abbey’s Jim Carter playing the role of Vincent, Roy’s friend and confidant in his scheme to take Betty for millions. This could be the big-screen thriller we’ve been waiting for this year.… Release date: November 15. 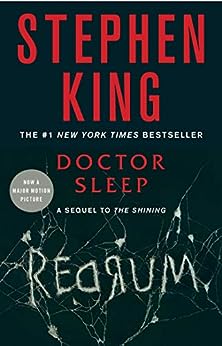 Stephen King’s book The Shining is every bit as scary as the film that gave Jack Nicholson one of his most memorable roles, and both versions have remained classics of horror for decades. Then in 2013 Stephen King wrote something I certainly never expected: a sequel.

Set years after The Shining ends in all its bleak glory, Doctor Sleep picks up with an adult Danny Torrance who has finally found some stability as a hospice worker, where he can use his dark gift to secretly ease the way for the dying. Danny meets a young girl with powers even stronger than his own and learns that they are both in mortal danger from a cult searching for people with their ability so they can to access the other side of death’s door. The book has received rave reviews from Amazon customers and the Amazon Books editorial team, and there are certainly high expectations for the film adaptation. You’ll find Ewan McGregor in the role of adult Danny Torrance in the film, which will stay true to the book but live in the movie universe of its predecessor. Release date: November 8.

The inspiration for a movie titled Jojo Rabbit starring Scarlett Johannson and directed by Taika Waititi, Caging Skies was only released in the United States in August of this year, having received accolades in various translations since its original publication in 2004. Set in Vienna during the 1940s, this is not your typical World War II story--it’s a black comedy--and the movie adaptation takes it even further in the direction of satire. Johannes Betzler is a 10-year-old Hitler Youth who discovers his mother is hiding a Jewish girl in their home. Jojo is torn between his fascination with and hatred for her, but when he’s left on his own, the girl’s life suddenly depends solely on him. Borderline absurd, Luenens’ novel mixes together daydreams of Hitler with utter tragedy in a book that draws a range of emotions from the reader. Though there’s more emphasis on comedy in the film adaptation, both travel an unexpected path to empathy. In theaters now (released October 18).

This is one of my all-time favorite books. And I’m a huge Edward Norton fan. So I’m seriously torn about seeing the film Motherless Brooklyn because it must be wonderful or I’ll be hideously disappointed. Jonathan Lethem’s twist on a classic noir detective novel had me laughing to the point of tears when I first read it. Frank Minna is a mobster who employs a group of men who grew up together in a boys’ home. One of them is Lionel Essrog, a Tourette’s syndrome sufferer who does startling things with words and is an outcast to beat all. When the boss is murdered and infighting begins, Lionel somehow holds things together enough to try to solve the case. In the film adaptation Bruce Willis plays mobster Frank Minna, Edward Norton is Lionel Essrog, and the two Randolph brothers are represented by Alec Baldwin and Willem Dafoe. With this cast and the unforgettable novel behind it, Motherless Brooklyn might be the movie I’ve been waiting for all year. Time for a quick re-read. Release date: November 1.

James Frey’s A Million Little Pieces first evoked shock and praise in 2003 for Frey’s take-no-prisoners honesty about the depths he sunk in addiction and the road to sobriety upon which he crawled. Then the rumbling and skepticism began about how honest Frey really had been. The end result was plenty of outrage and controversy that made authors’ disclaimers about memory and “events as I recalled them” almost standard for memoirs going forward. But the book, whether you categorize it as fiction or nonfiction, packs a punch. And we’ll see this gritty life story of waste, excess, and redemption played out in a film adaptation that stars Billy Bob Thornton as Leonard, the lifelong friend James Frey meets in rehab, in what may be a stroke of casting genius. Release date: December 6.