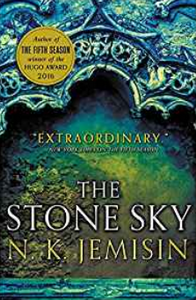 In this edition, the conclusion of a popular sci-fi series, book-talk in bathrooms, a plea for audiobook recommendations, and monied people make a muck of things...

Adrian Liang: I’m diving headlong into N.K. Jemisin’s The Stone Sky, the final book in her Broken Earth trilogy (sob!). Jemisin’s writing is matched only by her imagination, and I’m not alone in thinking that: She won the Hugo Award for The Fifth Season, the first book in this series. The Stone Sky hits shelves and Kindles in mid August. Because I’m an unabashed Star Wars fan and I can’t resist an action-packed story that involves shooting and droids and secret alliances and heroic moments, I’m cracking the spine on Christie Golden’s Star Wars: Battlefront II: Inferno Squad. Last year Golden wrote the thrilling Star Wars novel Dark Disciple about bounty hunter/former Sith Asajj Ventress, and I also enjoyed the first Star Wars: Battlefront book enormously. I know—books based on videogames can too often be underwhelming. But I’m hoping like crazy that I’m going to be overwhelmed—in a good way—by Battlefront II.

Erin Kodicek: I was recently admonished in the restroom by a colleague I had recommended The Twelve-Mile Straight to (I know, awkward. She will be sorry the next time she needs me to spare a square). The nature of her grievance was that she had lost a night's sleep because Eleanor Henderson's novel was just so, so good that she couldn't put it down. That is a lot of enthusiasm to muster for a devastating story that takes place in Georgia during the Depression and Prohibition years, but it is entirely warranted. The title refers to a road that a field hand's corpse is dragged on, after having been murdered as punishment for allegedly impregnating a sharecropper's daughter. Tackling themes that are still horrifyingly resonant today, I'm going to lose sleep myself, finding out how everything shakes out.

Seira Wilson: The longlist for the Man Booker awards was just released, so while I’m still doing a little reading for August, I’m also going to sneak in a book that's on the list, Emily Fridlund’s History of Wolves.  Everyone who’s read it here has loved it and I’ve had it on my “want to read” pile for a few months. It's the story of a young woman, a loner, who falls for people who are not what they seem. Edge of your seat stuff, and now the award nod gives me an excuse to get back to it. I just finished my last audiobook (Ginny Moon, which I loved!) on my way to work this morning, so I’m now trying to decide what to get next. I’m torn between American Fire (true crime, kind of a Bonnie and Clyde of arson) and another mystery (a favorite audio genre for me), The Magpie Murders (an Agatha Christie style whodunit). Any other audio recommendations?

Sarah Harrison Smith: I’m sticking close to home this summer, so books set in more exotic places really appeal to me. Lawrence Osborne’s Beautiful Animals, which Hogarth published last week, takes place on the Greek island of Hydra. The novel’s plot is timely: two young women out hiking come upon a Syrian migrant, surviving, barely, in the wild, and their attempts to help him go horribly awry. Osborne specializes in writing about the messes privileged people get themselves into abroad. In his 2012 novel, The Forgiven, an older couple driving to a sybaritic house party in Morocco accidentally kill a Berber boy, and their choices afterward seal their own fates. That was a scary, serious book, and I expect nothing less from Beautiful Animals. It might be the perfect summer read for an armchair traveler: you can enjoy the thought of being somewhere else, while being glad, in the end, that you aren’t.