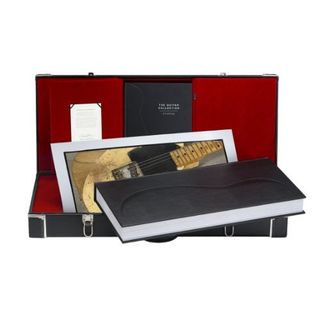 One of the things I always look forward to during the holidays here at Amazon are the mouth-wateringly beautiful collections, compendiums, boxed sets, and retrospectives we get our hands on. They're the kinds of books that create a visceral reaction in book fiends like me.

2011 has plenty of these luxurious books for every reader (it's hard to admit, but my drool-worthy favorite last year, The Oxford Companion to the Book, was replaced this year by the equally stunning--and, dare I say, more delicious--The Oxford Companion to Beer). To get a sense of the scope of these titles, check out our featured coffee table books, including everything from Harry Potter to high-end shoes.

One of the most unusual books this season is surely the mammoth, limited edition book, The Guitar Collection. At 512 pages and weighing in at 44.8 pounds, this is a monster book of guitars. There are three different editions--with only 1,500 numbered copies of each available--and each celebrating a different era and style of music:

It's a pricy gift, to be sure, but one that would surely make true guitarists and rock 'n' roll fans salivate. As Billy Gibbons says, "The Guitar Collection is, indeed, the single most sumptuous source of guitar glamour to have ever been conceived.  It's an overwhelming compendium, so dazzling in its scope that you might have to lie down after paging through it."

Check out a video of the book after the jump.