Eve Ensler on "The Apology" 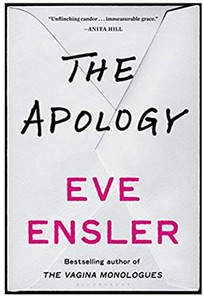 Mahatma Gandhi once said: “The weak can never forgive. Forgiveness is the attribute of the strong.” This quote came to mind as I was reading Eve Ensler’s slim but profoundly powerful The Apology. Written as if it were a letter from Ensler’s father, it recounts the sexual, physical and psychological abuse he inflicted on her from the ages of five to 10, and acknowledges the reverberating effects it has had on her life. Moreover, it does what the master gaslighter and coward couldn’t before he died: take accountability for his crimes and ask for absolution. This brutal purging will be understandably triggering for some, but for Ensler—and hopefully for other survivors—it provides a pathway to healing.

Ms. Ensler talked about all this and more when we sat down with her recently. This interview has been edited and condensed for clarity.

Erin Kodicek: How did you conjure the courage, and the compassion, to write this book?

Eve Ensler: It grew out of a number of things. I was sexually abused by my father from the time I was five until the time I was 10. After that, he violently abused me until I left home, almost killing me a couple of times, and all my childhood I longed for an apology. I just thought there was going to come this moment where he's going to wake up and go, What have I done? I'm so sorry, and do an accounting, but that never happened. He’s been dead 31 years now, and there was still this yearning in me, this hunger for that reckoning. And so I thought, well, maybe I could write the apology my father never gave me, and say the things and write the words I need to hear. Once I made the decision to do that a portal kind of opened; and it was very, very painful to enter his psyche, in a way--to see what he was thinking about, what his intentions were, and what he meant to be doing. It was also very painful to see what had made him the man he became--what had happened to him in childhood and how his tenderness was cauterized and cut off; how his heart was maimed and how he had been idolized. But idolization isn't love. It’s a projection of someone's idealized image of you onto you and you have to live up to that whether you are that person or not. Everything that doesn't fit into that image you have to push underground. In my father's case it was his humanity, his openness, his gentleness; it was his doubt, and his curiosity. All that got pushed underground until it finally metastasized into what he called the Shadow Man. And I think going through that, touching my father's pain was in some ways the most difficult part of this because it was definitely where I did not want to go for many years. I didn't really want to know about my father's pain, and I want to say this book is an offering. It’s not a prescription. There will be people who don't want to even engage with the idea of an apology and that's totally fine. Survivors know what they need to do. But I needed to do this; I needed to let go of the last vestiges that were keeping me in that victim/perpetrator relationship.

As much as The Apology could be very healing for women who have experienced abuse, it’s also a very important book for men to read, and men are reading it. What has the reaction been?

If we don't get to the roots of this violence and discover what in men, what in their childhood—what in the acculturation of patriarchy--is leading to this, it will continue. But men are responding surprisingly well to this book. I’ve been shocked by how many men have invited me on their shows, how many men are reviewing it, and really understanding it. I've been on a five-week tour around this country and Canada and the UK, and men are really looking for pathways to begin to articulate, investigate and self-interrogate why it is that some are capable of this kind of abuse. It’s not millions of men yet, but it's a substantial number, and that’s made me believe that there is at least a core group that are interested in transforming and deconstructing patriarchy.

You have launched a website, theapologybook.net. Tell us about that.

Yes, I'm very excited about it. We invited activists and advocates to open a discourse about what a real apology is, and one of the things I learned writing this book is that it's a practice; it's a journey. It’s not, Oh, I'm sorry if you feel bad or I'm sorry if I hurt you. That's not an apology. An apology is a humbling; it's making yourself vulnerable; it's an equalizer. When you apologize you say that what occurred did occur; you remember; you reattach; you take responsibility. And I also think that so much of an apology is found in the details, in its specificity. That's where the liberation for both the victim and perpetrator lies. And it's also the person who has caused harm investigating their life, going back into their history to ask and unravel: What led me here? And so the site invites people to send in their apologies. There's also a toolkit on how to create different types of apologies, and we welcome anyone to participate and offer suggestions.

You're hoping that perpetrators will contribute as well...

Indeed. One of the first ones we received was from a perpetrator, and it was a very good apology. It was sincere and deep and layered; he did the work. I think if we can start putting these out there as examples, it will hopefully encourage other men. It’s anonymous. There's no risk, but it's you getting to go through a journey and an experience where you begin to reckon with what you've done and take responsibility. Then it's up to you whether you want to go and send that to the person you've done it to. But I think even the practice of it—getting the wheels moving and doing this exercise helps an abuser begin to work on all the dark stuff that they’re holding inside, which is usually creating more dark stuff.

We're in another iteration of the #MeToo movement, more stories of abuse are coming to light, but there's still this disconnect when it comes to accountability. Are you optimistic that The Apology will be impactful in terms of providing a blueprint for healing?

I hope so, and I think if men are brave enough to come forward and start to do this work, others will be inspired to do the same.

I read something you said recently that was very interesting, that often survivors of abuse will know their perpetrators better than they know themselves. After writing this book, do you now know yourself better?

That's a very good question. I think what I feel is that I like myself better; I actually have more love for myself than I've ever had. One of the things that haunts survivors is the why, like, Why did my best friend drug and date rape me? Why did my father want to kill me? So much of the time we blame it on ourselves; we think something's wrong with ourselves; we think we did something bad; we think we caused it. Writing this book I began to see that it really had very little to do with me. It was my father who did all this; it was his story; it was his disassociation from himself; it was his inability to feel; it was his inability to hold tenderness. I've been released or relieved from any sense that I'm a bad person. I now understand that it wasn't me--it wasn't me at all. I was a child. When you've been raped or beaten or anyone’s invaded you, they in some ways become embedded inside you. We can hold our abuser inside us for many years. My father's been inside me. I've been in a dialogue with him whether I know it or not, proving to him that he was wrong. With this book, I want to say to survivors that this exercise is really powerful. I realized that I could turn how my father lived in me from a monolithic monster into an apologist--from this terrifying entity into this broken, sad, tragic little boy. In doing so he lost agency over me, power over me. He’s gone.

That's the last thing you write in the book: Old man be gone.

He’s gone. He hasn't been back, and so I would highly recommend that survivors do this, but also do it with a therapist, a counselor, clergy, friend...So you're not alone in the process, because it will be grueling; you have to go through the wound. You know, the wound is there, you just got to go all the way through it because on the other side there is liberation. But you can't stop midway.