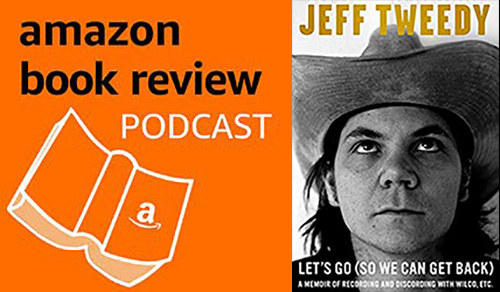 We've reached Episode VIII. That's as many episodes as the "Skywalker saga" Star Wars movies! But it took over 40 years to make those, and three of them (or maybe seven) practically don't count. (You know which ones.) Also, we have released all of ours in order.

Maybe that's just hubris talking. Maybe. But let's torture the analogy and talk about stars. Episode VIII of the Amazon Book Review Podcast is full of them. First off, three of the Amazon Books editors talk about celebrity biographies that we've enjoyed over the years, and sometimes over the decades. Conversation turns to Marie Kondo—author of the bestselling The Life-Changing Magic of Tidying Up and star of a new Netflix series—about her somewhat controversial (at least to us ever so serious book lovers) approach to personal libraries. Finally, Wilco frontman Jeff Tweedy joins us to talk about dad rock, dad bods, and his charming memoir, Let's Go (So We Can Get Back). Among other things.

See the show notes below for a run-down of the books discussed in the podcast. All episodes are available on iTunes and TuneIn – and don't forget to subscribe.

Is Marie Kondo coming to take your book collection? (19:30)

Three different takes on book collecting and whether the MariKon method has any place in the library.