Anne Lamott: "How My Mother Taught Me to Grandmother" 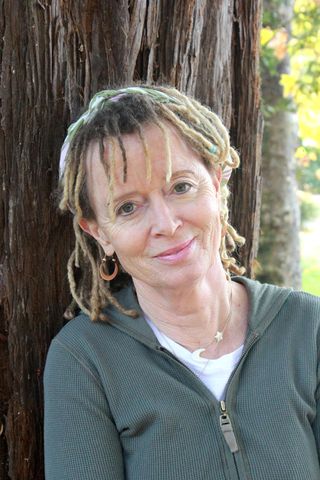 My son adored my mother, who was a handful, believe me. She was from Liverpool, which I believe explains all of her most annoying, argumentative tendencies. (I attend twelve-step meetings for the children of the English.) Her real name was Dorothy, which she hated, and when her father died when she was ten, she reinvented herself as Nikki, the name of a popular girl on 1930s English radio.

My brothers and I called her Dot to tease her. She was at her best when being teased, swatting at us and squawking like an injured but good-natured crow. She actually loved being teased: it meant you were loved, in spite of it all. She was always quite plump and wore any old, odd clothes and—sorry, Mom—slapped on loud makeup every morning. Other mothers kept their weight down and dressed with 1960s style and youthful makeup. To us, compared with our mother, all the other mothers looked like Jean Shrimpton.

And she could be simultaneously pleased with herself and angry, in that English way, like a Monty Python character who might suddenly stab you with a passion fruit.

My son was the first grandchild in our family. Mom chose her grandma name, Nana, when I was a few months pregnant. I started calling her Nana most of the time, unless I was trying to show my love by calling her Dot—caw, caw. She and Sam both had huge brown eyes and shiny dark hair. They played together often at her studio apartment and at a postage-stamp-sized beach nearby. He did not find it annoying when she insisted on wearing sweaters during heat waves or asking for a bite of his bacon. He didn’t mind that she would argue with me when we were all together. A typical opening salvo from her might be, “But Jack and Bobby Kennedy were great,” as if I didn’t also feel this way. It made me want to choke her to death. Sam just thought she was funny.

She became sick with Alzheimer’s in her last few years and died in 2001, when Sam was twelve, really still a boy, bashing branches against riverbeds and trapping spiders. He was matter-of-fact about her death: she’d gotten to stay in her apartment with her cat until the end, she hadn’t appeared to know she was dying, and she’d had us. Sam seemed to be saying, “We should all be so lucky.”

I was sad for her, and for Sam, her friends, and me, but to be honest, my life was much easier after her passing, as I no longer had to be a mother to both a prepubescent and a seventy-seven-year-old Englishwoman. And a brand-new relationship with her began to blossom. Her absence provided the breathing space for us to connect beyond our aggravating, codependent history together. I fell in love.

I saw past her faults to her stunning intelligence, saw past her annoying insisted-upon habits to her beautiful bleeding-heart character and lifelong activism on behalf of the underdog, saw past the strange clothes and bad makeup to the immigrant heart of a girl from Liverpool whose father died so young.

I looked forward to funny little moments of contact, through the smells of beaches and yeasty Danish pastries.

Seven years later Sam had a child, my grandson, Jax, who also has huge brown eyes and dark hair, like his daddy and his great-grandmother.

My mother had not cared that I was single and broke when I had my child at thirty-five, because she just wanted to get her mitts on that kid, and she would not have cared about Sam’s being so young when he became a father, for the same reason.

So I tried not to, either. Okay, maybe I had a tiny position with Sam’s age—nineteen—but mostly I just wanted to get my mitts on that kid, too.

The only important question was: What did I want Jax to call me one day?  My rather cold paternal grandmother had been “Grandma,” which is what conservative politicians call all older women. And my senile mother’s mother had been “Nanny,” which is a great name, but for a while I wondered if maybe I should meet the little guy first. Instead I picked my grandma nomenclature when Jax’s mother was about four months along, maybe three. Never mind, it’s all coming back: it was a month and a half. I chose “Nana.”

I wanted to honor my mother, even though she had driven me crazy for most of the forty-seven years we spent together on this earth. I wanted to honor how much Sam and she had loved each other, how ecstatic she’d been about his arrival, although circumstances had not been ideal. But more than anything, I wanted to think about her many times a day, because she was my mother. She put calamine lotion on my stings and rashes when I was little, and blew on my skin gently to cool me off. She read Little Women to me and taught me to make meringues dipped in dark chocolate and sprinkled with slivered almonds. She went to law school when I turned fourteen. She loved the first stories I began to write. She lived to play with my son.

Sam’s love for my mother gave her to me, and Jax’s love for my son gave Sam to all of us. So I’ll hear a piece of music my mother and I loved together—Mozart, or a union song, or Judy Collins, or Ella Fitzgerald—and my heart shimmies for a few seconds as I think, “Mom, listen!” And we smile.