Comics in Translation: A Conversation with Kim Thompson of Fantagraphics Books 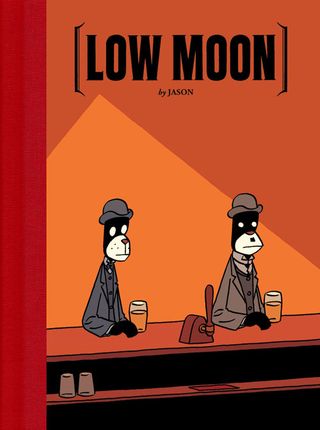 Norwegian-born Jason has written comics and graphic novels for years in both his native Norwegian and in French. Fantagraphics first published his graphic novella Hey, Wait... in 2001, and he's been building a steady base of U.S. fans ever since.

His latest collection, Low Moon (including the chess-battle Western "Low Moon" serialized in the New York Times Magazine in 2008), has filmic moments and comic pathos that have set a new standard for me for short fiction.

None of us would ever get to enjoy the wry dialogue of Low Moon or I Killed Adolf Hitler or The Left Bank Gang without the efforts of Fantagraphics' co-publisher and translator, Kim Thompson. Jason is just one of many cartoonists that Thompson has translated for Fantagraphics Books. In fact, he says that translations represent about 10 to 15 percent of what they publish every year.

Thompson graciously agreed to answer my translation and Jason questions:

Amazon.com: How did you first encounter Jason's work, and how did Fantagraphics decide to publish it?

Kim Thompson: To be honest, I'm not sure if his Norwegian publisher sent me copies or I saw the French edition of Hey, Wait..., but I do know that the minute I laid eyes on it I knew we wanted to publish it. Love at first sight!

KT: No, no, not by a wide margin. I was translating Freddy Milton (Danish), Franquin and Hermann (French) and others way back in the 1980s, twenty years ago.

I translate pretty much every European foreign-language cartoonist we publish except for Matti Hagelberg who is Finnish (Finnish is well outside of my area of expertise) and a couple who do their own translations, such as Max Andersson. A more or less complete list of cartoonists whose comics I've worked on in the last couple years would be Nikoline Werdelin (Danish); Joost Swarte (Dutch); David B., Emile Bravo, Killoffer, Jacques Tardi, and Lewis Trondheim (French); Nicolas Mahler (German); Gabriella Giandelli, Igort, Leila Marzocchi, and Sergio Ponchione (Italian); Jason (Norwegian or French); Max (Spanish); and Martin Kellerman (Swedish). I also translated a bunch of captions from many of those languages in our upcoming book of ANTI-WAR CARTOONS.

In case you're wondering, I don't actually SPEAK all of those languages, but I can read them, more or less in some cases. My mother is Danish so Danish is my native language. Swedish and Norwegian are so close to Danish (they're basically almost dialects of one another -- in fact Norwegian and Danish were the same language not too long ago) that with a little work any Dane can read them pretty well, as I do. I learned Spanish in high school and kept up with it. I lived for six years in Germany and also studied German in high school, so that stuck with me too. I lived for three years in Holland. Italian is my weakest language, I sort of plow my way through that thanks to French and Spanish and use of a dictionary -- but all my Italian translations I always check with the authors anyway.

Amazon.com: Translation is such an immersive experience, even more than editing, and I wonder, do you feel differently attached or connected to the works you translate than to other works you publish?

KT: Yes, at times I feel almost like a co-creator. Which is arrogantly excessive, and the feeling fades soon enough! But I'm also more invested in these books because I work so hard on them, and in many cases, of course, such as Tardi, I'm literally fulfilling a childhood dream by translating them. 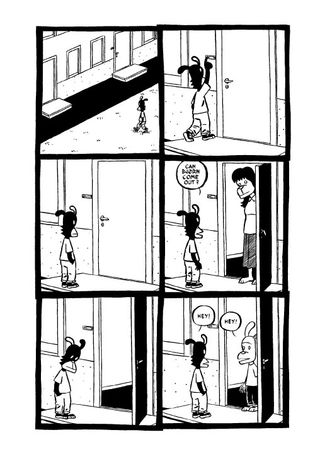 KT: Jason creates the entire story in French, draws and letters it, sends me the finished French version. (I think he sometimes actually does a draft for himself in English first from which he derives the French version, but I don't see that.) Then I translate that: We delete the French lettering in Photoshop and replace it with my translation, usually using an English Jason font. (Jason's original is hand lettered, of course.)

Jason did hand letter the English language version of Hey, Wait... himself before we developed the font, and he did hand letter the Low Moon book because the "Low Moon" story itself was done in English to begin with (since it was done for the New York Times) and he wanted a consistent look for the book. Hand lettering is always preferable but it's rare that you have a cartoonist willing to re-do all that work -- although Jason's comics are often not very wordy, so it's easier for him. We do have an excellent font, I think, which we've used on all the other four-color and two-color books we've done, as well as the anthologies Pocket Full of Rain and Meow, Baby!

Amazon.com: Jason's work is so influenced by American pop culture and films. Does that make them easier or harder to translate? (i.e., easy b/c he can communicate a lot with a familiar genre, like the Western in "Low Moon," and hard because he sometimes jokes about specific pop cultural references, although I'd say that happens more in his early work. But that must have been a challenge in putting together Pocket Full of Rain.) 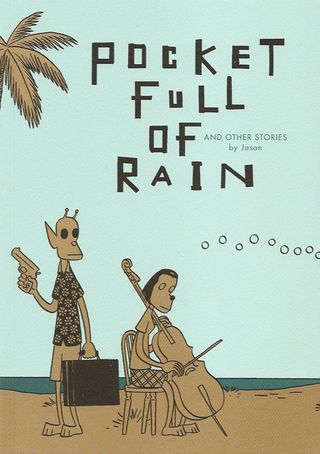 KT: I have a lot more difficulty with pop-culture reference in something like Rocky, since Martin Kellerman uses a lot of Swedish references. You try translating a joke about a Swedish rapper! (Even worse, Kellerman has a lot of STOCKHOLM-specific references.) Jason's references are almost never to Norwegian pop culture, and the references to French pop culture are usually internationally well-known enough that it's no problem. In the next book he's doing there's a sequence where they discuss female French movie stars, but everyone knows Brigitte Bardot and Juliette Binoche.

As you point out some of his earlier books have references to Norwegian pop culture, but he and I worked on finding international equivalents. It was fine.

He's also cognizant that his work is being translated internationally now, so I'm guessing he'll avoid any too specific French references. But his cultural tastes are really very American, or for international work that is known in America. It's totally not a problem.

Amazon.com: Jason's comedy is pretty visual, with the deadpan two-shots and other moments of inaction that totally crack me up. But in some stories it's the dialogue that kills--for example, in Low Moon, "Early Film Noir", where the dead/resurrected husband keeps coming back with the same line again and again, or the awkward sexuality of "Emily Says Hello." I guess my question is, do those types of jokes translate pretty directly, or do they require some cultural tweaking and back-and-forth?

KT: It's pretty direct. Jason's dialogue is very straightforward (probably also because he's a native Norwegian working in French) so it's just a matter of finding a suitably deadpan equivalent in English. Any tweaking back and forth is usually finding the exact right tone, almost never with any confusion about cultural equivalents.

Amazon.com: Do you have a favorite story in Low Moon, and why is it your favorite?

KT: Each story has different qualities that I appreciate. I think the funniest moment in the book is in "&," the fat character's decision to kill one of his rivals as signaled by a microscopic, typically deadpan shift in his eyeline toward the roof above them from which he will soon dispatch a lethal projectile. Kind of Chuck Jones Wile E. Coyote moment. (See? Another U.S. reference!)

Thanks, Kim. Low Moon is on sale now.--Heidi