Unconditional Love Wins: Tracey Garvis Graves on "The Girl He Used to Know" 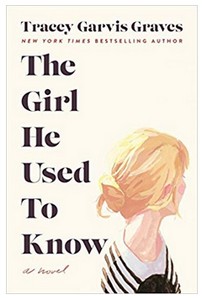 Annika and Jonathan are each other's person (in Grey's Anatomy parlance). So when the quirky librarian and handsome financier reunite in the frozen foods section of a grocery after a ten year separation, you wonder how their relationship could have gone off the rails. In Tracey Garvis Graves's unconventional rom-com read, The Girl He Used to Know , they try to find their way back to each other again. But first they’ll have to confront a painful episode from their past, and Jonathan will come to realize that Annika is no longer the girl he used to know (and that's not such a bad thing). You’ll laugh, you’ll cry. And here, you'll learn about the genesis of the novel, and what makes it unlike most others in the genre (in a wonderful way).

My inspiration for The Girl He Used to Know was a song called “Same Old Lang Syne” by Dan Fogelberg. It’s the one about running into your old lover in the grocery store on Christmas Eve. It’s one of my favorite songs and whenever I listened to it, I would think, I wish they could have worked it out and overcome whatever it was that drove them apart. Why didn’t they try to find that love again? Why did they both get back in their cars and go their separate ways at the end of the song? My version of the song’s premise is not a literal interpretation—the hero is not a musician and while the serendipitous meeting does occur in a grocery store, it doesn’t happen on Christmas Eve. But I did take a couple who were “old lovers,” reunited them in the present, and then wrote about what unfolded when they gave it another shot.

Because The Girl He Used to Know is a second-chance love story, I knew that something would have to come between the hero and heroine, otherwise, they wouldn't need a second chance. When I began creating the main characters, Jonathan was an uptight frat boy from a wealthy family who cared more about outside appearances than what was on the inside. Annika was a bohemian girl with dreadlocks, multiple piercings, and a tendency to eschew shoes. Of course, Jonathan would want her to change so she'd be accepted by his snooty family, and Annika would be faced with a dilemma because she loved him. But then they'd both realize they weren't being true to themselves and they'd find some sort of relationship compromise. The biggest problem with my line of thinking is that this story has already been told an infinite number of times. It's also pretty close to the plotline for the movie Grease. But then one day I thought to myself, what if Annika doesn't change because she simply can't? It doesn't matter how much she might want to change; her brain simply isn't wired that way. And what if Jonathan realizes this but accepts her anyway, even if he is occasionally frustrated by it. Now THAT was a story that fired me up and I couldn't wait to see what developed when I changed my approach.

I didn’t want to make it easy for them, but I wanted Jonathan and Annika to be characters readers would root for. I wanted to show the wonderful things they both brought to the table, and I wanted to give them a well-deserved happily-ever-after. The challenge in writing a story about a character on the autism spectrum was that I really wanted to make sure I portrayed Annika authentically and honestly. I read numerous non-fiction books, read countless blogs, and spent additional time reading about neurotypical people who were married to people who were on the autism spectrum. Those accounts were especially eye-opening because they helped me understand the special gifts neurodiverse people brought to their relationships.

Annika had many such gifts and her close friend Janice, her immediate family, and Jonathan were the beneficiaries. In turn, they were able to appreciate her for who she was. In my version of the story, no one gets back into their car and drives away after that random encounter in the grocery store. In my version, unconditional love wins.