"Kickflip Boys" - a conversation between Neal Thompson and Karen Russell 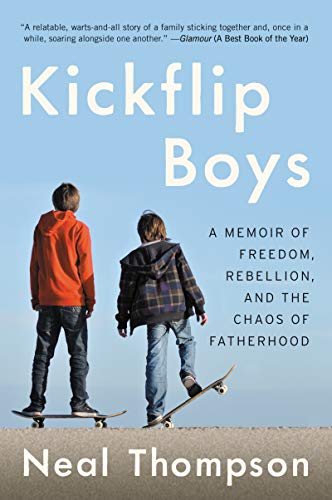 Neal Thompson's memoir Kickflip Boys: A Memoir of Freedom, Rebellion, and the Chaos of Fatherhood, which is about raising two freedom-seeking, rebellious skateboarding sons, published in paperback yesterday. Yesterday was also the publication date of Karen Russell's new short story collection Orange World and Other Stories.

As it turns out, the two got together to talk about Neal's book. Read on to learn more about Kickflip Boys and the trials of parenting. Raising children is never easy, and it's refreshing to see such an honest, candid take on the journey we take with our kids.

Karen Russell: Our son is 2 years old and he already seems to have a risk:reward limbic calculator steering him towards thrilling risk; I see his nieces gently and cautiously sliding down cushions that he barrels towards head-first, whooping and all-body, all-joy. Of course this might change as he gets older, and slightly more familiar with the laws of physics. But I loved reading Kickflip Boys at this early hour in our own parenting journey, because it felt like a field guide that was refreshingly frank about the challenges of simultaneously encouraging your children's independent flight while also keeping them safe, or as safe as is ever possible in this slippery, uncertain world. You write, "From their first steps, their earliest words, both boys struggled to navigate the world on their own often intractable terms."

As you returned to your boys earliest years, and their introduction to the subculture of skating, did you gain any new insights into the shape their lives have taken?

Neal Thompson: Like you, we saw the signs of our kids' inborn need for speed, freedom and risk from a really early age. We saw the warning signs ("No, you can't skip third-grade English to go skateboarding"), and the promising signs of kids who craved their own unique path through childhood. So we knew from the start that we were up against some challenges they definitely didn't cover in the "What to Expect" books. But it was more than physical risk they were after. What they sought were experiences that pushed or crossed boundaries, experiences that felt edgy and unexpected. I write about their blasé efforts at team sports (and, honestly, academia), but when they discovered skateboarding they found a sport and a culture with few rules, no coaches, no scoring, no winners or losers... literally no confined field or arena, so that all of Seattle, not just skateparks but streets and alleys and parking garages, became their playing field. I actually think part of the thrill of skateboarding for them was the trespassing.

KR: How did the act of telling the story of your boys' journey to adulthood change the way you saw your own role in it? Did Kickflip Boys reconfigure your own understanding of a parent's agency in a child's life story?

NT: The word I chewed on a lot while writing this book was complicity. I wasn't the most docile kid, either. I was a skateboarder and skier, a modest rule-breaker and boundary-crosser. So when I'd see my kids doing things that reminded me of me -- skate or study? comply or defy? -- I'd feel a mix of pride and dread. And I'd wonder: Is this my fault? Did my wife and I endorse this? Am I a bad dad? I describe all the parenting books I consulted, how I always felt scolded and shamed by them. But the truth is, while our kids absolutely pick up on the cues we send, they're also these unique individuals and there's only so much parents can (and should) control. They have to find their own way, and we have to let them, and we have to hope for the best. I can attest to the downside of trying to make them become something they're not. For us, so much of our parenting came down to trust and hope and patience and love. And taking deep breaths.

KR: One of the things I most admired about Kickflip Boys was its commitment to telling the truth about the messiness and second-guessing and terror and uncertainty of parenting. As a reader, there is real suspense; the boys' safe passage through the surreal landscape of adolescence never feels inevitable, and sometimes the stakes feel genuinely apocalyptic. You write that you originally conceived of a different kind of book, "a story about the gnarly history of an American-born sport that became a refuge for boys like mine." Can you tell us how the book, and your ambitions for it, evolved?

NT: For the longest time, I imagined this was going to be a more dispassionate, journalistic look at the history of skateboarding, tracing its lineage back to Southern Californian surfing. I collected books about the history of surfing and wrote many thousands of subsequently discarded words about Hawaiian surfers rebelling against the mores of prudish missionaries, about bad-asses like Duke Kahanamoku and George Freeth and Tom Blake. I loved those stories, the unwavering passion for riding waves, the embrace of danger, the rejection of expectations and boundaries and the straight-up refusal to be typical and boring. But that wasn't my story to tell, as it turned out. It wasn't until I allowed my worried-dad perspective to seep in, and gave myself permission to pivot from nonfiction to memoir, that I found the spark of the story, and my voice. Despite the anxiety and risk that came with writing about my family and myself, it felt liberating and thrilling and true to share our story with the world.

KR: Your previous book, A Curious Man, was a biography, and you've worked for years as a journalist; what did it feel like to use your journalistic training on yourself and your family? And were there other memoirs that served as guides or inspiration?

NT: Some of my favorite books have been memoirs, and a few absolutely became beacons for me - most of them by women. Mary Karr is a bold and brilliant storyteller. I'm awed by Cheryl Strayed, Elizabeth Gilbert and Dani Shapiro and their ability to expose flaws and foibles, to tell stories that are relatable and moving and, ultimately, redemptive. I also deeply appreciate the journalistic chops of writers who turn their reporter's gaze on their own circumstances, like David Scheff in A Beautiful Boy, J.R. Moehringer in The Tender Bar, and in William Finnegan's stunning Barbarian Days. And the gold standard for memoir as literature is Tobias Wolff's This Boy's Life. I was relieved to find that skills I acquired as a journalist and biographer were useful in exploring and crafting a deeply personal story. It also helped that I had filled dozens of reporter's notebooks with snippets and observations over the years, never realizing that what I was doing all along was documenting our family's messy, perilous journey. I'd argue that the story of raising rebels like ours, like the best of personal memoirs, is universally about survival.

KR: You write, "Everyone knows a teen rebel and/or they were one themselves." This is exactly what makes the prospect of parenting a teenager feel so harrowing to me presently. Lord knows what the Xanax and Juul of 2030 will be. What felt familiar/unfamiliar to you about the nature of your boys' rebellion, relative to your own?

NT: As a former teen rebel, I thought I knew the extent to which we were in for a version of what my brother and I put my parents through. But I'd convinced myself that: a) my parents gave my brother and me too much freedom, a mistake I'd surely avoid, and b) at least my wife and I wouldn't have to deal with half the shit my brother and I put our poor parents through. My brother Jeff was legendary in his teen exploits - stealing motorcycles, wrecking snowmobiles and cars, and I've yet to meet anyone who tried to climb hand over hand across a moving ski lift cable, only to fall 40 feet onto the rocky side of a cliff, and survive. With memories of my brother as a guide, I really thought I was prepared to raise two boys. Of course, I was wrong. Each generation evolves, and even if I recognized their intentions I was out of my league when it came to the Prozac, Ambien, Molly, and Xanax that became the life-threatening temptations my kids and their friends flirted with. It also didn't help that our home state of Washington legalized marijuana just as my boys entered high school. All these drugs -- worst of all, heroin -- became the villains my wife and I had to learn to battle. So... I'd look back on my parents, and the occasional dime bag of weed or hash they'd find in my room, and think: how quaint.

KR: Unlike staid parenting manuals with their static advice, Kickflip Boys is experiential, and engages all the senses; there's no way to paraphrase out its wisdom, it's a wild, joyous, treacherous ride through time that you embark on with this particular family. It's also a coming-of-age story that applies to the entire family. As a skate dad, can you tell us a little about the transformative impact this sport had on your family? What are some of the mistaken assumptions people have about skating? What were some of your own?

NT: What's been so gratifying is how unimpeachably resonant and grounding the skateboarding experience remains. I'm so relieved to feel thankful, not resentful, for my kids' skate friends and grateful to the off-piste skate culture that dominated our family lifestyle and continues to echo through their lives and ours. Karen, you live in Portland now, so I know you see these kids -- tattooed, pierced, probably stoned... They're the kids most people understandably might avoid on the streets. But I can't begin to convey how much I've learned - about empathy, acceptance, creativity, patience, trust and love - from my kids' friends, who continue to stop by our house, reminding me there was a point to all the turmoil of giving our boys a long leash. They may not all be STEM-savvy, but they're street savvy and worldly; they understand the world in exactly the way I'd hoped they might. They've come of age at an incredibly fucked up time, but they've been shaped by a culture that embraces tolerance for those less fortunate, for those who are different, edgy, not cut out for mainstream expectations. As one tolerant middle school teacher put it, they're the kids who ask why. They’re also just nice boys, boys trying to stay true to some of their skater instincts while making their way deeper into the grown-ups’ world.