The Beyond Binary Anthology: Editor Brit Mandelo on “We Are Love, Infinite” 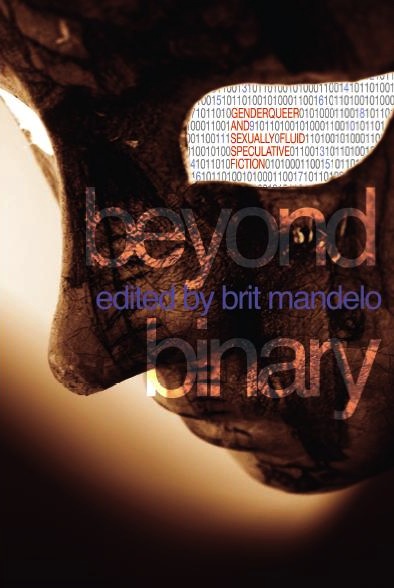 How can you resist an anthology that includes work by Nalo Hopkinson, Delia Sherman, Catherynne M. Valente, Kelly Eskridge, Sonya Taaffe, and Sandra McDonald, among others? I can’t—and when the theme of the anthology is thought-provoking and original, that makes it even harder.

Beyond Binary posits some SF what-ifs that have been at times neglected within the field, but which SF is uniquely qualified to explore. As the jacket copy reads: “Speculative fiction is the literature of questions, of challenges and imagination, and what better to question than the ways in which gender and sexuality have been rigidly defined, partitioned off, put in little boxes?” The stories in this reprint anthology star “people who proudly define (and redefine) their own genders, sexualities, identities, and so much else in between.”

I asked Beyond Binary’s editor Brit Mandelo, what she thinks makes science fiction and fantasy ideal for exploring issues related to gender and sexual identity, and she pointed to the “astounding range of possibilities speculative fiction offers for asking vital questions, reinterpreting or discarding contemporary mores, and breaking boundaries is what makes it ideal for exploring issues of gender and sexuality.”

For Mandelo, it’s not just that these genres allow writers to ask what if, but also “make real whatever we can imagine…This nearly unlimited ability to explore, expand, and explode definitions makes speculative fiction the only form that can effectively transcend and truly embody an equally vast multitude of potential gender and sexual identities. “

Mandelo also points to the iconic Joanna Russ' argument for speculative fiction. Russ wrote that "science fiction […] provides myths for dealing with the kind of experiences we are actually having now, instead of the literary myths we have inherited, which only tell us about the kinds of experiences we think we ought to be having."

Beyond Binary, then, expresses Mandelo’s belief that in science fiction and fantasy, “we can deal authentically with issues of identity and self in a way that is often effaced or barred from traditional literary forms; being able to twist and restructure reality in narrative is a powerful tool for social criticism…the tools for social criticism are natural to and almost inseparable from the same narrative machinery that drives speculative fiction to begin with—that willingness to ask questions, to imagine, and to invent worlds that are not quite like our own.” This willingness allows points of view that have been overlooked or rendered invisible to be seen and experienced.

Editing an anthology is a lot of hard work, punctuated by moments of discovery. I asked Mandelo about her biggest surprise as a reader while working on Beyond Binary. “[It] was the first time I came across Kelley Eskridge's Eye of the Storm,’ recommended to me by another contributor. I began the story with the assumption that the narrator was female-identified, and realized with a shock of delight after a few pages that Mars wasn't being gendered at all by the story—no pronouns, no referents from other characters. That was a brilliant surprise, really provocative and exciting. And, of course, ‘Eye of the Storm’ evolves further from there; my delight was compounded by the explorations of alternative sexuality and relationships that fill out the rest of the story.”

Even though Beyond Binary includes several of big SFnal moments, the ones that require a large canvas and leave the reader with a sense of wonder, these stories also contain something more important: “many compelling moments of personal intimacy—moments stolen in conversation between characters, brief pauses to appreciate the wholeness of self between lovers, slippages of time where characters think about themselves and their identities. Mandelo sees the anthology, in part, “as a collection of personal, intimate stories of self that add up to a bigger picture.”

In closing, I decided to put Mandelo on the spot and asked her if she had a favorite quote or two from the stories: “The line that ends the anthology [by Terra LeMay] is one that stuck with me from the moment I read it. It's short and sweet: ‘We are Love, infinite.’”